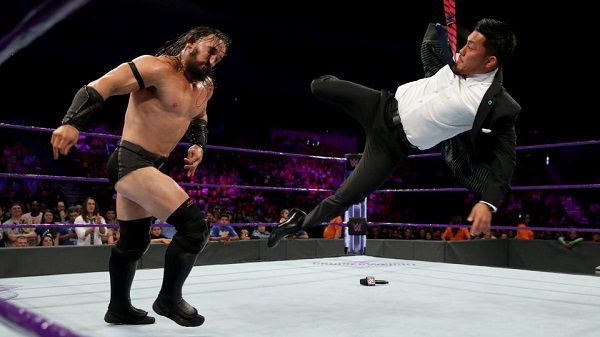 From the Valley View Casino Center in San Diego, CA

Clips of the events that are leading up to the Neville vs. Akira Tozawa match at the Great Balls of Fire PPV airs.

Tonight, Neville will address the crowd. Also, we will see Cedric Alexander vs. Ariya Daivari.

Dasha Fuentes is backstage with Jack Gallagher. She asks him about losing to Tony Nese last week and how to rebound tonight against The Brian Kendrick. Gallagher said he will not make the same mistake twice by letting his gentleman nature get the best of him.

Kendrick comes out to Gallagher’s music with an umbrella while wearing a suit and a fake mustache. Kendrick says that Gallagher is a charicature and an embarrassment. He calls him a joke and someone who should be the laughing stock of England but England is also a laughing stock on its own. He then calls Gallagher a pale imitation of William Regal.

Thoughts: No Aries here tonight, which is a little bit odd since they former an alliance last week. The new story with Gallagher appears that he is going to keep getting tested and attacked until finally snapping. It also seems like this is going to lead to a rematch and a possible feud.

Dasha is backstage with Drew Gulak. She asks him about a rematch against Mustafa Ali as we saw him lose last week. Gulak is upset they did not focus on his “ground assault” and despite that it pointed out how his No Fly Zone message is correct. Drew then starts a “safe and sound, feet on the ground” chant through a megaphone. Ali interrupts then asks Gulak why he hates exciting, high-flying action then suggests it might be because high-flying is something “Drew just can’t do.” I like how Ali stood up for his offense by hinting that Gulak is doing this because he is jealous of the high-flyers in the Cruiserweight Division.

They jaw at each other then trade moves until Gulak drills him with an elbow strike. Gulak taunts Ali about his high-flying and promises to make him learn but Ali fights back. Ali chops Gulak hard in the corner but gets booted in midair trying a crossbody in a spot that was a bit mistimed. Gulak cranks Ali’s neck then turns him inside-out with a clothesline for a two count. Ali tries to escape from a chinlock but Gulak sends him back down. They trade go-behinds until Gulak suplexes him into the corner for a nearfall. Ali comes back with a tilt-a-whirl into a DDT as both men are down. Ali is up first and fires away. He takes Gulak over with a hurricarana then hits a rolling neckbreaker for a two count. He sets up for a top rope rana but gets shoved off. Gulak then realizes he is on the top rope and starts to shake a bit. He then smiles and tries a Super Fly splash but misses then Ali puts him away with a La Magistral (6:55) **1/2.

Thoughts: I liked the finish a lot as it played into their feud as Ali messed with Gulak’s head by suggesting he is jealous of his offense and incapable of doing anything from the top rope. They had some rough spots in the beginning but turned it into a good match as these two have one of the more underrated feuds in the company.

We are shown a tweet from Neville where he talked about making Tozawa suffer.

Ariya Daivari is backstage. Noam Dar aplogizes as he meant to throw Cedric Alexander’s bag into the river and Cedric is the one that he should blame. Ariya said $15,000 is nothing to him and if he saw that on the ground he would not even bother to pick it up. Dar is thrilled he does not have to pay back Daivari as he blames Alicia Fox for ringing up his phone bill due to constantly wanting to face-time. Daviari takes teh phone and says he does not want Dar’s money but Dar still owes him as he smashes the phone against the wall. Daivari is bland, despite the new gimmick. He does not stand on in any way.  The story was Dar trying to motivate Daivari by blaming Alexander for having his bag tossed in the river but Daivari did not care and said Dar owes him something other than money.

Daivari lands a few chops but Alexander floats over in the corner and comes back with a headscissors. He follows with a dropkick then hits a springboard clothesline for a nearfall. They trade strikes until Daivari tosses a charging Alexander into the corner. Alexander gets tossed outside where Daivari runs off of the apron and hits what I think was supposed to be a knee smash. Back inside, Daivari works a chinlock on the mat. Daivari catches a handspring attempt and puts Alexander in a rear choke. Alexader gets his foot on the ropes then fights back. He gets a nearfall with a handspring enziguiri then is on the apron where Dar runs out. Alexander gets two with a small package then boots Dar off of the apron and yells at him but Daivari puts him in a hammerlock then hits a lariat for the surprise win (4:59) **. After the match, Dar heads in and attacks Alexander. Dar then grabs the mic and tells Alicia there chapter with Alexander is over and they can now move on as he mocks Rocky by saying “Yo Alicia, we did it!”

Thoughts: The action was fine for what it was. However, this Dar/Alexander feud is just awful and needed to end weeks ago. Its certainly not doing Alexander any favors. I don’t mind Daivari getting the win as the focus was on the feud but he should get a better finisher than that, which would be a more impressive move coming from a bigger man.

Neville comes out to the ring. The crowd rags on him as he smiles before saying in two weeks he will defend his Cruiserweight Championship against his next so-called challenger. He then says Tozawa is being mislead by Titus O’Neill and calls the crowd delusional for thinking Tozawa as a “Snowball’s chance in hell” of beating him. The crowd starts with a mild chant of Tozawa’s then Neville warns Tozawa that in two weeks, he should not show up as the moment he steps in the ring he will be slapped in the face with the realization he does not belong in his ring. And, he can just ask those before him as he will get hurt. Tozawa then comes out to the ring as Neville calls him the “flavor of the month.” Tozawa keeps chanting as an answer to Neville’s questions and the crowd plays along. Neville grows increasingly frustrated as Tozawa keeps chanting. Tozawa then ducks a clothesline and kicks down Neville, who crawls up the ramp as the crowd chants along with Tozawa. The crowd was getting behind Tozawa here as they’ve built him up well. And it hyped up the Cruiserweight Championship match at Great Balls of Fire too. Strong segment to end the show.

Final Thoughts: I liked the Neville/Tozawa segment and the Gulak/Ali stuff was solid but the rest of the show was forgettable at best. The Dar/Fox stuff continues to bog down the show and should be the opposite of what 205 Live should strive to be as its nothing more than a terrible, WWE romance storyline. The focus was not on the in-ring action this week either and having a good, competitive match would have helped the show. Guys like Gran Metalik, Rich Swann, TJP, and Tony Nese were nowhere to be found.