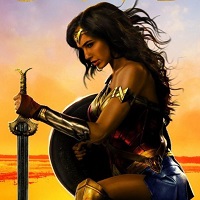 It’s taken 75 years to get DC Comics’ most iconic female superhero her own solo outing on the big screen and the pressure to succeed was off the charts.

After debuting as Diana Prince/Wonder Woman in last years’ critically maligned Batman v Superman: Dawn of Justice, Gadot shows off some real character depth. Her ability to kick ass is on full display again, but it’s her genuineness and heart that steal the show. Not to mention her incredible chemistry with Pine’s Steve Trevor.

And that’s what Wonder Woman does better than just about any of its modern predecessors. The genuine character moments are aplenty throughout and always handled deftly by Jenkins; putting character ahead of action in every scene.

The story by Zack Snyder (Man of Steel, Batman v Superman), former Wonder Woman comics writer Allan Heinberg and Jason Fuchs (Pan) takes place largely via flashback to World War I. Diana is portrayed as naïve, but incredibly intelligent and trained in as many forms of combat as she is fluent in languages. Both are great sources of humor and excitement throughout. Especially the frank, yet hilariously awkward, conversations Diana and Steve have about male and female relations.

When Captain Steve Trevor, an American spy working for British Intelligence, crashes on the hidden island of Themyscira while on the run from German troops, Diana is compelled to get involved as she believed the Greek God of War, Ares, has returned and is manipulating the world of men into fighting. Against her mother Hippolyta’s (Connie Nielsen) wishes, she steals several pieces of Amazon armor and weapons before escorting Steve back to London. Once there, she finds that the world of men in 1918 is very much that…a world belonging to men where women are not looked at as equals.

As the story unfolds, it’s easy to make comparisons to other films that used a similar setting, such as Captain America: The First Avenger and Raiders of the Lost Ark. But probably the most comparable superhero film to Wonder Woman is Richard Donner’s Superman: The Movie. From an alley scene where Diana and Steve are confronted by German spies to the first time Diana steps out in full Wonder Woman garb and takes on a hail of machinegun fire from entrenched troops, Gadot is nothing short of inspiring.

There are even plenty of fun moments for comics fans to enjoy, whether they love her classic interpretation or even if they prefer the more modern comics. Fans of Geoff Johns’ and Jim Lee’s New 52 Justice League run will take note of Diana’s first time with ice cream.

While the film has plenty to love, there are moments that don’t work quite as well. While the movie may seem a bit on the long side, the time spent in Diana’s childhood goes by incredibly fast and almost too quickly to get a good sense of the world around her and the depth of her training. Most of the action scenes are breath-taking, especially the scene when Wonder Woman along with Steve and a few other compatriots take back a village overrun by German troops. But the final battle sequence is a bit too dark and a little too CGI-heavy. Not unlike plenty of other superhero movies in recent memory.

The build up to the Ares reveal is a nice twist that attempts to subvert expectations and almost fully works, though it’s not hard to see coming.

Despite these few shortcomings, Wonder Woman is just the shot in the arm the DCEU needed right now. While it’s too early to say things have turned the corner yet (Justice League is out in November), it’s fair to say that Wonder Woman finally got the movie she deserved. Regardless of what comes after or what came before, she has arrived in a big way. Fans who’ve been waiting a long time to see the preeminent female superhero on the big screen can take comfort that Wonder Woman will go down as one of the best the genre has to offer.