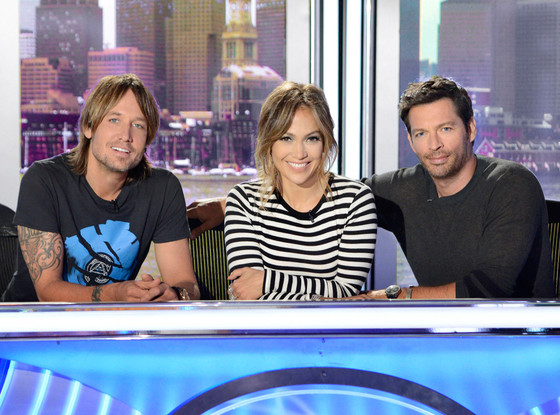 Oooooh woah ooooh woah. This season of American Idol might just be the best yet. It’s hard to believe it all started 13 years ago with a small town girl , Kelly Clarkson, and her runner-up Justin Guarini, who held an uncanny resemblance to Sideshow Bob. They’ve gone through many combinations of judges from Simon Cowell to Ellen DeGeneres, and cranked out some award-winning stars, including Carrie Underwood, Phillip Phillips and Kelly Clarkson, and others that fell short (Taylor Hicks? WTF?).

In its 13th season, Idol seems to be in a groove, with the perfect trifecta of idol judges: the incomparable Jennifer Lopez, whose infectious laugh and sweet demeanor with the contestants has already proven successful; Keith Urban, who charms the crowd with his hot Aussie accent and flowing locks; and last but ABSOLUTELY NOT least, Harry Connick, Jr. I don’t think I realized when it was first announced how much I loved HCJ or how much I would love him on Idol but it has been sheer perfection. He, like some of the other judges, actually has musical knowledge and therefore gives much better critiques to the contestants. In addition, HCJ manages to have me rolling on the floor laughing every week. I never knew he was so funny. “Don’t worry, Jen, I’m not fooled by the rocks that ya got,” he casually says to J.Lo at the judges table. Or falling on the floor, pretending he was being healed, when a hippie contestant who believed he could cure people tried out. Ohhh, HCJ, talented, smart, knowledgeable, funny, and oh so handsome, is there anything you can’t do?

Sorry, I just composed myself. Moving on. I also enjoy the fact that there seems to be far less horrific auditions that were so obviously staged for ratings. It makes the show more believable and makes your ears bleed less, which is always appreciated. Another thing that is different this year, is that they’ve toned down the dramatic sob stories that seemed to be commonplace in years past. Don’t get me wrong, I’m not heartless, I feel sorry for some people who have come a long way, but you don’t need to spend ten minutes explaining how one contestant broke their arm when they fell out of a tree at the age of four, but still managed to play the guitar now or sing even though they had strep throat in high school. If I wanted to hear the story of Samantha Jane, the girl who sold all her furniture and worldly possessions to devote her life to music, I would turn on Lifetime.

There have been a fair amount of hopefuls so far, ( a Patriots cheerleader, a couple of dudes who sing decently and play guitar) but no one that stands out to me as someone who could be a clear-cut winner yet.  If it was a joke competition, I would have to give it to the guy who sounded like Dave Chappelle, and told this joke:

– Why did the dog go in the water?

His singing was sub par, but that joke? Pure gold.

I am looking forward to what tonight’s installment will bring, perhaps some more HCJ comedy, and hopefully a contestant I can start rooting for. Tune in Wednesdays on FOX!