For the seventh season in a row, Justin Rozzero will be spending the winter in section 103 of the Dunkin’ Donuts Center watching the Providence College Friars battle for Big East supremacy. Throughout the season, JT will take some time to talk about the team, personalities and general college basketball atmosphere that goes down around him. You can find the full archive here.

In the middle of last year’s college basketball season, an eclectic group of fans began showing up on the floor of the Dunkin’ Donuts Center during Providence Friars games. The rowdy fanatics were decked out in black and white and all of Friartown, and beyond, would soon learn their gimmick: The Cooley World Order. As a takeoff on WCW’s New World Order stable, originally led by Hollywood Hogan, Scott Hall and Kevin Nash, the newly christened cWo made it their mission to honor Coach Ed Cooley, bring awareness to the program and show as much support as they could to this team on the rise. As the season moved along, their profile raised and the cWo became a staple of home Friar games, and even one road game where they completely took over the Rutgers Athletic Center.

I recently caught up with the cWo’s leader, Hentonwood Hogan (a mash-up of Hollywood Hogan and Friar junior and fan favorite LaDontae Henton) to chat about how the group (which also includes Big Sexy, StingFriar and Scott “Federal Hill” Hall) was formed, their history as wrestling and hoops fans and their plans for the 2013-14 season. 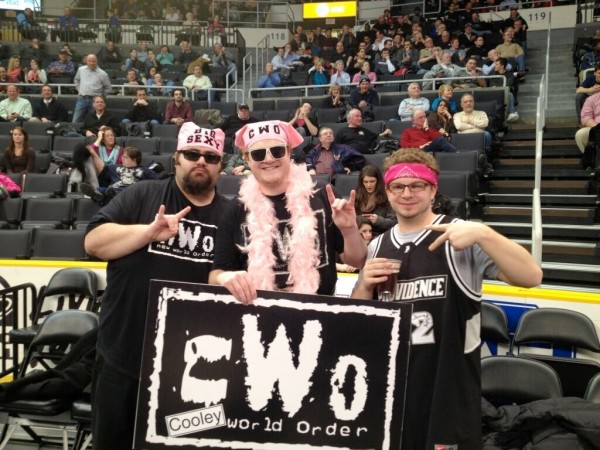 Hentonwood Hogan: I have been a wrestling fan since I can remember. I used to come home from church and watch wrestling every Sunday. I was a huge fan of the Ultimate Warrior, Macho Man, and, of course, Hulk Hogan, but my passion for wrestling really developed during the nWo days (which began in 1996).

I have been a Friar fan my whole life. My grandmother used to take me to games for my birthday, so I grew up watching Austin Croshere, Eric Williams, and God Shammgod.

JT Rozzero: Fantastic. Do you still follow wrestling today, or did you fall off as a fan? Also, tell me about where the cWo concept first developed.

Hentonwood Hogan: Unfortunately, I do not keep up with wrestling as well as I would like. I watched Hell in a Cell (WWE’s most recent pay-per-view offering), but my real love and dedication for wrestling stopped when Kane got Lita pregnant (in 2004). I watch when I can, but it is hard for me to manage between school and work. I know Big Sexy and Scott “Federal Hill” Hall do not miss a single episode, as they record TNA, Ring of Honor, and WWE.

The cWo concept first developed in the summer of 2012. “Federal Hill” and I were hanging out in his man cave, when I saw his WCW Championship Belt with nWo painted on it. We had been fans of PC for a while now,and I said “we should dress up like wrestlers at Providence College basketball games” he replied, “PC is back in white and black, it works.” So, we went out and got the sign made, Big Sexy is cool enough to let us use the official belts, and the PC community has been so receptive.

JT Rozzero: Awesome back story there. What was the first game you showed up in the gear for? You have some great seats, how did you come about those? Also, tell me about your favorite moment from your first season as the CWO.

Hentonwood Hogan: The first game we showed up in the gear was 1/5/2013 for PC’s conference home opener vs. DePaul. There was a huge lead-up to the event. I went on the Friar message boards and posted as much as I could. I tried to emulate the voice of Hollywood Hogan in every post. At that point, the fanbase had no idea what to expect. We started doing some nWo style promos before a few home games last year, and I even tried to copy Scott Hall of the nWo’s “big surprise” gimmick. As far as the seats are concerned, the cWo wanted those seats and you know that the cWo takes what it wants.

My favorite moment from the first season of the cWo has to be when we drove to Rutgers and were the loudest people in the RAC. After the game, Eric Murdock came up to us and introduced himself, he thanked us for the support and told us that the players really appreciate the support too.

JT Rozzero: It definitely seems like you gained momentum as the season went along. Which game do you think was the one that pushed you guys from “what the hell is this?” to “OK this a great way to engage fans and is pretty damn original and funny!”

Have you met or spoken to the school or Coach Cooley about ways to increase your involvement? Or do you prefer to be rogue? Cooley joining could be your Eric Bischoff moment!

Hentonwood Hogan: It didn’t take long. By the second home game (Syracuse), at least eight people wanted a picture. I couldn’t believe it, as our original intent was to inject some fun into the fan base. I never thought that someone would want a picture with us. I think all of the credit goes to the team and Coach Cooley. If they aren’t doing their jobs, then we just look like weirdos dressed up as wrestlers.

We have spoken with the administration, and they have been extremely receptive. We sent Coach Cooley a shirt, but I am not sure if he wears it or not. He always gives us shoutouts during the Ed Cooley radio show and that is awesome. I think the administration has to tread lightly with our gimmick because we do say and do some things that don’t reflect the university’s message. I understand, but that is the nature of the Cooley World Order.

JT Rozzero: That is great that the school has supported you, as they need all the support they can get at such a crucial time in the program.

Turning to hoops, what are your thoughts on the split and forming of the new Big East? Which of the new schools are you most looking forward to seeing this season?

Hentonwood Hogan: I think that the conference split is great! The future of the conference is secure, and it is comprised of like-minded institutions. More importantly, I would like to apologize to the rest of the Big East, because Cooley is not going to leave any championships for the rest of them.

I am looking forward to seeing every team at home. I am ready to personally welcome the to Providence, cWo style! Visiting teams aren’t ready to play in Ed Cooley’s Ball So Hard University. The energy is going to be great.

JT Rozzero: Love it! OK it is prediction time. We all know Ice Cotton and Kadeem Batts are poised for big years, but who are you targeting as the breakout Friar this season?

Also, where does the team finish in the Big East and do they finally get back to the Big Dance for the first time since 2004?

Hentonwood Hogan: No question, Kris Dunn will be a whole different animal this year. Healthy and ready to distribute. It was said by John Rooke and I am going to repeat it: Kris Dunn will record more than two triple-doubles this year. (Editor’s Note: This interview was conducted  before Dunn injured his shoulder last weekend)

I think this team has the potential to get to the dance. In fact, I have faith that they can make it through the first weekend. As for the Big East Tournament – I have one question for any unfortunate team that comes between the Friars and the Big East Title” Whatchu gonna do, brotha, when the Cooley World Order runs wild over you??? 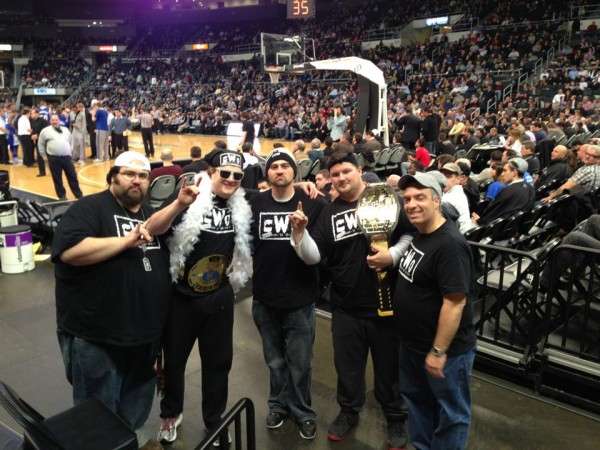 JT Rozzero: If your predictions hold up, it is going to be a hell of a year to be a Friar fan. Ok… Let’s wrap this up with a rallying call. What do you have to say to all the Friar Fanatics out there??

Hentonwood Hogan: First and foremost get out to Ed Cooley’s Ball So Hard University and cheer on the state’s best basketball team. You can put student’s butts in the seats by rocking the hottest form of apparel in Friar Nation (the cWo t-shirt). Most importantly, turn the Dunk into the loudest building in the country, be “Loud, Proud, and a tad bit Ornery!”

JT Rozzero: That about sums it all up! Thanks for the time and look forward to seeing you raising hell at the Dunk this season!

You can learn more about the Cooley World Order, as well as order an official cWo t-shirt, at their website.