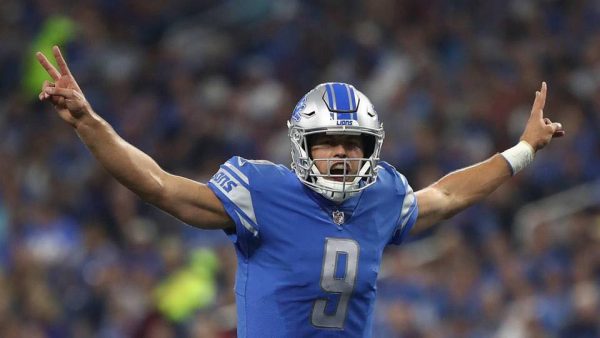 Thanksgiving is a great day for hardcore fans to take a deep breath and enjoy three games, one at a time, old school style. No Red Zone tracking of eight games at a time. Good news for those distracted by food and family but bad news if you are allegedly a franchise quarterback with the NFL Nation spotlight shining bright on you. Chicago marched into Detroit looking to show a national audience that their first place standing is no fluke. One team pays their QB $27 million while the other team started their $4 million backup making his first start since 2014. The Lions looked to be in good shape at home with the game tied in the fourth quarter but it turned into a disaster as two brutal Matthew Stafford interceptions gave the Bears the game. One pick six and the other in the end zone trying to make up for it by tying things up late. Teams are going to think twice in the future about rewarding QBs with monster contracts after a couple of decent seasons. Stafford has led the Lions to zero playoff wins as they continue to muddle in mediocrity. We are seeing more young and talented QBs coming out of college every year ready to produce as general managers are going to lean towards Washington’s approach with Kirk Cousins and bleed out their QBs with franchise tags before committing $100 million guarantees.

Down the stretch we are going to see multiple teams fighting for limited space in the playoffs and like last year it may come right down to the fourth quarter of the final game. The wild cards in each conference are going to be decided by a couple of key plays down to the wire. Let’s take a deep dive inside the crazy Wild Card scenarios:

Washington: Two games vs. the Eagles, at Jacksonville and Tennessee and home for the Giants.

Philadelphia: Two vs.Washington, at Dallas, home for Rams and Texans looks too challenging.

Projected 7-9, out of playoffs

Seattle: Four out of last five at home including Vikings and Chiefs and three division patsies. Huge tiebreaker win over Carolina puts them in the driver’s seat

Carolina: They must hope the Saints have nothing to play for in the last game but it looks like the Seattle loss was a crusher.

Projected 10-6, out of playoffs

Minnesota: They need to split at New England and Seattle as it looks like that tie from early in the season may save them.

LAC: Fortunate to be up two games as they have the toughest remaining schedule.

Tennessee: Four out of five at home and Giants on the road gives them a pulse.

Denver: Winnable road games left vs. Raiders, Bengals and 49ers gives them a chance to run the table.

Indy: Three road games vs. each division rival and home for Cowboys and Giants.

Projected 9-7, in because of head-to-head tiebreakers over Denver and Tennessee.

“I can do a better job, though, I didn’t help our guys up front – I was holding the ball too long. I got us in negative situations, taking some of these sacks. I’ll look back at the film and get better from it, and improve.” – Marcus Mariota