Well, hello all you out there in comic-book reader land and welcome to a long since overdue installment of Weber Has Issues. My columns have historically been about finding new comics that anyone can enjoy, and this edition shows a pristine example of that.Today I’m taking a closer look at a new creator-owned book from one of my absolute favorite writers, who just so happens to be writing about one of my all-time favorite historical periods. Join me as I break down the celebrated team of Ed Brubaker and Sean Phillips’ latest creation, a dark glance at the seedy underbelly of stardom in “The Fade Out”.

The Fade Out #1 ($3.50, Image Comics, written by Ed Brubaker and illustrated by Sean Phillips) is set in post-World War 2 Hollywood, often the literary realm of one of my favorite prose authors, James Ellroy (L.A. Confidential). This first chapter, “The Wild Party” (which takes place in the Fall of 1948), sets the stage for a dark mystery. Our POV character is screenwriter and war veteran Charlie Parish, who begins the story in a hungover daze. He tries to remember the cloudy events from the previous evening and they slowly return to him (and we’re introduced to the key players of the book). As his mind clears, Charlie discovers something quite terrible about the aftermath of a wild evening amongst the Hollywood elite, and sets off to get some answers.

Parish is haunted by ghosts of the war and his failed marriage, but is apparently a talented writer who does daily rewrites for movie star Earl Rath’s latest picture. Rath resembles a younger Clark Gable (with some Humphrey Bogart thrown in) and is a larger-than-life actor whose parties are well-known. We also meet beautiful ingenue Valeria Sommers, an actress who is perhaps too naive for the business she’s chosen. Charlie’s is shown to be a loyal friend to his pal Gil Mason, a victim of the era’s terrible “Red Scare” (where suspected communists in Hollywood were blacklisted, often without any real evidence). It seems Charlie has to bail out the confrontational Mason out of jams quite often—he picks fights with big shots like Bob Hope. There’s also a character named “Flapjack” who is based on a grown-up version of Buckwheat from the Little Rascals. So far, the cast are interesting and I’m certain there’ll be more fascinating characters introduced as we go deeper into the mystery of “The Fade Out”.

The story is a classic mystery, character study and exercise in ‘noir’. Paranoia reigns supreme and you can smell the whiskey and cigarettes coming right off the page. Phillips’ art convincingly puts us into the world of late ‘40s Los Angeles and all of its excesses. This is an era of Hollywood monoliths; the studios control everything and are willing to go as far as it takes to keep scandals off the record and hushed up.

Like almost all Image Comics these days, this comic is for grown-ups only (there’s a semi-graphic sex scene) and there’s profanity along with lots and lots of drinking. However, it’s an honest representation of the time the book is set in, and I’d rather the creators not whitewash the brutality of the era (not too different from what AMC’s “Mad Men” has done for the ’60s). We’re adults, we can handle it. 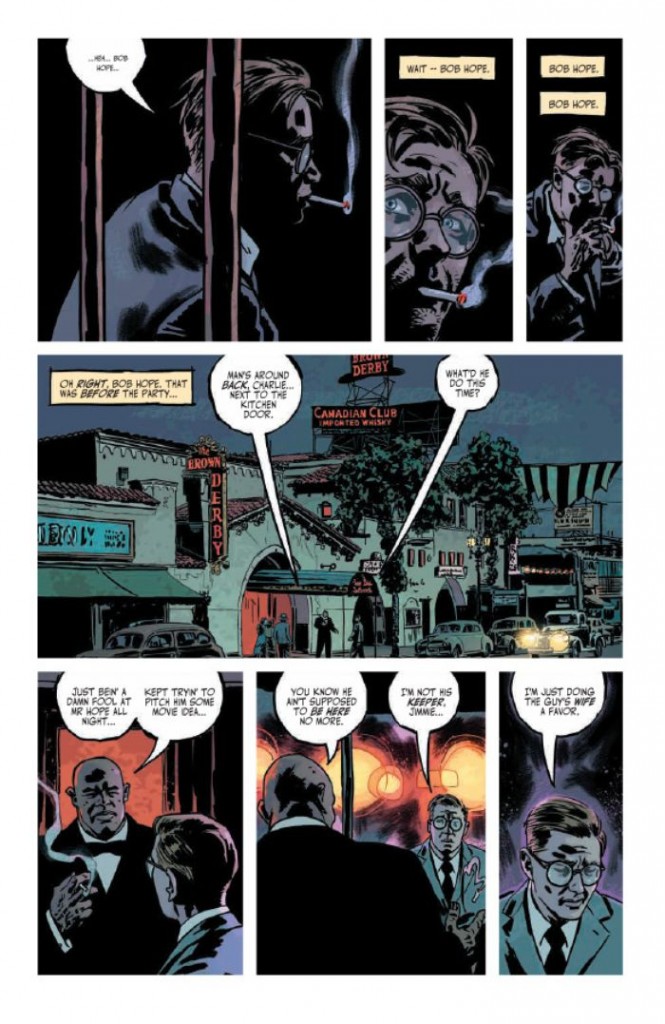 I am a staunch fan of the writer James Ellroy, and this certainly belongs up there with some of his best. It’s certainly not a rip-off, but it works as a complementary piece to stories like “The Black Dahlia” and “L.A. Confidential.” Ellroy tends to write from the perspective of private investigators and detectives, but Brubaker’s writing is from more of an insider’s point-of-view. If you like this story, go out and find Howard Chaykin and David Tischman’s excellent “American Century” comic from Vertigo. It came out in 2001 and lasted 27 issues, and covers some similar themes (and goes places other than Hollywood). There are certainly more stories to be told in this genre and I can’t wait to see where “The Fade Out” goes.

Brubaker and Phillips recently signed a five-year exclusive deal with Image, and they’ve moved on to “The Fade Out” immediately after together completing twenty-four issues of “Fatale,” also from Image. I opted to wait for a collected edition on that one, and have considered getting it digitally, but in the back of “The Fade Out,” Brubaker talks about the value of print comics and putting print-only extras in the single issues. This book features an essay by Badass Digest’s editor-in-chief (and Hollywood historian, check out his video blogs on famous Hollywood/LA film locales on badassdigest.com) about an actress not too dissimilar to The Fade Out’s Valeria Sommers. It’s well written and helps set the tone for what is a tremendous comic that you should read (if you’re over 18). I suppose I’ll have to track down all of Fatale’s back issues too (not to mention other Brubaker/Phillips creations “Criminal” for Marvel and “Sleeper” for DC).

Who would like this: People who played “L.A. Noire.” Fans of “L.A. Confidential” and James Ellroy, Mystery fans, People who watch “Mad Men,” and people tired of superheroes and crossovers.