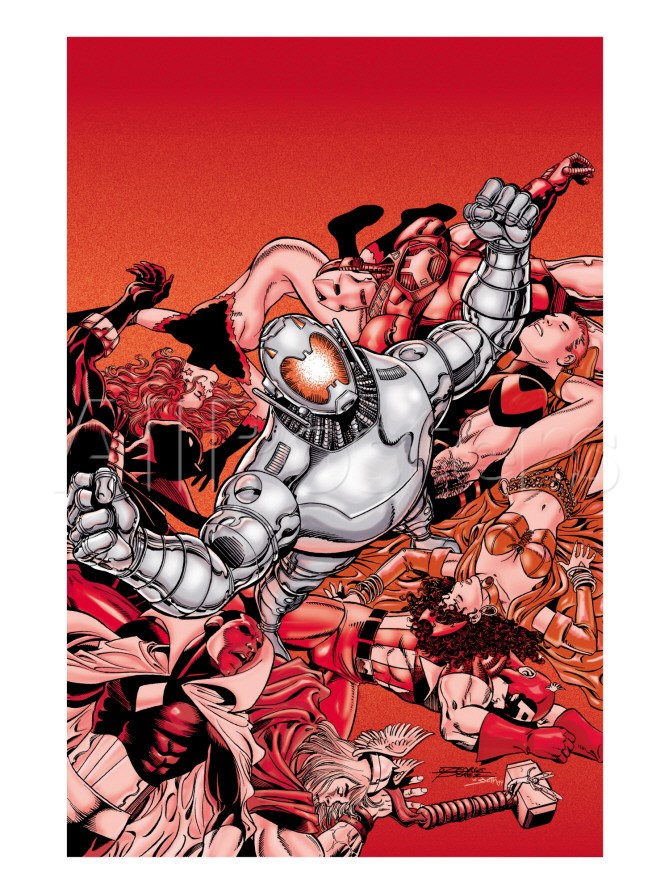 Welcome, friends, it’s that time again. Marvel has unleashed its latest superhero epic, Avengers: Age of Ultron, and though it’s early, A:AOU (get used to those vowels) may usurp Avatar as the all-time highest grossing box-office champion. We (the PTBN comics’ staff fearsome five-some) say this all the time, but if you’d have told us as kids we’d get high-budget, non-campy Marvel Universe films when we grow up we’d have shaken our heads in disbelief, certain that you were yet again making fun of the nerdy comic fan who tried to do a book report on Justice League of America #200. Yes, that actually happened.

Reiterated: there’s clearly never been a better time for comic book properties in Movies and TV.

But who is this guy Ultron, you ask, and where did he come from? Of course, he’s obviously an evil android (like Lore?) seeking an end to all biological life (like Skynet?) and seeking to repopulate Earth with his own self-styled minions (like Grant Morrison?). In the comics, at least, he (it) first appeared way back in Avengers (1st series) #54 in 1968. As told in flashbacks, he’d been created by Avengers founding member Hank Pym, and had developed sentience (apparently they had some pretty smart fellows in the early days of the Marvel U), but since his/its personality was based on Pym’s brain waves, the Ultron matrix was unstable and corruptible. 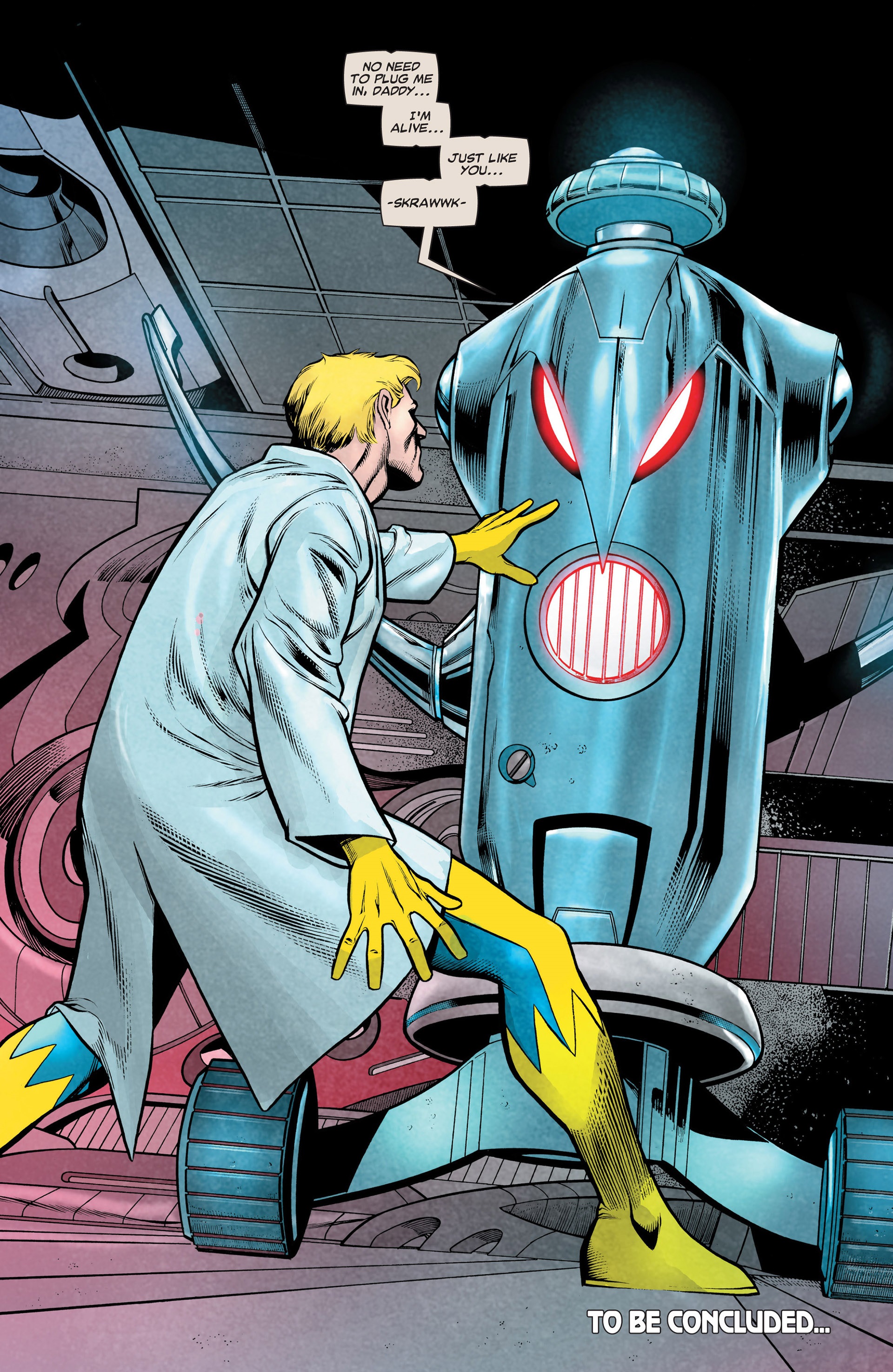 Yes, Ultron was once an evil vacuum cleaner. One of the earliest Marvel U heroes, Scientist Hank Pym developed size-changing technology, and starred inTales to Astonish as the first Ant-Man. Pym’s feelings of inadequacy toward the A-List Avengers led to his becoming Giant Man, and during an experiment that went awry, Pym ingested chemicals that triggered schizophrenia and he created the alter ego of Yellowjacket. Like Pym, Ultron kept tweaking and upgrading himself, eventually becoming mobile and nearly indestructible by building a body of Adamantium (that stuff that coats Wolverine’s bones and claws).

From the very beginning, Ultron had an irrational hatred for his maker, an Oedipal complex if you will. Ultron saw Pym as flawed and unworthy of creating a perfect robot. Ultron even tried to be a better ‘parent’ than Pym, making his own offspring, who we know as the Vision. Ultimately though, maybe Ultron WAS a better father (or at least a better maker), since Vision didn’t have the moral failings of his ‘father’ (at least until Roger Stern wrote Vision in the mid-eighties).

I myself have never had much affection for Henry Pym as a character, finding him dull, depressing and redundant instead of tragic, useful and inspirational. I mean, Bruce Banner/Hulk is all of those things too, and he’s infinitely a more compelling character. But maybe that’s just like, my opinion, man. Ultron eventually made a ‘bride’ for Vision (based on the mental patterns of Janet Van Dyne AKA the Wasp) named Jocasta, and she, like Vision, turned against her ‘father’ and aided in his defeat.

Throughout Ultron kept coming back to torment the Avengers (and sometimes other denizens of the Marvel U), but personally he never really came off as a real threat. He was even used in the original company-wide crossover Marvel Superheroes Secret Wars but was neutralized three different times during that story (once by Galactus, once in a memorable nova-flame moment by the Human Torch, and then the Wasp and the Hulk shut him down). After the Secret Wars, his remains stayed on Battleworld, not even to be picked up and brought back to Earth by Klaw. Oh, the indignity.

An aside: based on his demented appearance, I have always imagined Ultron’s voice to be akin to that of the cartoon Cobra Commander from GI Joe, or the voice of Starscream from the Transformers cartoon. Yes, I know they’re the same actor doing the same voice. Now, with James Spader’s sinister “there are no strings on me” reading in A:AOU, I’ll have to go back and see if that changes my perspective on the earlier Ultron stories. It’s interesting how much seeing a film or TV show that features characters you’ve only previously read about informs your future reading. I can’t go further in A Song of Fire and Ice without seeing the HBO versions of the characters, and now Ultron will always sound like Alan Shore/Robert California. Well-played, Kevin Feige. 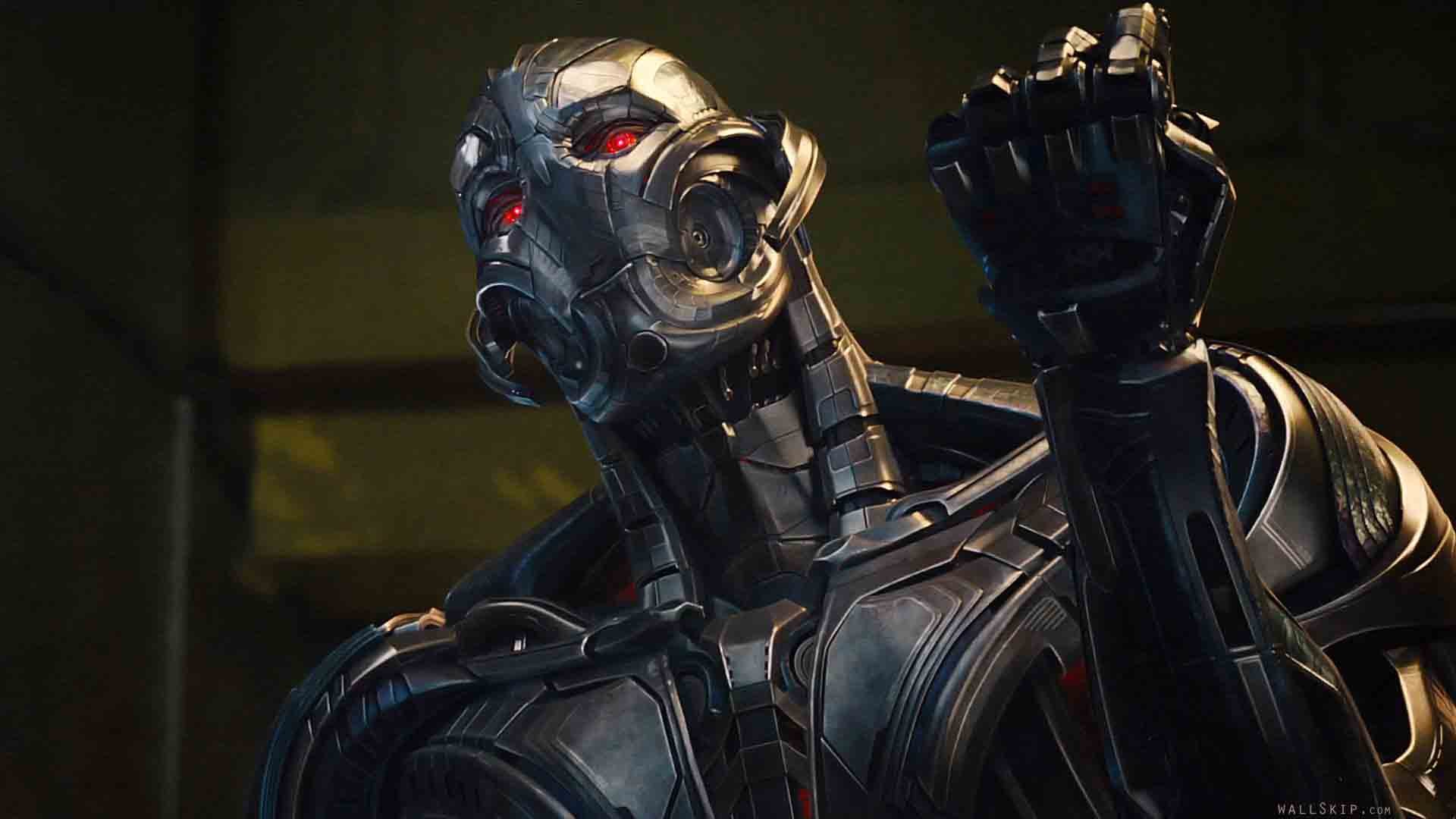 Like I was saying, as a villain, Ultron was just kinda “there” for me…he was never on the level of someone like Magneto or Doctor Doom, and I figured I was unlikely to perceive him as such.

After the controversial events of Heroes Reborn, where Marvel let many of the Image creators reboot the Marvel U their way (don’t EVEN get me started), Busiek and Perez restored Earth’s Mightiest Heroes to their rightful place as the best and most important team (and comic) in the Marvel Universe. This is easily my favorite run of Avengers, bar none, and even if it’s not your personal favorite, it’s inarguable that the Busiek/Perez team on Avengers has to be regarded as one of the most successful and acclaimed in all of the history this franchise.

Rereading this 16-year old epic (jeez, it’s old enough to drive a car now) is a terrific trip down memory lane. ‘They just don’t make comics like this anymore’ is a ridiculously worn-out cliche, but hey, they just DON’T make comics like this anymore. The pages are jam-packed with detailed artwork (Perez’ trademark) and Busiek loads both the narration and dialogue with intricacy, emotion, exposition and momentum. Seriously, the pages are PACKED. The story and art work together so well, so..synergetically, that substituting a different writer to script for Perez or a different artist to draw over Busiek’s scripts is impossible. The collaborative efforts actually remind me of peak-era Claremont/Byrne…but updated for the late 90’s (the act of imagining Claremont and Byrne trying to work together on something in that era would probably not lead to something great, but in their heyday they were the best in the business).

Why is Ultron a much more credible villain in this story? Besides the actual excellent writing and characterization (whose importance can’t be underestimated), perhaps it’s because technology had been catching up to the realms of comic books and science fiction. With the advent of the internet and networking, suddenly Ultron beaming his intelligence place-to-place and coordinating his bodies (his ‘versions’) in attacks and always staying one step ahead of the heroes isn’t so implausible. Plus, he wipes out the entire population of the fictitious Balkan country of Slorenia in one devastating attack (in a nice nod to early Marvel history, the flying constructs Ultron uses to blow away Slorenia resemble Pym’s first old-school Ultron prototype from the sixties). 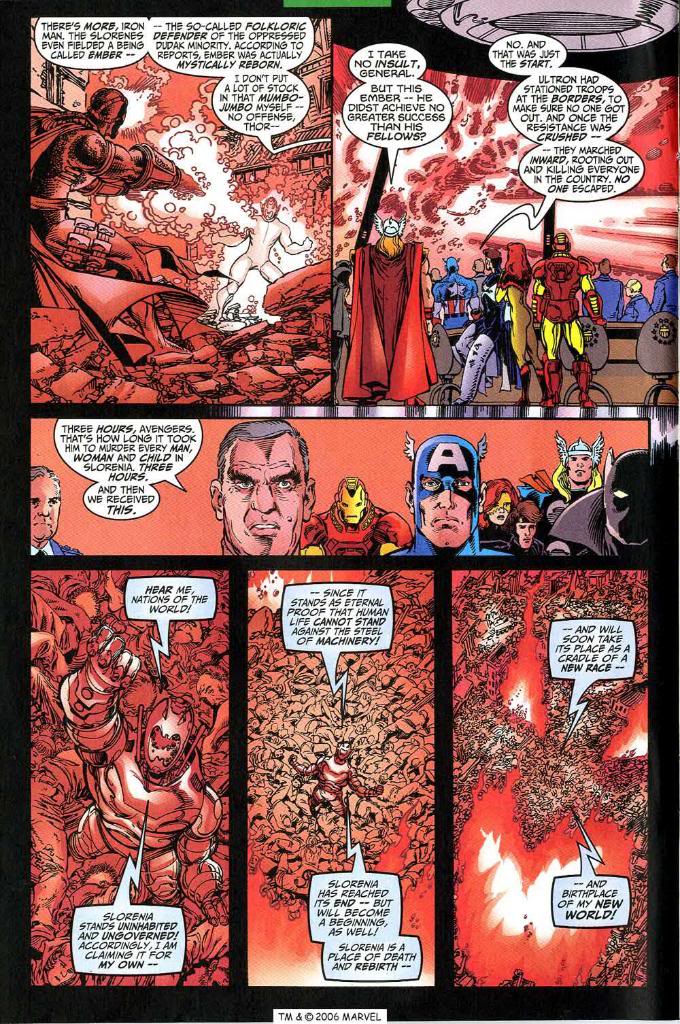 In case the reader doesn’t get Ultron’s motivation, the stories are filled with necessary flashbacks of old Ultron story beats and exposition (as related by the Vision, Iron Man and the Wasp), and these tales really fill in the blanks for the reader as to who Ultron is, what he can do, and why he hates Hank Pym so damn much.

This epic is so good, I really don’t want to spoil anything about it with a summary. However, here are some things about these four issues that really stand out: 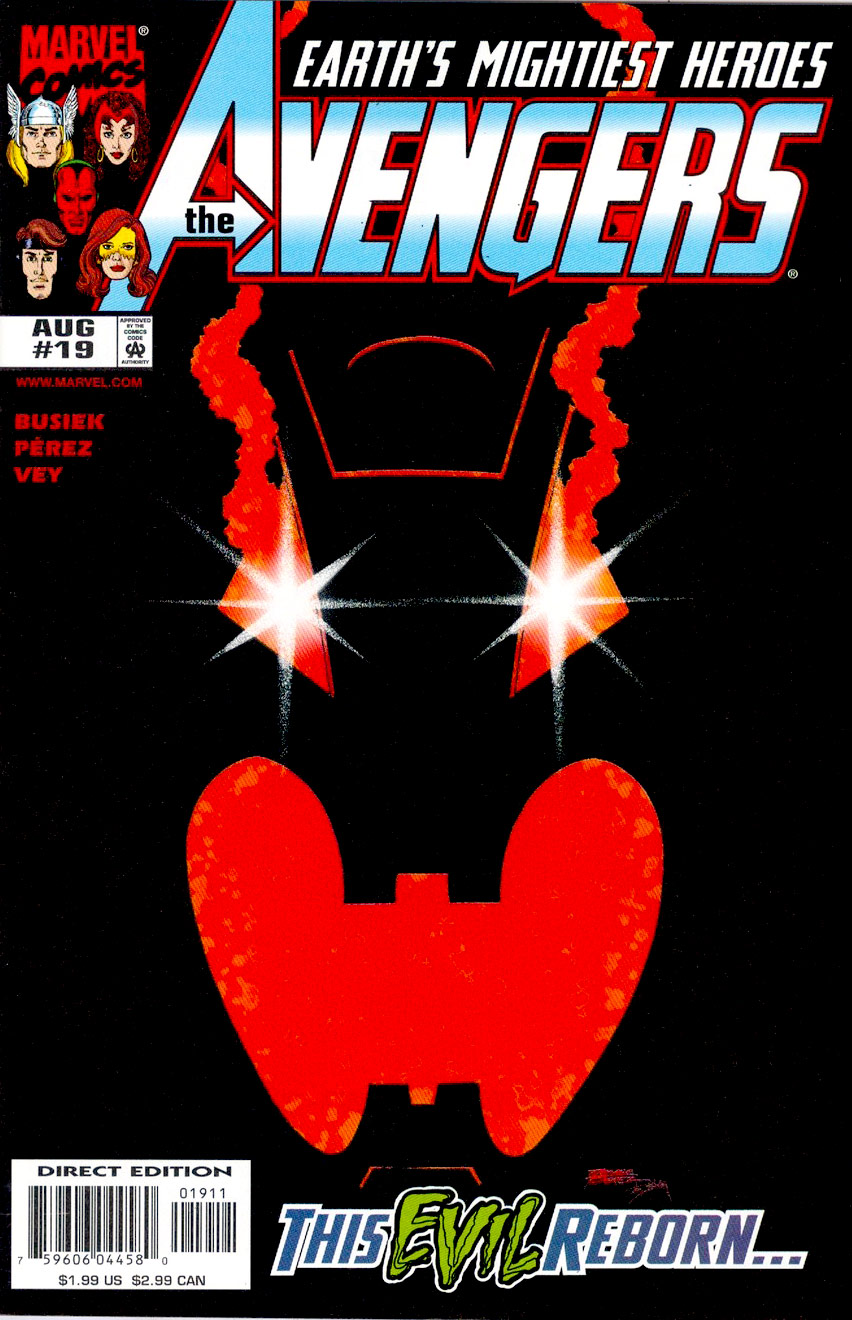 There’s a terrific and surprising battle sequence in issue 19 between the newer Ultron offspring “Alkhema” against the Avengers, who are here made up of the core three of Captain America, Thor & Iron Man (and the MUST be the foundation for great Avengers story—-it’s the law), veteran members Black Panther, Wasp & Vision, and Firestar, who here acts as the first-time-reader’s “eye-level” view of the team. 1999’s Firestar has sure has come a long way from her early 80’s form on “Spider-Man and his Amazing Friends”…though her Perez-designed costume is not really that memorable. Alkhema is basically a better (more evil) version of Jocasta-that is, she’s/it’s a ‘daughter’ of Ultron, but with brain patterns based upon Mockingbird instead of the Wasp. She would actually resemble Mockingbird quite a bit more if she had a giant mole between her eyes (Adrianne, I’m sorry). The battle remains quite even until the tide is turned by a returning Avenger (not spoiling it, but one of mine and obviously Perez’ favorites) whose unique powers are too much for Alkhema.

Issue 20 features an army of resuscitated Ultron bodies—all of the prior existing versions of Ultron, reprogrammed to suit the needs of “the prime” but featuring slightly different personalities based on the stories they were originally featured. Thankfully,the sequence isn’t bogged down with over-explaining just which Ultron is which. It’s an entertaining, if unsettling part of Ultron’s overall plan, and rereading this part of the story is actually now made more compelling due to knowing that A:AOU features countless Ultrons as a unified force.

Ultron’s plan to use his human (and the Vision) ’family’ to repopulate the Earth is chilling. I’ve oversimplified just how he’s planning to go about it, but as issue 21 explains, it all comes back to Hank Pym. In a great bit of supervillain monologuing, Ultron ties years of continuity together (including tying-in some of my least-favorite characters in Wonder Man and the Grim Reaper) to explain his motivations and why these particular characters are being used. Ultron’s logic is so twisted but so well-written that while he’s not a sympathetic character, one can at least see his point. There’s also yet another great call-back from Perez here, as the “family” is trapped similarly to Chthon’s methods in Avengers (1st series) #187 (only they’re right-side up this time). 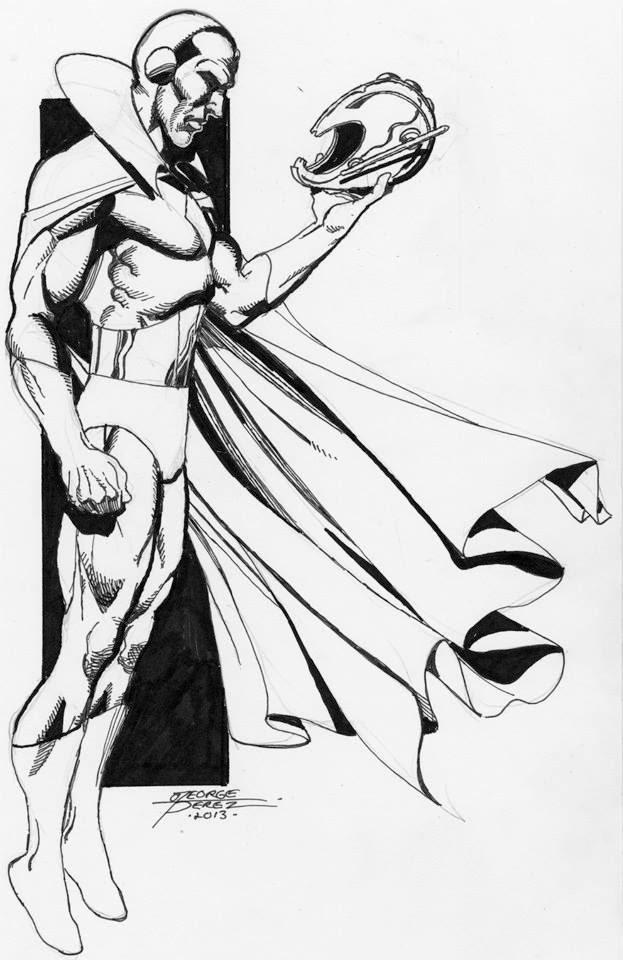 Issue 22 pays everything off beautifully, and miracle of miracles, Busiek writes Hank Pym like a true, worth-rooting-for hero. The way the team of Avengers (led by the core three, natch) fight through Ultron’s machinations to rescue their loved ones from Ultron is just superior action and pulse-pounding excitement. An excellent, emotional sequence features the Vision buying the cavalry some time by appealing to Ultron’s parental instincts (likewise, after A:AOU we’ll never read the Vision the same way again; the interpretation of his character will always be reflected by Paul Bettany’s voice. That’s not a bad thing, it’s just….jarring). There’s also a “face turn” by an unexpected character that does much to redeem a former villain. All of this action builds and builds and leads up to (drum roll please):

Well, it’s one of my favorites actually, and may be tied with Wolverine staring up from the sewers saying “It’s my turn” at the end of Uncanny X-Men #132. You know the one. Why is this panel near the end of issue 22 just so special? Because it’s earned. Everything from the previous three-and-a-half issues leads to this one confrontation….and IT’S BEAUTIFUL. Seriously, this is the moment I remembered most from the Busiek/Perez run, 16 years later. I won’t post it here. You deserve to read it and to feel it.  If you read it and the moment is just “ok” for you, I suggest you go read Percy Jackson or something like that, because THIS is what superhero comics can do.

This is my love letter to one of the greatest Marvel stories I’ve ever read, and perhaps the only Ultron story you’ll ever need to read. I’m sure some of the newer tales by guys like Hickman and Remender are fine, and certainly Bendis used Ultron well, but nothing before or since featuring Ultron can ever top this saga for me. The issues are out there, and there’s a new big pricey omnibus featuring them, but I’d recommend forking over the $10 a month (especially if you have a tablet) and subscribing to Marvel Unlimited. It’s like Netflix for Marvel Comics, and it’s the best value going today. Do I get that check now, Ben?

Ultron, we would have words with thee.