Happy July to you, boys and girls, and welcome to “Weber Has Issues”, a weekly look at new comics or collections that are “new-reader-friendly” (or at least “new-reader-polite”).

I have been looking forward to this week for awhile; thankfully, one of the toughest things about doing this column has already been done for me. DC and Image each put out sparkly-new titles this week…did either of them make the WHI grade? Let’s find out together, shall we neighbor? (Brief interlude as I put on a cardigan and trade my Doc Martens for Keds.) 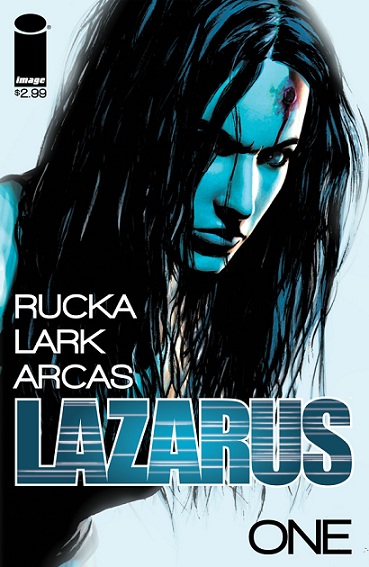 Lazarus #1(Image Comics, $2.99), written by Greg Rucka with art by Michael Lark, immerses you in a near-future of genetically-enhanced intrigue. The reader is given a short text introduction that effectively sets the stage for the story. To paraphrase: There are no more nations, only financially-divided castes which are set aside into only a few “Families”….money is truly the might in this world. If someone is not a member of one of the ruling “Families”, they must become serfs who provide a service for their ruling “Family”, or else they are considered “waste”. Each family has a designated protector who is allocated the best tech and training in the world, and is entitled their “Lazarus”. Our heroine, “Forever”, is the “Lazarus” of the Family Carlyle. I wonder if the text scroll is all that necessary to set the table; I’ve always tried to ignore them in the Star Wars films (though I can’t imagine them ever eschewing that staple of SW). The story starts in earnest, as we see Forever Carlyle (a.k.a. “Eve”) immediately demonstrating why a Lazarus is called a Lazarus. The comic begins with Eve graphically shot and left for dead, but she “resurrects” a la Wolverine. We follow Eve on a mission of revenge upon her shooters, and we see her go into “Bourne mode” right away; she almost instantly murders the “wastes” who’d left her in a puddle of her own blood at the beginning of the issue. We get more backstory on the attack that wounded Eve as she and her doctor try to put the pieces together of how the Carlyles’ security was breached, and more of the tapestry of just how this particular world is different from ours. We soon meet more of the Family Carlyle and see how hardcore their vengeance runs, though it is not yet clear if “Family” as used in Lazarus indicates biological relationships. This is a dark Earth in a dark future, but half the fun is finding out just how the nuts-and-bolts of the hierarchy work. Eve is a super-soldier with a conscience; she’s not comfortable with the swift justice demanded by her Family. Lazarus #1 is a fun, clear read that is both intriguing and intense; the world is well thought out and it’s cool to see the mythology as it’s revealed. After the “to be continued”, Rucka gives a detailed look at the book’s creation and tells us that real world trends were extrapolated to show how an extreme future like this could someday happen. It was….preachy, but it’s his forum to do so, and the series is a logical projection on his part. As a first issue, this is a textbook jump in the pool  comic where the water is just fine. 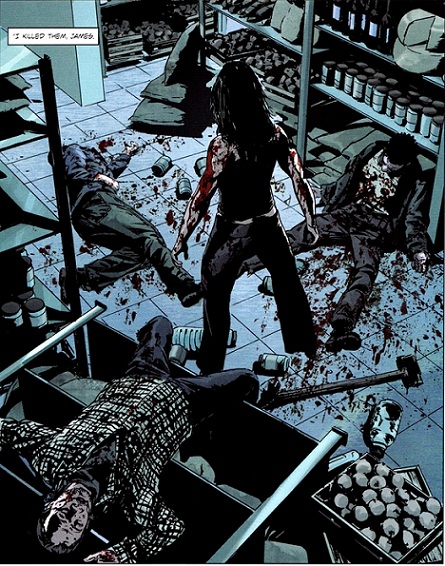 Between Saga, East of West, Fatale and now Lazarus, Image is on tremendous roll of smartly-written, creator-owned debuts. This is exactly the kind of book I enjoy picking up and taking a chance on; I hope that the rest of this finite (Rucka promises several years of tales) series maintains the standard. Rucka’s writing is excellent, as usual. I have his complete runs on Batman and Wonder Woman; this book’s action sequences (as well as Eve herself) remind me of Rucka’s work on the Kate Kane Batwoman. The veteran Lark’s realistic art suits the story very well, and the future literally doesn’t look so bright (and that’s a good thing). I certainly got my money’s worth, and I think you will, too.

WHO WOULD LIKE THIS: fans of the TV shows “Revolution” and “Game of Thrones”; people who enjoyed the movie “Gattaca”; grown-up readers of “The Hunger Games” trilogy; and people who liked “Saga” as well as “The Wake”.

On the other hand, sometimes a comic comes along that I have absolutely no idea what to do with. 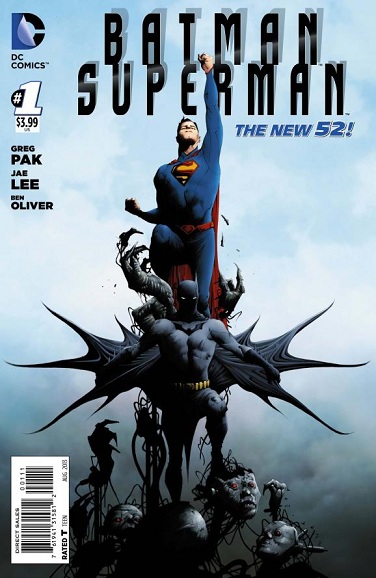 Batman/Superman #1,(DC Comics, $3.99), written by Greg Pak and with art by Jae Lee (1st half) and Ben Oliver (2nd half) is just an absolute mess. I read the current iterations of “Batman” by Scott Snyder and have just started Snyder’s “Superman Unchained”, and this book seems like it occurs in a completely different universe where there is no coherence whatsoever. I can not believe someone was paid to edit this comic book. I read “Batman/Superman #1”three times and I’m still not sure exactly what is happening. The issue starts “years ago” with Clark Kent stopping some pre-teen bullies from beating up two Islamic children, while Bruce Wayne in homeless vet drag watches on. We skip ahead to a title page that gives a brief glimpse of both heroes’ childhoods and then to another “set piece” featuring both Bats & Supes (and the obscure, seldom-seen anti-heroine Catwoman) in Metropolis. All three are working independently on the trail of the killer of several Wayne Enterprises employees. There’s apparently an unnamed malevolent entity who possesses Catwoman and then teleports the World’s Finest (here stated ironically) to Smallville. A different artist takes over for the rest of the issue, but he doesn’t bother drawing backgrounds either. Really DC? You put out a first issue with multiple artists splitting the issue? (not a back-up tale, but on the main narrative). Jae Lee didn’t have enough lead time? You had to get the book out 2 weeks after the movie? Ah, corporate synergy. 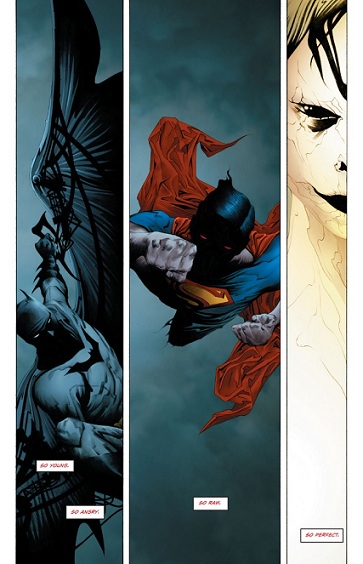 That jarring change certainly doesn’t help readers figure out just what’s going on, not that the sparse script by Pak does any better. I’m actually a fan of Pak’s Hulk and Hercules books from Marvel, but here he only gives us a very small bite of any substance here, and again, it’s just fighting and not much expository dialogue. If I have to go to Wikipedia to find out just what in blazes is going on in the $4 comic book I just bought, I’m going to be angry. Earth 2?  Ain’t nobody got time for that!  The art ranges from gorgeous to frustrating, and the fill in work is so dramatically different to Lee’s style that it feels like a totally different terrible comic. I’m not sticking around to see if it gets better in issue two, but it you want to, go ahead. No judgements here, and there’s something in comic-book land for everybody. I just simply hated this.   The story seemed just so….pretentious.

To be fair to Greg Pak, I will read the trade when it comes out and will gladly apologize if the series makes more sense. In fact, I really hope I get to, I expected so much more that what I received in this comic. These characters, even in their slightly different modern interpretations, deserve much better.

WHO WOULD LIKE THIS: users of psychotropic drugs, fans of Rob Liefeld, watchers of TNA wrestling and community-college philosophy majors.

Other new comics I purchased this week: All-New X-Men 13 (Cooling off just a bit, but still my favorite Marvel title), Aquaman #21 (My favorite hero; again, don’t judge me, I won’t judge you), Deadpool #12 (Still funny, please stay on this book Brian Posehn), Fury Max #13 (Final issue; I’m writing up a series review very soon), Hawkeye #11 (Absolutely great for readers of the series, NOT a jumping on point). Justice League #21, Justice League of America #5, Justice League Dark #21 (All leading into the Trinity War, I can’t wait for the Shazam back-ups to be collected), and the Wake #2 (still awesome. The mystery…..deepens).

To buy Lazarus #1 and Batman/Superman #1, I recommend supporting your local comic book brick-and-mortar store or using Comicology’s nifty comic-reading app. To find a comic shop near you, call 1-888-COMIC BOOK.