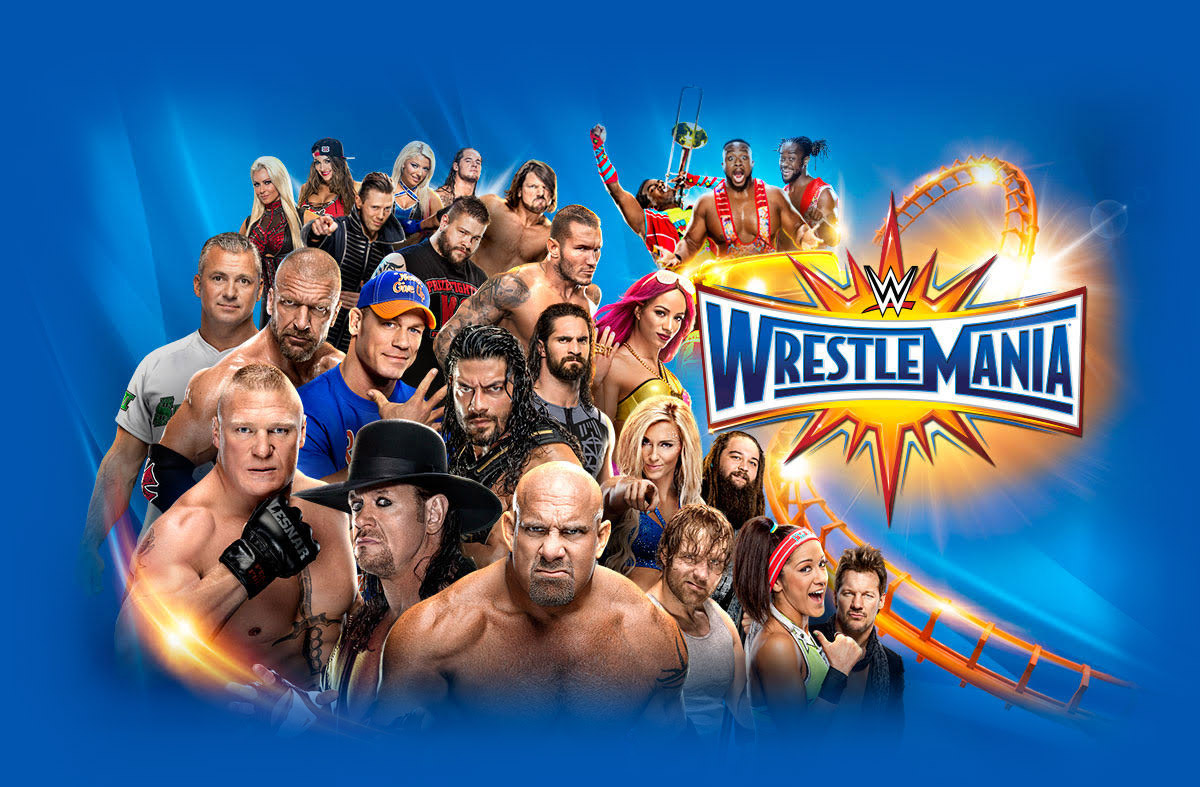 The biggest wrestling weekend of the year is upon us as WrestleMania 33, this year dubbed “The Ultimate Thrill Ride” in honor of its location, descends upon Orlando, Florida’s Camping World Stadium (the former Citrus Bowl.) The show, set to be headlined by Brock Lesnar vs. Goldberg and Roman Reigns vs. The Undertaker, joins a myriad of other WWE events over the course of the week including the Hall of Fame induction ceremony, NXT Takeover: Orlando, Raw, Smackdown Live, and WrestleMania Fan Axxess. This in addition to indy shows, Wrestlecon, meet & greets, and hard ticketed wrestler parties and live shows all over the Orlando area. Even wrestling websites are in on the fun as members of our own Place to Be Nation will be meeting up in Orlando.

The majority of events take place on International Drive, or I-Drive for short, which is the main tourist drag in Orlando. The Orange County Convention Center, home of WWE Axxess and The Wrestlecon hotel, the Hyatt Regency Orlando, are on I-Drive as well as Universal Orlando Resort, Seaworld, The Coca-Cola Orlando Eye, and tons of other hotels and motels, every chain restaurant you’ve ever heard of, and plenty of tourist traps. At the southern end, I-Drive connects with World Center drive, one of the main thoroughfares through the Walt Disney World Resort.

Whether you are staying at the heart of WrestleMania activity on I-Drive or at a Walt Disney World Resort (or somewhere else along I-4 between Disney World and Universal) you will be within a short cab or Uber ride to any tourist destination you desire. Camping World Stadium, where WrestleMania actually takes place, and the Amway Center (home of the Hall of Fame, NXT, Raw, and Smackdown) are located a bit further up I-4 from the tourist zone. The only inconveniently located events are those surrounding Ring of Honor’s Festival of Honor, including Supercard of Honor. They are being held at the Lakeland Center in Lakeland, FL, roughly an hour south of Orlando.

A rough estimate of distances is below:

Also note that, in addition to the times stated on this chart, one hour should be allotted to get from the main entrance of any Walt Disney World theme park and your Walt Disney World resort using the park’s transportation system. You should also allow 30 minutes to leave Disney Springs, 20 minutes to depart the parks of Universal Orlando, and 15 minutes to leave Citywalk. You should plan to arrive at Camping World Stadium before 4pm on Wrestlemania Sunday and plan to arrive at all other events 30 minutes before gate opening to ensure a smooth arrival into the venue by the start time. Camping World Stadium parking lots open at 11:30am for all you tailgaters and there is a clear bag policy in place similar to the NFL and many other big events/sports. Details are on Camping World Stadium’s website.

Traffic on International Drive is notoriously horrible at morning and afternoon rush hour but could be a bottleneck at all hours of the day. Traffic is also known to back up in the area of Disney Springs in the evening, however Disney has made some infrastructure improvements in the last year to cut down on some of the congestion.

Theme park touring is a possibility during the day Sunday before Wrestlemania and on any of the mornings/afternoons, especially Monday and Tuesday if you are staying in town for Raw and Smackdown. Guests with multi-day passes for Disney should consider visiting Disney’s Hollywood Studios or Animal Kingdom as both parks can easily be toured in a half-day. If you will only be visiting one or two parks for half-days (ie. no full day visits) Magic Kingdom and Epcot are probably the better options. Magic Kingdom has the most rides and attractions that can be experienced, making it the best “bang for your buck” option while Epcot, with its emphasis on food and drink as well as rides, is a great choice for a festive “tailgate” atmosphere. Both Universal Orlando parks are located much closer to Wrestlemania events than Walt Disney World, making them also great options for half-day touring before a nighttime show.

Disney Springs (the former Downtown Disney) and Universal CityWalk are also great options for pre-Mania activities as no separate admission is required. Consider a tailgate with bowling, food and adult beverages at Splitsville Lanes at Disney Springs or perhaps keep up with MLB opening day at NBC Sports Grill & Brews at CityWalk. Many nationally known sports bar chains have locations on I-Drive including Buffalo Wild Wings, Hooters, and Dave & Busters.