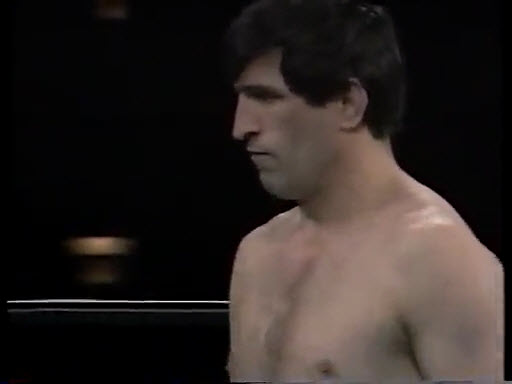 After years of having his name whispered into my ear during (Wrestling Observer) Hall Of Fame season, this year I relented and decided to give Han a chance. I’d watched very little of his career, and in fact think I had only seen a match against Kiyoshi Tamura from around 1997. The knock on Han is the small amount of matches he had and that the style doesn’t really exist anymore. After watching the first two years of his career, I will say that I think it needs to be considered in terms of the length of his career rather than the number of matches. Having monthly matches over almost twelve years really allows for a much higher output than we see from the star-making careers of current UFC fighters. Also, I would say that this style not only morphed from worked shoots into MMA, but has also come back around again with Timothy Thatcher and friends populating the current independent wrestling scene.

Watching Volk Han from the beginning of his career, it is remarkable that not only did he seem to get it right away, it seems like he largely got it more than most people ever will. The ability to work what would seem to be legitimate matches and still bring in psychology at his level is unbelievable. He is like the grouchy version of Johnny Saint, mastering the ring to his will and influencing future generations without realizing it at the time. I am hopeful of reviewing all of the footage I have found for him through 2001 and am starting here with the early days of 1991-1993. I’ll note that the reviews of matches get more detailed as the matches go by as I was becoming more engrossed in the style.

This is Han’s first professional wrestling match. It is really cool to see someone like Maeda be willing to work so evenly with Han. He really takes well to the style here, which is cool since it feels like you are watching a style evolve in front of your eyes. They feel each other out with kicks and punches to start. Han goes for a cross armbreaker and Maeda uses a rope escape. They stand again and throw kicks until Han gets the leg on the mat. Maeda gets a guillotine suplex and goes for a cross armbreaker. Han grabs the leg and Maeda does his second rope escape. Han continues with leg-work and is dominant as the monster invading heel. He has a guillotine on and hits somewhat of a DDT. Maeda does a belly-to-belly suplex. Han gets the ankle and Maeda does a rope escape. Han gets the ankle again and Maeda grabs the rope again. Maeda throws some kicks but Han catches his foot and throws him to the mat. Maeda applies a choke and gets Han’s back. Maeda misses a spin-kick and Han throws some leg-kicks.  Han bullies Maeda around the ring for the finishing stretch until Maeda hits a spin-kick to Han’s head for a down. Han gets to his feet and gives Maeda a back suplex (sort of). They both tie up each other’s legs but Maeda gets the advantage and Han taps out. This is star-making stuff here and should be studied by people with creative control in today’s scene.

I would definitely like to see more of Genaddi but don’t know if there is anything else to see. Han continues to evolve in his working style here, showing the ability to work underneath with a giant. Watching him work a shoot-style babyface comeback is awesome. Genaddi works away at wearing him down through the match while Han keeps going for the submissions. Han takes him down with a knee and a kick and uses his legs to bend Genaddi’s arm behind his back in ways it shouldn’t be bent. The big man submits for the finish.  It really feels more like a seasoned worker experimenting with shoot-style rather than a seasoned shooter experimenting with working.

Outstanding stuff here. The kicks are flying to start and Han unleashes a spinning backfist. Han does a leg-trip and has Maeda’s head cranked. Maeda gets a leg-lock and they jockey for position. The footage jumps and they are standing and throwing kicks. Han gets Maeda to the mat and does some knees to the ribs and keeps going after the legs. Maeda grabs Han’s heel and Han does a rope escape. They are on their feet and Maeda punches Han and knocks him down. Han recovers and catches Maeda’s ankle. They’re up and Maeda knocks Han to the mat with a spinning head-kick. Han recovers and gets Maeda’s ankle again until Maeda grabs the rope. Maeda suplexes Han who transitions into a knee-bar making Maeda tap out. Han is established as the real deal by this match and they are even for a lot of the match until Han cements his leglock and gets the submission. Where has this guy been all my life?

Great chasing here, I am assuming Zara might be Russian as well as he is at least European. He is a lot of fun to watch but it is the Volk Han show.  Zara grabs a fireman’s carry right away and goes after Han’s wrist but the wily Han escapes. Zara goes for kicks but Han slaps away at him. They continue with strikes and Han gets Zara’s back. Zara gets Han’s ankle and takes him to the mat, gets his back and tries for the arm. Han gets to his feet and kicks at a downed Zara. Han hits some leg-kicks and then clinches. Zara gets the single-leg takedown but Han takes his legs and goes for a choke that is stopped by a rope escape. Zara does some punching but Han grabes his head and then flips him over into an armbreaker. Zara gets Han’s back and does a gutwrench suplex followed by an attempt at a half-nelson. Han grabs his ankle but Zara gets out and tries for Han’s arm. They stand and Zara knocks Han down with a kick and a forearm and keeps kicking him to get a down. They slap at each other and trade kicks. Han tries a back suplex but Zara gets his leg. Han flips and takes Zara’s arm on the mat. They stand up and trade strikes and Han gets a down after clobbering Zara with a  spinning backfist. Han then starts kicking Zara and gets another down. Zara does a gutwrench suplex and tries for Han’s leg and gets an ankle-lock while Han replies in kind. Zara gets out and they trade punches and kicks on their feet. Han gets Zara’s head and takes him down. Han gets his back and they roll to the ropes for a break. Zara does a fireman’s carry and goes for Han’s leg. Han gets his back and does a chinlock. They stand and trade strikes again and Han tries for a kimura but they land in the ropes. Han takes Zara’s arm and does a judo-style hip-throw to the mat. Han wins with a major badass leglock combined with a rear choke for the finish. I can’t believe this stuff was happening in the world while I was watching Papa Shango making Ultimate Warrior vomit into the camera.

This is pretty remarkable. It is the longest Han match I have watched yet. Han gave up his first rope-break early, establishing some credibility for his opponent. Han manages to lift him for a hard slam. Han is able to throw two spinning backfists in this match. There is a heavier use of downs in this match and Han does a great job of dramatically getting back up for the count while still seeming credible. There is also a segment in which Han has Kopilov in a leg-lock and they roll all over the ring as Kopilov tries to escape before he gets the rope escape. Han works tons of submissions on Kopilov and seems to be mostly dominant but he gets caught in a toe-hold and taps. This gets a huge reaction with Kopilov doing a big celebration. It occurred to me while watching this match that Han would be thrown into short squash matches if he started today and how awesome it is to see this creative of an approach in a shoot-style environment.

It’s Russian sambo vs Dutch kickboxing here and Han flies at Vrij with a bodyscissors right out of the gate. Vrij throws tons of leg-kicks and plays to the crowd. Han tries to work around the strikes as much as possible and it’s like Inoki vs Ali if it was good. Han is a total babyface here. The finish is phenomenal as Vrij throws a headkick but Han catches him and folds Vrij to the mat and destroys his leg in an ankle-lock.

It feels like guys like Kachiev are coming along aspiring to be like Han which I can’t blame them for. There is some fun mat-wrestling and Han throws out some slaps. Then he does the most badass thing I’ve seen yet as he grabs Kachiev’s head, rolls him over and drives an elbow into his chest and gets a down. Kachiev seems to enjoy picking up Han and spinning him, and who wouldn’t really. Han gives up a lot in the finishing stretch including rope escapes and downs but then twists up Sotei’s arm behind his back like a tormenting uncle and gets the submission win.