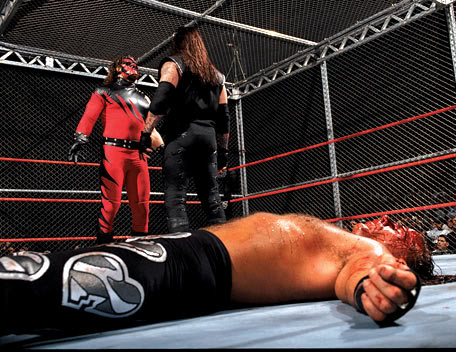 Shawn Michaels defeats Undertaker in a Hell in a Cell match after a Kane Tombstone at 29:54

Fun Fact: Often overlooked with this match is that it was for the #1 contender slot for the WWF World Title, with the title match slated for Survivor Series.

Scott: This was the debut of the new gimmick match. A cell is a steel cage that is higher, wider, and more intimidating. The vision of the cell lowering as Taker’s music hits is magical, and the tension is palpable. The participants: A new, more obnoxious, and very political Shawn Michaels, and the Phenom, who wants to rip HBK’s skeleton from his body, bone by bone. Their brawl at Ground Zero was awesome, but without a clear finish. Here, Taker actually has a large steel weapon with which to destroy Shawn easier. From a backstage, and personality perspective, he is wrestling’s biggest asshole. His in-ring abilities are pretty close to perfect. This is one of the few matches where the face dictated the tempo. Undertaker pretty much kicked HBK’s fucking ass 35 ways to Sunday, using anything imaginable, the steps, the cage, and his fists. You name it; Taker used it to maim the man who cost him the WWF Title at SummerSlam. Shawn also does what has become his patented mid-air blade job. Boy, he gets at A+ for that one, as by the end of the match he is completely crimson, as is the ring. The crowd is eating all of it up, in particular the shot of HBK falling off the wall of the cage onto the Spanish announce table. The climax of this masterpiece: Taker plows Shawn’s head with a chair, and is a Tombstone away from finishing him off. Then….the lights go out. Strange organ music starts, and red pyro and lights come on. Paul Bearer comes out, and with him…in the immortal words of Vince McMahon, in his final PPV as an announcer: “That’s gotta be…That’s gotta be Kane!” Kane, Undertaker’s long lost brother makes his debut. He rips the door to the cell off the hinges, hits the pyro on all four corner posts, and looks Taker dead in the eye. Kane grabs Taker, hits him with his own move, the Tombstone (and honestly, not a very good one), and leaves. We’ll have more on him in our next review. HBK, about half a pint of lost blood away from death, scrapes his limp carcass the few inches, drops his limp bloody hand on Taker’s chest and gets the victory. The crowd was ready to jump from their seats and finish Taker’s job for him. The psychology in this match mirrored the action in the ring. This was the match of the year for 1997, establishes HBK as the escaping pussy heel who will do anything for his body to make a 5-star match, and Taker is set for his next feud, one that would really define him from this point forward. This was an awesome match to end an otherwise sub-par PPV. I overlook the illogical ending, and say this is a classic and is the standard by which future Hell in the Cell matches will be measured. Grade: *****

Justin: Now, don’t let my rating fool you. I love this match and it is definitely one of the greatest gimmick matches of all time. But, I know they wanted Kane to make a major splash and come in and cost Taker the match to ignite their feud, but the way they did it totally ruined the ending and nullified all of the preceding violence. Throughout the whole match, Shawn is beaten to a bloody, useless pulp. He is shoved into the steel, thrown off the cage and smashed with a chair. He was lying, near-death, in a pool of his own blood at the end of the match. Now, Kane comes out, his entrance is a great moment, don’t get me wrong, but he gives Undertaker the worst Tombstone in history which puts Taker out cold, allowing Shawn to barely crawl over and pin him. How is everyone supposed to accept all of the hell Shawn was put through and everything that was done to him over the course of 30 minutes and he was still able to have a very little ounce of energy left to crawl onto Taker, but a measly half-assed Tombstone lays Taker out for a good 5 minutes after he was barely scratched up from the match itself? I know what they were trying to do, but with that lame ending, they totally undid all the reality and hard work they put into the match itself. If only they had Kane wrap a chair around Taker’s head, or had Kane distract him while Helmsley or Rude nailed him from behind, it would have been much more believable. Like I said in the beginning, this is still a top-level match of all time, but you can’t overlook the ending and the effect it had on the reality of the match. This match would change the way feuds were ended, as the words “Hell in a Cell” would come to mean the huge blow off of a major feud and, most of the time, guaranteed violence and great action. Taker and Michaels set the bar quite high in the debut of the match but many in the future will come very close to passing it. Grade: ****1/2