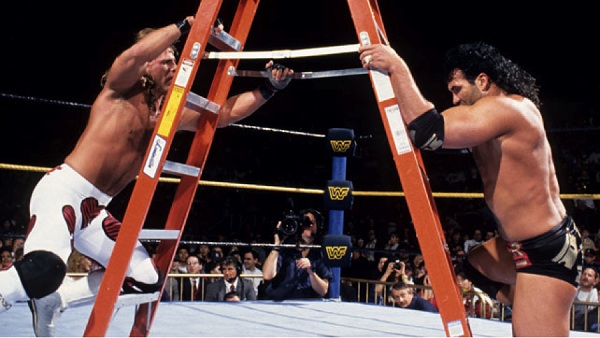 Vintage Vault Reposts are Pay-Per-View recaps with Justin and Scott’s commentary, including star ratings. Please note, these were written in the past and may have dated references.

Razor Ramon defeats Shawn Michaels in a ladder match to retain WWF Intercontinental Title when he climbed the ladder and retrieved the belts at 18:46

Fun Fact: This match was made to unify the real I-C Title (Razor’s) and the fake I-C Title (Michaels’). These two had been engaged in a brutal feud since Michaels returned in November and were on a collision course at this point. The feud also featured the Kid and Diesel in prominent roles and helped those two guys get over as a result as well. Shawn was actually planning on leaving the WWF after this show, as WCW had offered him a fat contract to jump ship (and since Flair was booking at this point and WCW was huge on wrestling at this period, it made sense), so this was supposed to be his swan song. However, shortly after the event, Hogan signed with WCW and HBK decided to stick with Vince rather than go south and play Hogan’s political games again. Shawn was given five months off to heal up and recharge his batteries, and from late-March to July he stayed on TV as Diesel’s manager, even guiding him to an I-C Title win in April. Michaels wrestled his return match against Razor on the August 1st edition of Raw and the rest is history.

Scott: I really don’t know what to say about this match that everyone reading this doesn’t already know. Next to Steamboat/Savage at WM III, this is the greatest Intercontinental Title match in WWF history, and no doubt in the top 10, maybe the top 5 matches of the modern PPV era. You have two men whose potential is ready to explode, put a ladder in the mix, and the chemistry these two gain as Clique members, and you have a grade A off the charts match. There are at least 6 spots in this match where you can actually say “Shit that hurts!!” In fact, at one point, there were 4 straight shots Shawn gives to Razor with the ladder that have to be seen to be believed. There were probably about 14 moments where Shawn was a fingernail away from winning the title, only to have Razor push the ladder aside. Finally, Shawn gets tangled in the ropes and the Bad Guy retains the WWF IC Title. The crowd was on their feet and quite loud for the entire match, and every time either man was within an eyelash of grabbing the belts the other would push the ladder over. This was a match for the ages that made the careers of both men, in particular Michaels, whose attitude and work ethic was in question going into this match. Not anymore. Grade: *****

Justin: What more can you say? This match has it all: athleticism, wrestling, drama, tension, historical meaning and was just flat-out entertaining. If you haven’t seen it, see it and if you have, see it again. This match helped WWF turn the corner and start to reinvent itself. While the rejuvenation of the WWF would not take place until a few years later, this match became the template for the renaissance: two young, athletic risk takers giving it there all and putting on a stellar match in the process. The two used each other to go out on the biggest stage there is, steal the show and make each other stars. Reports say that the two rehearsed parts of this match at various House Shows leading up to the event, meaning they would take one segment and perfect it before practicing the next segment in another city. Anyway, the best compliment I can pay this match is to go see it, now. Grade: *****