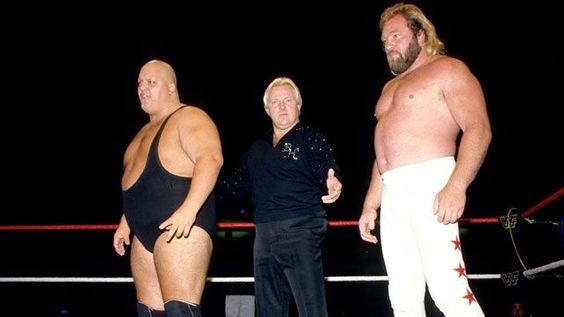 One of the more interesting storylines that has occurred in the world of pro wrestling is when one wrestler is forced to leave the territory, and then a mysterious masked wrestler comes in and they feel very familiar to that departed wrestler. It is usually seen during a heated feud when the heel defeats the face by nefarious means which forces the face to leave, and then the face returns under the mask which frustrates the heel as he knows who is under the mask while the announcers usually make out like they don’t know. It sounds a bit hokey to do though it can be really successful if done properly, and we have already seen it done in Jim Crockett Promotions with Dusty Rhodes as the Midnight Rider and in Mid-South with Junkyard Dog as Stagger Lee. So the WWF decided to use this angle for themselves when Andre the Giant was going to take time away from the company to work in Japan and complete his work in the film “The Princess Bride”. It was also a way to try and introduce a new tag team into the company and to continue Andre’s feud with Bobby Heenan and his Family. While it will be interesting to see this angle used with a guy as recognizable as Andre, it would provide for some fun fodder at the expense of Heenan as he always works well with angles like this.

This angle began on the 4/19 Championship Wrestling when Studd and Bundy challenged Andre to find a partner of his choice to face him the next week with Andre picking Atlas, however when the match took place Andre did not appear and Ted Arcidi took his place with Atlas and Arcidi winning by DQ. Following that match, Heenan demanded that Andre be suspended for no-showing the match and WWF President Jack Tunney obliged, and then in June the announcers began hyping a new tag team from Japan to make their debut known as the Machines and they would be managed by Capt. Lou Albano. Various vignettes aired introducing two men known as Super and Giant Machine as they wanted to come to the WWF for some competition, and after the vignettes Heenan claimed that Giant Machine was Andre under a mask though the announcers claimed that it could be Japanese legend Giant Baba. Heenan complained to Tunney about the situation and Tunney announced that if Giant Machine was revealed to be Andre, he would be suspended permanently. On the 8/2 All-Star Wrestling, Heenan mocked the Machines by having Studd and Bundy come out with paper bags on their heads claiming to be from Korea, and on the 8/16 Championship Wrestling the Machines made their TV debut with Super Machine winning a squash match though during the match Heenan was trying to take pictures of Giant Machine to prove he was Andre. Two weeks later (and 5 days before this show), Albano introduced a third member of the group known as Big Machine as It was announced that the Machines would team with Albano to face Studd, Bundy, and Heenan in a 6-man tag at the Big Event three days after this show. This was a very interesting storyline as it was clear that none of the men under the masks were Japanese and Giant Machine was clearly Andre, but if anything it just showed how awesome Heenan was as a character. It was also weird that they had Big Machine debut on a taped show that would air after this MSG house show and the Big Event, but such was the time period for the WWF.

The Heenan Family were red hot as heels and the Machines get a big pop from the crowd as they know who Giant Machine really is which frustrates Heenan even more, and it is revealed that Big and Super Machine will wrestle the match with Giant Machine on the outside. Super starts off with Studd and they lock up with Studd backing Super into the corner as they exchange shoves, and they lock up again with Super blocking a shot and he pounds on Studd though Studd blocks a slam by grabbing the ropes. They lock up with Super hooking a headlock only for Studd to whip him off and he knocks him down, and they collide again with neither going down and then Super hits a trio of clotheslines that finally knock Studd down. Studd rolls outside to regroup only for Giant to ram him into the apron and he throws him back into the ring, and Big tags in as he attempts a slam on Studd who again grabs the ropes to block it. Bundy tags in and they lock up with Bundy hooking a headlock only for Big to whip him off and neither go down when they collide twice, and then Big ducks a shot and pounds on Bundy only for Bundy to reverse a whip into the corner though he misses the Avalanche. Big hits a back elbow that knocks Bundy down and they lock up as Bundy pounds on Big, and Studd tags in as they ram Big into the corner and Studd pounds on him only for Big to catch him ducking with a kick. Super tags in and fires up on Studd before whipping him into the corner and hitting a back elbow, and he nails Bundy coming in only for Studd to catch him with a back elbow and he stomps on Super. Bundy tags in and drops a knee on Super for a two count before he has Studd hold him from the apron, but Super moves and Bundy nails Studd by mistake as Studd comes in and they argue as Hennan gets on the apron and calms them down. Studd returns to the apron and Bundy locks up with Super as he backs him into Big who holds him from the apron and Super charges at him, but Bundy moves only for Super to avoid hitting Big and he pounds on Bundy only for Studd to knee him in the back from the apron. Bundy stomps on Super and chokes him while Studd holds him from the apron and Bundy pounds on Super before tagging Studd, and they ram Super into the corner as Studd pounds on him and he tags Bundy who continues to pound on Super in the corner. Bundy hits a snapmare and drops a fist on Super for a two count before tagging Studd who drives the elbow into the head of Super and he hits a snapmare, and Bundy tags back in only to miss the elbow as Giant gets on the apron and gets the hot tag. He fires up on Bundy and chokes him in the corner while continuing to pound on him, and he rams the shoulder into Bundy as Studd comes in only for Giant to force him into the corner and he rams the shoulder into both men with Big providing leverage. Studd escapes and holds Giant from behind as Bundy sets up for the Avalanche only for Giant to catch him with a big boot, and the Machines hit a double clothesline on Bundy as Giant squashes Studd in the corner. Giant and Big hit a double clothesline on Studd and Giant goes for the pin only for the ref to see that he is not legally in the match, and he calls for the bell and awards the match to Studd and Bundy on a disqualification. After the match, Giant hits a pair of headbutts on Studd and knocks him down as Studd rolls out of the ring, and the Heenan Family head to the back as the Machines stand tall in the ring. Later in the show, Heenan would return to the ring and says that Albano tried to outsmart him with the three Machines, and he officially challenges the Machines to a 6-man tag against Studd, Bundy, and himself at next month’s show at MSG. Right before the main event, Albano would come out and accept the challenge while also announcing that Big and Super Machine would be joined by a new Machine known as “Hulk” Machine.

The match itself was a decent brawl as both teams did what they could for the 9 minutes that they got and put on a basic tag match. Studd and Bundy have been gelling well as a team over the last year though you could tell that Studd was clearly slowing down, and the Machines did their thing with Big and Super working the match until the end when Giant got involved. It was pretty clear that the company knew that Andre was starting to slow down as well due to his size so he was put into this tag angle, but you knew the heat would still be pretty hot whenever he did get involved with Studd, Bundy, or Heenan. Even though the match ended in a pretty weak DQ, you knew that this feud was going to continue as they made the match for next month by the end of this show, and that they were going to make it big by having Hulk Hogan get involved even though he had his own hot feud going on. The crowd was hot for the match and even hotter when Giant got involved, but they are not happy when Studd and Bundy get the win. Studd and Bundy escape with the win over the Machines by DQ, but this issue is not over yet.