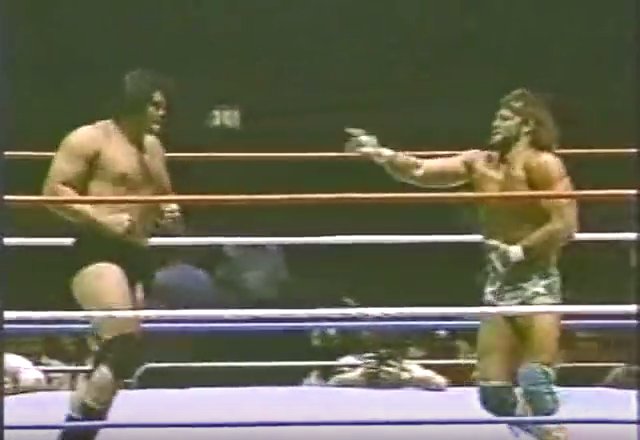 After going through all of these MSG house shows and covering one of the highlight matches of the show, I will go a different route and showcase a type of match that was very prevalent during this time in history. Back in the era of using TV to draw the fans to the house shows, you would mainly only see squash matches on TV to help build up the big stars with the occasional big match though that would typically be saved for either PPV or a special show. However when it came to the house shows, you would see the big stars fight each other or you would see matches such as this one where a big name takes on what is known as a “jobber to the stars”. This type of wrestler was a guy who would defeat jobbers on TV and at house shows to seem like a credible threat, and then they would face the bigger star in a competitive match only to lose in the end. In the case of this match, it was clear who was in which spot as Rivera was a guy who could work a decent match though you knew he was not a guy that was going to be anything special. Savage on the other hand was a guy who when you looked at him, you knew he had star potential and that he was going to be one of the top names in the WWF in due time.

There was obviously no build for a match like this and Savage was still not in a hot feud as he was still building up his cred, and the only angle he still had going was that all the managers were in a bidding war for his services. This was his first appearance at MSG since making his debut in the building back in June and he was continuing to gain steam by picking up a lot of big wins. In an interesting turn, Savage was scheduled to face George Wells at this show as they have had several matches around the circuit with Savage constantly winning, but Wells was sidelined with an eye injury and thus Rivera was subbed in to face Savage.

As mentioned, Savage’s star presence was already on full display as he gets some good heat from the MSG crowd while Rivera barely got a reaction from the crowd, and the crowd was still pretty hot after a few hot matches prior to this one. I like how Gorilla and Hayes put over Savage as a wrestler and they let everyone know he is wrestling’s hottest free agent, even mentioning that he might go outside the WWF to find his manager which is an interesting point to make. Savage stalls in taking his gear off as Rivera is clearly getting frustrated and Savage yells for Wells, and they finally lock up to start with Savage hitting an armdrag and they lock up again with Savage hitting a hiptoss as Gorilla mentions that Savage is undefeated. They lock up with Savage going behind Rivera and Rivera turns it around until Savage grabs the rope to force a break, and Savage spits on Rivera before retreating outside to regroup and he yells at fans before returning to the ring. Savage again steps out of the ring to stall before returning to the ring and they lock up with Savage hooking a full nelson on, and Rivera reaches the corner as Savage gives a clean break. Savage steps out to the apron to stall some more before returning to the ring and they lock up with Savage backing Rivera into the ropes, and he trips Rivera up and hooks a front facelock only for Rivera to escape and he works on the arm. Savage whips him off and Rivera ducks a shot before hitting a high crossbody for a two count, and Savage escapes a slam attempt only for Rivera to block a rollup attempt and he sends Savage to the mat. Rivera hooks a sunset flip for a two count and Savage catches him with a back elbow as we see a quick replay of Rivera blocking the rollup, and Rivera reverses a whip into the corner only for Savage to leap to the middle rope and hit a reverse crossbody for a two count. Both men clock heads and knock each other down with Savage getting to his feet first and he goes up top, but Rivera catches him coming in with a shot and he hits a dropkick that sends Savage to the outside. Savage regroups on the floor before returning to the ring and Savage stalls in the corner before getting a kick in, but Rivera blocks a ram into the buckle and he rams Savage into the buckle. Savage reverses a whip and hits a hooking clothesline on Rivera before dropping a knee on him for a two count, and Savage hooks a submission on Rivera before rolling out of the ring while pulling Rivera to the apron and he drives the elbow into Rivera’s throat twice. Savage returns to the ring and knocks Rivera off the apron to the floor before going outside and hitting a headbutt to the ribs of Rivera, and he pulls Rivera into the ring and puts him in the tree of woe in the corner. He stomps on Rivera repeatedly and then he tosses him to the outside before going up top only to leap onto the apron and stomp Rivera, and he goes up top again and hits the axehandle onto Rivera on the outside. Savage rams Rivera into the guardrail and throws him into the first row before returning to the ring, and Rivera climbs back to ringside as Savage goes up top and hits another axehandle on Rivera. Savage rams Rivera into the steps and rolls back in the ring before pulling Rivera onto the apron, and he pounds on him and rams him into the buckle before hitting a running knee on Rivera. Savage hits a delayed suplex back into the ring for a two count and then he again tosses Rivera to the outside, and Savage goes up top again and hits another axehandle on Rivera before getting in Gorilla’s ear at the table. He pounds on Rivera who tries to battle back and he rams Savage into the apron as he throws him back into the ring, but Savage grabs him first as Rivera reverses a whip only for Savage to avoid the dropkick for a two count. Rivera blocks a suplex attempt with a small package for a two count and Savage stomps on him before choking him on the ropes and snapping him to the mat, and he drops an elbow on Rivera only to miss the knee and Rivera kicks at the leg only for Savage to rake the eyes. Savage rams Rivera into the buckle twice and hits a gutwrench suplex before going up top and hitting the flying elbow, getting the three and winning the match.

The match itself was decent for what it was, as it was in essence an extended squash with Rivera barely getting any offense in and Savage looking like a dominant force. Even though Savage was still in the mindset of constant stalling to start the match which he of course brought over from Memphis, he made every move look big and utilized the ropes very effectively. Rivera did a decent job selling Savage’s offense and making him look good, and he took the flying elbow very well as Savage looked like he landed hard on the move. The one gripe I have which is something I have issue with on most of these house shows is that this match didn’t need to be 16 minutes since about the first 3 or 4 minutes saw Savage stall to get his robe off. There were a few other matches that could’ve used that time, but again this was the way of the times so there is little point in complaining too much about it since it was a good showcase for Savage. One other thing to mention is since Hayes took over on commentary, he and Gorilla have had some really good chemistry as they put Savage over strong though at one point it looked like Gorilla would get in Savage’s face when Savage yelled at him. The crowd was a bit in and out of it for the match though they were firmly against Savage and they are not happy when he gets the win. Savage gets the win over Rivera in a pretty decent extended squash and both men move on.