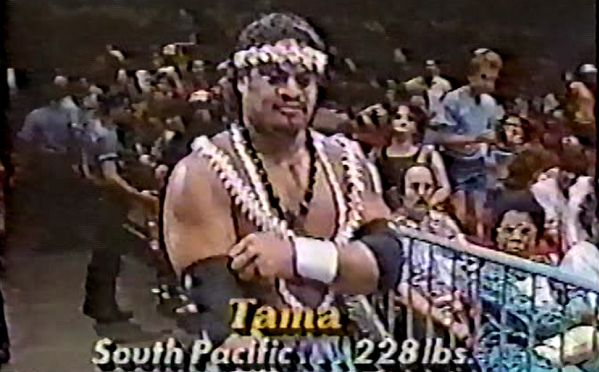 As the summer of 1987 was cruising along, one of the areas of the roster that was starting to get pretty hot was the tag team division which was already miles better than it was a few years ago. With the Hart Foundation reigning on top, this was a good chance for some teams to start gaining some momentum and to potentially be challengers to the champions all the while putting on great matches. We have seen the Islanders continue to grow since they formed almost a year ago and were also getting better since turning heel, and the Can-Am Connection seemed to be on the fast track to becoming the top face team of the division and were in the midst of a pretty good feud with the Islanders. However, a major wrench has been thrown into the mix as Tom Zenk decided to take a walk and left the company while also leaving his partner Rick Martel high and dry by himself. It was a major hit to the division as now Martel was left with no partner and the face side of the division was short a team, but on the other side you have the feud with the Islanders now in limbo as they figured out what to do with Martel. It will be interesting to see if they just let the feud die out without incident or if they will try and salvage it by giving Martel a new partner to continue the feud.

Tama was pretty hot as a heel as he comes out with Haku and Martel gets a good pop from the crowd as he was now flying solo, and an interesting note is that Gorilla and Alfred make no mention of Zenk and pretty much bury him as they put over Martel as a future star. The Islanders waste no time and attack Martel before the match begins only for Martel to duck a double clothesline and he hits one of his own, and he hits a pair of dropkicks at the Islanders roll outside to regroup before Tama returns to the ring. Tama stalls in the corner and argues with the fans before offering a handshake to Martel, but Martel doesn’t bite and Tama gets a shot in before pounding on him in the corner. He whips Martel into the other corner only for Martel to leap over him and he hits a hiptoss on Tama, and then he hits a slam on Tama who rolls outside to regroup with Haku before returning to the ring. They lock up with Tama backing Martel into the ropes and giving a clean break as they lock up again with Tama backing Martel into the corner, and he gets a kick in and stomps on Martel before hitting a slam. Martel avoids the legdrop and uses his knees to stretch out Tama’s legs before hooking a submission on the leg, and he drives his knee into Tama’s knee and continues to work on it only for Tama to kick him away and he hits a monkey flip. Martel kicks Tama to the mat and hits another dropkick before tripping him up and dropping a pair of elbows on the knee, and he continues to work on the knee as Tama kicks at him before shoving him away only for Martel to do a cartwheel to avoid the monkey flip. Martel trips him up and drops another elbow on Tama’s knee while continuing to work on it, and he pounds on Tama while continuing to work the knee only for Tama to escape by pounding on Martel. He gets a shot in only for Martel to hoist him up and hit a kneebreaker as Tama begs off in the corner, and Martel hoists Tama up in the air by his legs and slams him to the mat before going back to work on the leg. Martel uses the ropes to slam down on Tama’s leg and hooks a spinning toehold until Tama shoves him through the ropes to the outside, and Martel gets on the apron as Tama pounds on him before ramming him into the post as Martel falls to the floor.

Tama distracts the ref as Haku stomps on Martel on the outside and Martel rolls back into the ring, and Tama hits a flying back elbow on Martel for a two count and scratches his back before pounding on him. He hooks a submission on Martel who fights to his feet and breaks the hold only for Tama to catch him with a knee to the ribs, and Tama drops an elbow on Martel for a two count before going back to the submission. Martel fights to his feet and again breaks the hold before attempting a sunset flip only for Tama to get a shot in, and he hits a short clothesline on Martel for a two count before going back to the submission. Martel again fights to his feet and breaks the hold before ramming Tama into the buckle, and Tama reverses a whip into the other corner and Martel leaps to the middle rope only to miss the reverse crossbody and Tama gets a two count. Tama stomps on Martel and pounds on him before scratching his back and ramming him into the buckle, and he knocks Martel through the ropes to the outside before ramming him head first into the apron. Tama distracts the ref which allows Haku to ram Martel into the guardrail and Martel gets back on the apron, and Tama hits a suplex back into the ring for a two count and pounds on Martel only for Martel to duck a clothesline and he catches Tama ducking with a running kneelift. Tama recovers first and pounds on Martel before ramming him into the buckle, but then Martel knocks Tama down and tries to fire up only for Tama to rake the eyes and hit a slam. Tama goes up to the middle rope only to miss the diving headbutt and Martel fires up on him before hitting a backdrop, and Tama begs off as Martel pounds on him and hits a back elbow that sends Tama over the top to the floor. Martel goes outside and rams Tama into the apron before returning to the ring as Tama gets on the apron, and Martel slingshots him into the ring and pounds on him as Tama gets tied up in the ropes. Martel gets a shot in and hits a high crossbody on Tama as Haku gets on the apron and frees Tama from the ropes, and Martel ducks a shot before tripping Tama up and slingshotting him into Haku which knocks him to the floor for a two count. The bell starts ringing for some reason as Tama catches Martel ducking with a shot and he goes up top, and he hits a crossbody only for Martel to roll through which gets the three and he wins the match. After the match, the Islanders attack Martel and hit a double diving headbutt before stomping on him, and officials comes out and force the Islanders to the back before assisting Martel.

The match itself was pretty good as both men worked hard for the amount of time they got and put on a solid match. I think this was a good showcase for Martel even though he was left high and dry by Zenk, but he showed he could work as a singles wrestler since he was a former AWA World Champion. This was also a good showcase for Tama as he does a good job in working Martel over while selling the leg after Martel worked on it, and Haku did his thing on the outside trying to help whenever he could. Now on the surface it seems weird that this match got almost 20 minutes, but considering this was supposed to be a tag match I thought that did just enough to fill the space out though they were at times filling time with the rest holds which is fine since they were put in a tight spot. It was also pretty clear that they wanted the feud to continue as Gorilla and Alfred were putting over how Martel was looking for a new partner while also putting Martel over as a great talent. The crowd was pretty hot for the match and they popped big time for Martel when he won, but they are not happy when the Islanders beat him down after the match. Martel gets the win over Tama only for the Islanders to get the last word on this night, which means that this feud is not over yet.