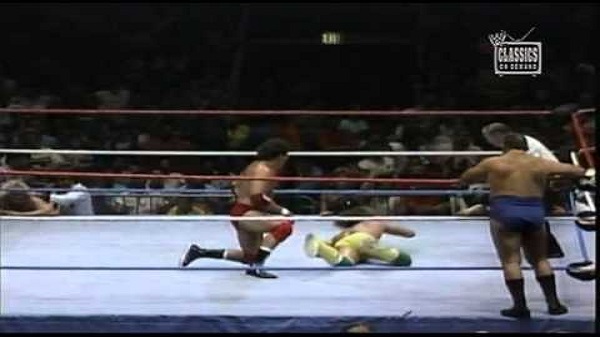 Since the year started, one of the hottest feuds of the year has clearly been the feud between Randy Savage and Tito Santana for the Intercontinental Championship which has pretty much seen Santana chase Savage after Savage won the title back in January. Every match we have seen from them has been a wild affair that has seen Savage either escape with the title or Santana screw himself in the end. But as we head into the summer, it was pretty clear that the feud seemed to be running its course as the company decided to insert Sammartino and Adonis into the feud. Adonis was coming off his poor WM match against Uncle Elmer and was mainly involved in the ongoing Hulk Hogan/Paul Orndorff saga while Sammartino was pretty much nearing the end of his comeback run. It was pretty interesting to see these two men be added to this feud, and it was an interesting dynamic seeing Savage and Adonis team up as well as Santana and Sammartino..

As mentioned, the feud between Savage and Santana has been raging since January and they of course fought at the last two MSG shows with Savage winning the no-DQ match back in April, and then their match in May which saw Sammartino be the guest referee ended in a no contest when Adonis got involved. Since then, Savage and Santana continued their feud on the house show circuit with Savage typically winning while Adonis worked in other matches and Sammartino was pretty much a special attraction for the MSG crowd by this point. Since this would be the first time these four men would be involved in a tag match, it would be interesting to see how the chemistry between them would turn out and given how great Savage/Santana has been, it shouldn’t be too hard.

We get a good interview with Savage and Adonis before the match as they talk with Gorilla Monsoon and put over themselves strong and promise victory over Santana and Sammartino, but I will say that Gorilla was a bit annoying even though that was his thing. Sammartino and Santana get a big pop from the crowd as Sammartino is still beloved even this late into his career while Savage and Adonis were red hot as heels. The two teams waste no time and brawl to start with Santana and Sammartino pounding on Savage and Adonis and Santana knocks Savage to the outside, and Sammartino rams Adonis into the post and whips him inside out in the corner. Santana stomps on him and they knock Adonis to the outside as Savage returns to the ring only for Santana to pound on him, and he throws Savage over the top to the floor and the heels regroup on the outside. Savage throws a chair into the ring which Sammartino grabs and he throws it back at Savage on the outside, and Adonis rolls back in the ring and Santana pounds on him as Sammartino grabs Savage on the apron and rams him into the post. Santana whips Adonis into the corner with Adonis ramming his shoulder into the post as Sammartino stalks Savage on the outside only for Savage to use Elizabeth as a shield, and Santana pounds on Adonis and knocks him to the outside only for Savage to nail him from behind and knock him to the outside. Adonis hits a slam on Santana on the floor as Sammartino stalks Savage and Santana returns to the ring to assist Sammartino, and the heels again regroup on the floor before Savage returns to the ring though he quickly bails back outside to stall. Savage goes up top only for Sammartino to knock him down and he stomps on Savage, and he rams Savage into Adonis which knocks Adonis to the floor and Santana gets a shot in on Savage which leads to Sammartino kicking Savage down for a two count. Sammartino kicks at Savage and tags Santana who knocks Savage down before nailing Adonis on the apron, and he rams Savage’s head into the mat twice before whipping him into the boot of Sammartino. Sammartino rams Savage into the buckle as Santana goes out to the apron and hotshots Savage on the top rope, and he prevents Savage from tagging out as Sammartino tags in and he drives the knee repeatedly into Savage’s back.

Adonis tags in and preens to the crowd only for Sammartino to hit a trio of armdrags on Adonis, and both Santana and Sammartino pound on Adonis as Santana tags in and kicks at Adonis before working on the arm. Adonis whips him off only for Santana to duck a shot and he hits a high crossbody on Adonis for a two count, and Santana knocks Savage to the floor before hooking a headlock on Adonis who escapes the hold with a back suplex on Santana. Savage tags in as does Sammartino and Sammartino pounds on him before kicking him down to the mat, and he continues to pound on Savage and stomps on him until Adonis pulls him out of the ring to regroup. Savage rolls back into the ring and begs off as Sammartino stomps on him and Savage tries to roll out of the ring only for Santana to kick at him, and Santana grabs a chair and nails Savage in the head with it which doesn’t draw the DQ for some reason even though the ref is looking right at it. Sammartino goes for the pin only for Adonis to break the pin up and Santana gets a shot in on Adonis, and Santana tags in and knocks Savage into the corner as Adonis tags in. Adonis gets a kick in and pounds on Santana before hitting a slam and he goes up top only for Santana to get his knees up on the splash attempt, and he pounds on Adonis only for Savage to go up top and hit an axehandle on Santana. Adonis gets a shot in on Santana and hits a slam only to miss the elbow though he quickly tags Savage, but Sammartino gets the hot tag and he fires up on Savage as Adonis knocks Santana to the outside and he goes outside himself only for Santana to ram him into the post. Sammartino knocks Savage to the outside and rams him into the apron before pounding on him as Santana pounds on Adonis, and Sammartino throws Savage back into the ring and pounds on him as Santana goes after Jimmy only for Adonis to nail him from behind. Sammartino goes outside and pounds on Adonis as Savage goes up top and hits an axehandle on Sammartino, and Savage and Adonis roll back into the ring as the ref counts Sammartino out and the team of Savage and Adonis get the win though after the match Sammartino and Santana clear Savage and Adonis from the ring and stand tall.

The match itself was a fun brawl as both teams worked hard for the 10 minutes that they got and put on a good match though it was almost essentially a squash. While it was normal for Savage and Adonis to get their asses kicked since they were great sellers for heels, it was weird that Santana and Sammartino pretty much dominated the entire 10 minutes with Savage and Adonis getting a few shots in here and there. The chemistry between Savage and Santana was pretty much at its highest by this point while Adonis did his usual over-the-top bumping, and Sammartino showed he could still go though it was clear that he was no longer in his prime and was not going to last much longer. You did wish that it went longer than 10 minutes, and these guys could work a long match especially since they were in the middle of the card, but the 10 minutes does work given the frenetic pace they worked and with the countout you knew there was going to be a rematch at our next show. The crowd was red hot for the match and it’s just amazing how over Sammartino still is even at this point in this career, but they are pissed off when Savage and Adonis steal the win. They steal the win over Santana and Sammartino by way of a countout, but it is clear that this issue is not over yet.

What are your thoughts on this match and the show overall? Share your feedback to be read on tonight’s Place to Be Podcast!