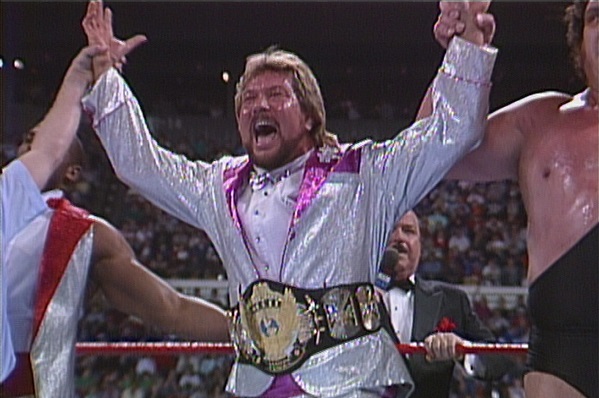 So as we head back into the home office for another night of action, it is easy to say that things couldn’t seem better for the WWF coming off the great success that was the Main Event a mere 17 days ago. The show would end up being watched by 33 million people and scored a whopping 15.2 rating on NBC which would be the highest numbers for any wrestling event on prime time TV. Suffice to say what those people ended up watching was very historic as the over 4-year reign of Hulk Hogan finally came to an end thanks to Andre the Giant, and even more shocking was Andre handing the title over to Ted Dibiase. I had mentioned on the last few previews that I’m sure some people were shocked to see Hogan/Andre take place on that show and not WrestleMania, but obviously it now makes sense why because we have a big build towards WrestleMania. There was no question that Dibiase would be a major factor going into that show, but one guy that seemed to be going through the motions was Bam Bam Bigelow which was weird since at last month’s MSG show he was clearly looked at as being a top guy. This would be an interesting month of build to WrestleMania because with a lot of guys looking to be pushed and a unique concept to be used for WrestleMania, it would be interesting to see how certain guys would be used for that show.

Following our last MSG house show which saw these two men face off in a tag match, they would work the same tag match on the next two TV tapings in dark matches, and then of course was the Main Event on 2/5 when Andre won the title from Hogan and handed it to DiBiase. The next night on 2/6 in a matinee show in Boston and a night show in Philadelphia, they would work the same tag match and a cool note was that DiBiase was billed as champion. Over the next few days in California, DiBiase would defeat Bigelow in singles matches and he was still billed as champion until the 2/13 Superstars when President Jack Tunney officially declared the title vacant. He would announce that the title would be put up in a tournament that would take place at Wrestlemania, and both Dibiase and Bigelow were announced for the tournament as Dibiase would face Jim Duggan and Bigelow would face the One Man Gang. These two would continue to work the house shows throughout February with Dibiase defeating Bigelow in singles matches and Bigelow defeating Dibiase in tag matches involving Hogan and Andre, and it would be interesting to see how both guys would be booked going into WrestleMania.

Bigelow gives a good promo prior to the match and Dibiase was red hot as a heel as Bobby on commentary calls him the World Champion though Gorilla quickly shoots him down, and Bigelow gets a big pop from the crowd as he uses “Stand Back” as his theme which just sounds really bizarre. Dibiase then takes the mike and says that he told everyone he would buy the WWF Title, and if it weren’t for Jack Tunney rewriting the rules he would still be champion, though he does say Hulkamania is dead and he will be the new champion at Wrestlemania. Bigelow wastes no time and rams Dibiase and Virgil’s heads together to start the match and he rams Dibiase into the buckles, and he hits an atomic drop on Dibiase that sends him over the top to the floor and Bigelow does a cartwheel as Dibiase regroups before returning to the ring. The two men lock up with Dibiase raking the eyes and he pounds on Bigelow only for Bigelow to duck a shot and he hits a clothesline on Dibiase, and Bigelow pounds on Dibiase and knocks him down before hitting a headbutt and a back elbow that sends Dibiase to the outside. Dibiase regroups before returning to the ring and they lock up with Dibiase getting a knee in and he pounds on Bigelow, and he rams Bigelow into the buckle and continues to pound on him in the corner as Bigelow tries to battle back. Dibiase rakes the eyes only for Bigelow to reverse a whip into the corner and he knocks Dibiase down, and Dibiase begs off in the corner and Bigelow blocks a kick attempt before hitting an atomic drop on Dibiase. He pounds on Dibiase only for Dibiase to reverse a whip into the corner though Bigelow catches him with a boot to the face, and he pounds on Dibiase and rams him into the buckle before hitting a slam. Virgil trips Bigelow up from the outside and Dibiase rams his head into the mat repeatedly before choking him on the mat repeatedly, and he pounds on Bigelow and hits a clothesline as he goes up to the middle rope and taunts the crowd before hitting an axehandle on Bigelow. He stomps on Bigelow’s face and continues to pound on him before knocking him over the top to the floor, and Dibiase rolls outside and rams Bigelow’s head into the apron twice before returning to the ring. He again taunts the crowd as Bigelow rolls back into the ring and Dibiase rams the knee into the ribs for a two count, and Dibiase hooks a submission on Bigelow who fights to his feet and attempts to break the hold only for Dibiase to yank him back down and maintain control. Bigelow again fights to his feet and attempts to break the hold only for Dibiase to rake the eyes though Bigelow blocks a ram into the buckle and he rams Dibiase into the buckle repeatedly, and Dibiase begs off as Bigelow starts to fire up and he pounds on Dibiase before whipping him into the corner and knocking him down. He knocks Dibiase down two more times and hits a slam before going out to the apron for the slingshot splash, but Virgil grabs his leg and Bigelow grabs at him only for Dibiase to come off the apron with a shot to the back. He rams Bigelow into the post and rolls back into the ring as the ref counts Bigelow out and Dibiase gets the win. After the match, Dibiase gives a great promo about how he was the winner in the end regardless of how he did it, and he called it simply a tune-up for Wrestlemania as he guarantees to be champion at the end of the show.

The match itself was pretty solid as both men worked hard for the 12 minutes that they got and they put on a good match for an MSG house show at this time. It was nice to see these two men in a singles match after having some good chemistry back in January and they had some time to work with though again you could argue that it could’ve been better if that got a few more minutes. Dibiase was getting into a solid groove in the ring by this point while Bigelow looked solid even though he was still nursing a knee injury, and they still had pretty good chemistry here and put on a solid match. I thought Gorilla, Alfred, and Bobby were pretty solid on commentary as Bobby still calls Dibiase champion and puts him over strong despite having his own guys in the tournament. I did find it weird that Bigelow lost by countout as Dibiase could’ve used a big, clean win to push him hard into Wrestlemania and Bigelow seemed to be losing a bit of steam, but since he was also in the tournament he had to be kept somewhat strong. The crowd was pretty hot for the match and were into Bigelow, but they are not happy when Dibiase gets the win. Dibiase steals the win over Bigelow by countout and now has some momentum as both guys look to Atlantic City and the tournament to crown a new champion.