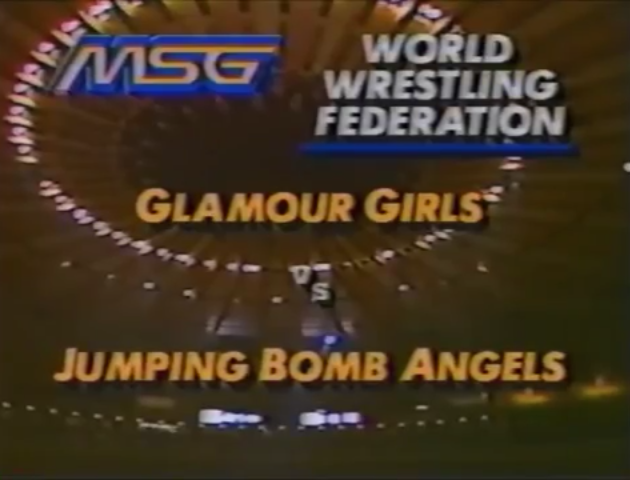 The Glamour Girls (w/ “Mouth of the South” Jimmy Hart) vs. the Jumping Bomb Angels for the WWF Women’s Tag Team Championships

So it was no secret that by this point in 1987 that the Women’s Division in the WWF was not particularly stellar as we had a solid champion in Sherri Martel, but there were no real solid contenders or depth to the roster. The division has been on the backburner ever since Wendi Richter was screwed out of the title back in 1985 and the Fabulous Moolah dominated since, so I’m sure it was a shock to everyone that the company even had a Women’s Tag Team Championship at this point. The titles were first introduced way back in 1984 when the team of Velvet McIntyre and Princess Victoria were crowned the first champions as they were already the NWA Women’s Tag Team Champions, and they were pretty much the only team until Victoria retired due to injury and Desiree Petersen took her place. They would hold the titles until August 1985 when they lost to the team of Judy Martin and Leilani Kai, and after that the titles had in essence disappeared until now when Martin and Kai returned as the Glamour Girls. At the same time, the WWF happened upon a gem of a team from Japan which were the Jumping Bomb Angels, consisting of Noriyo Tateno and Itzuki Yamazaki and they decided to bring them in as their top face team. The skills of this young team and the experience of the Glamour Girls would breathe some life into these titles even though as of now they were the only two teams feuding for the belts, but for now that’s fine as they can establish them as legit belts.

The feud between these two teams began way back on June 25th in Long Island with the Girls retaining the titles over the Angels, and the next night in Pittsburgh would see the same result and the same happened on 6/29 in Montreal. On 6/30, the Angels would defeat the Girls by countout and the Girls would get their wins back the next two nights, and the Angels would again defeat the Girls by countout the next two nights with the Girls getting the wins back after that. The two teams continued to trade wins throughout the month of July and early August before they were taken off the house shows, and the Girls returned to the house shows in October facing a different team and then the Angels fought the Girls again on 11/23 with the Girls getting the win. It was pretty interesting to see this feud start in the summer, cool off during the fall and get ramped right back up heading into the upcoming new PPV so it would be interesting to see how the MSG crowd takes to this since this will be the first time they see this match.

The match itself was pretty good as both teams worked hard and put on a solid title match that you knew was pretty much building towards a big rematch. The Girls had gelled very well as a team and despite looking a bit older and grizzled, they could still go and were a solid veteran team. On the flip side, this was a good showcase for the Angels as they were also a solid team and they were showing things that weren’t always seen from women at the time though it was more common in Japan. You were wondering if these two teams could gel well in a match and if the Girls could keep up with the Angels, but they did a fine job here and I thought 14 minutes was a solid length for the match as they didn’t overstay their welcome though were given good time to work. As I mentioned earlier, it was pretty interesting that Jimmy was brought out to manage the Girls, but I thought it worked since it made the titles seem legit that he would go out of his way to have the Girls in his stable while also adding more gold despite recently losing the men’s tag titles. The crowd was pretty hot for the match and got behind the Angels, but they are clearly not happy when the Girls get the win. The Girls manage to retain the titles over the Angels, but it is clear that this feud is far from over.