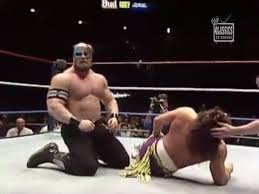 The Rockers vs. the Powers of Pain (w/ Mr. Fuji)

We are now into a brand new decade as we begin 1990 and little did anyone know that the end of the decade would be completely different from how the decade started. But we obviously have a long way to go before we get to 1999 as we head back into the home office for the first big show of 1990. As the 1980s came to an end, the tag division had pretty much hit its apex back in 1988 and while there were still a solid number of teams in the company, it was starting to begin what would be the slow decline to mediocrity. In terms of the tag division, the Rockers and the Powers of Pain seemed to be going in different directions as the Rockers were still trying to break through on the face side though they were still behind Demolition and the Hart Foundation in terms of the pecking order. On the other side, the Powers of Pain were on the clear decline and you had to wonder if they possibly were thinking about splitting them up as they both had some potential as singles stars. It was pretty interesting to see these two teams programmed with each other as the year started, but you knew that the Rockers were going to do their best to have some fun matches with the Powers of Pain.

The Powers of Pain were still pretty hot as heels as the crowd gives them plenty of heat and the Rockers get a big pop from the crowd. Michaels starts off the match with Barbarian and they lock up with Barbarian shoving Michaels to the mat, and they lock up again with Barbarian shoving Michaels into the corner only for Barbarian to miss a charge. They lock up a third time with Michaels hooking a headlock and Barbarian whips him off before knocking him down, and Michaels ducks a shot as Jannetty makes a blind tag and Barbarian catches Michaels on a crossbody attempt. Jannetty goes up top and hits a crossbody on Barbarian for a two count before working on the arm, and he pounds on Barbarian as Michaels tags in before going up top and hitting a blow onto Barbarian’s arm. He continues to work the arm and ducks a shot before nailing Barbarian and he goes back to the arm, and Jannetty tags in and they work on both arms only for Barbarian to whip both men into each other. The Rockers duck a double clothesline and hit stereo superkicks on Barbarian before doing the same to Warlord, and they hit a pair of double clotheslines on the Powers of Pain who roll outside to regroup. Barbarian returns to the ring and tags Warlord as he gets a kick in on Michaels and he pounds on him, and Jannetty makes a blind tag as Michaels ducks a shot and leaps onto Warlord’s shoulders as Jannetty dropkicks him in the back and Michaels hits a hurricanrana on Warlord before pounding on him. Jannetty works on the arm until Warlord gets a shot in and he pounds on Jannetty only for Jannetty to duck a shot, and Michaels makes a blind tag as Jannetty slides under Warlord and Michaels hits a dropkick on Warlord while Jannetty kneels behind him and trips him. Jannetty gets a two count and leaps onto Warlord’s shoulders only for Warlord to counter the hurricanrana with a powerbomb, and he pounds on Jannetty and hits a backdrop for a two count before hitting a flapjack on Jannetty for a two count. Barbarian chokes Jannetty on the ropes from the apron and tags in as he hits a headbutt to Jannetty’s back, and he whips Jannetty hard into the corner and hits a big boot that sends Jannetty over the top to the floor. Barbarian goes outside and holds Jannetty as Fuji hits him in the back with the cane and then Barbarian hoists him up before ramming him into the post, and Warlord throws Jannetty back into the ring and Barbarian hits a clothesline that turns Jannetty inside out for a two count. Warlord tags in and he pounds on Jannetty who tries to battle back only for Warlord to knock him down repeatedly, and Jannetty fires up on Warlord and bites his face only for Warlord to toss him to the mat and Barbarian tags in. Warlord whips Jannetty into Barbarian who hooks a bearhug on as Jannetty fights his way out of the hold, and he goes up to the middle rope and nails a shot on Barbarian before going up to the middle rope again only for Barbarian to catch him in a powerslam. Barbarian goes up to the middle rope only to miss the elbow and Jannetty avoids a charge in the corner as Michaels gets the hot tag, and he hits a slingshot dropkick on Barbarian and pounds on him before continuing to pound on him in the corner. Warlord comes in only for Michaels to hit an axehandle off the middle rope and he pounds on Warlord, and he nails Warlord and attempts a sunset flip as Warlord blocks it only for Jannetty to hit a clothesline and Michaels hooks the sunset flip for a two count. Warlord reverses a whip and catches Michaels on a crossbody attempt only for Jannetty to hit a dropkick that sends Michaels on top of Warlord for a two count, and Michaels avoids an elbow from Barbarian who hits Warlord by mistake and the Rockers pound on the Powers of Pain in the corner. Warlord reverses a whip on Jannetty who gets sent into Barbarian and Michaels ducks a shot, but Fuji trips Michaels up from the outside and Barbarian drops an elbow on him which gets the three and wins the match for his team. After the match, Fuji gets in the ring to celebrate only for Michaels to hit a dropkick that sends him to the outside, and Jannetty goes after both men only for Warlord to pound on him as Barbarian clotheslines Michaels over the top to the floor. Fuji gets in the ring as the Powers of Pain stomp on Jannetty and they drop a series of elbows on him, and Warlord holds Jannetty up as Barbarian goes up top and hits a clothesline on Jannetty. Fuji nails Jannetty twice in the ribs with the cane as Michaels gets in the ring with a chair and he clears the Powers of Pain and Fuji from the ring, and he checks on Jannetty as a stretcher is brought out and Jannetty is helped to the back.

The match itself was pretty good as both teams worked hard for the 10 minutes they got and put on a pretty fun tag match. The Rockers were really getting into a good groove as a team by this point while the Powers of Pain were still pretty solid as a team, and this was the perfect combination with the speed of the Rockers versus the power of the Powers of Pain. It was still interesting to see the Powers of Pain get a bit of a push as a team since they were pretty far down the ladder on the heel side, but it was clear they were still highly thought of if they were given a big spot here. You also wish that this match could’ve gotten a couple more minutes as I think they could’ve put on a great match if given 15 to 17 minutes, but in this case 10 minutes was perfect as they went non-stop and put on a fun sprint. The crowd was red hot for the match and the Rockers, but are not happy when the Powers of Pain win. The Powers of Pain get the win over the Rockers thanks to Fuji, but this issue is not over yet.