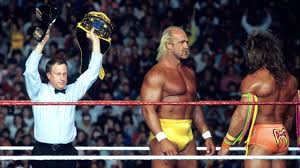 Hulk Hogan vs. the Ultimate Warrior for the WWF Championship and the WWF Intercontinental Championship

We are now at the first Wrestlemania of the 1990s and the sixth one overall, and it has been pretty obvious since the year started as to what the main event of the show was going to be. It has been three years since we had the mega main event of Hulk Hogan and Andre the Giant at Wrestlemania III, and now three years later we have a main event that could possibly match it in terms of importance. For the second half of the 1980s, Hogan has been the most dominant figure in the WWF and he has now been the WWF Champion for one year after winning the title from Randy Savage at WM V. On the other side of the coin, the Ultimate Warrior has been building steam since he crushed the Honkytonk Man back at Summerslam 1988 to win the IC Title, and he has had a hold of that title for the last year aside from a brief run by Rick Rude. Going into the new decade, it was almost a guarantee that Warrior was being seen as the man that would succeed Hogan as the new top guy of the company and there was no other place than Wrestlemania to do so. This was going to be the biggest test ever for Warrior as he was going up against Hogan who was at the top of his game and in a massive building like the Skydome, and this was going to see if Warrior could carry the load as the top guy.

The build for this match started at the Royal Rumble when both men faced each other briefly in the Rumble match until Warrior was eliminated and Hogan would end up winning the match, and on the 1/27 Saturday Night’s Main Event Hogan and Warrior would team up to defeat Mr. Perfect and the Genius. After the match, Warrior was attacked by both men and he would battle back as Hogan stepped in only for Warrior to hit a clothesline on him, and they would nearly come to blows until officials stopped them. Hogan would then challenge Warrior to a match at Wrestlemania and Warrior would accept, and then President Jack Tunney would decree that both titles would be on the line in what was dubbed “The Ultimate Challenge”. On the Main Event III, Hogan and Warrior would retain their titles in separate matches and Warrior was attacked by Dino Bravo and Earthquake, but Hogan would make the save only for Warrior to get in his face again. On the 3/10 Superstars, Hogan would defeat Bravo and was attacked by him and Earthquake until Warrior made the save, and the two would nearly come to blows again only for Warrior to head to the back. This has been a pretty interesting feud and you knew that the fans were highly anticipating it when the two men would finally face off here.

Both men give pretty good promos before the match and both men get a big pop from the crowd as they are pretty split down the middle, and the two men have an intense staredown to start the match as the crowd is ready to explode. They exchange shoves and then they lock up with Warrior shoving Hogan into the corner, and they lock up again with Hogan shoving Warrior into the corner and Warrior challenges him to a test of strength which Hogan accepted. They jockey for position as Warrior brings Hogan to his knees and then Hogan fights to his feet before forcing Warrior to his knees, and Warrior fights to his feet only for Hogan to trip him up and he drops an elbow on him for a one count. The two men collide with neither man going down and they criss-cross with Hogan hitting a slam on Warrior that he no-sells, and they criss-cross again with Warrior hitting a slam on Hogan and then he clotheslines Hogan over the top to the floor with Hogan looking like he injured his knee. Hogan tries to walk on the knee only to collapse to the floor as Warrior goes outside and stomps on Hogan, and Warrior rolls back into the ring as the ref goes outside to check on Hogan and Warrior goes outside as he throws Hogan back into the ring. He kicks at Hogan’s leg repeatedly and Hogan rakes the eyes though Warrior returns the favor and they rake each other’s eyes, and they choke each other as Warrior backs Hogan into the ropes and the ref tries to get between them with Warrior getting a shot in. Hogan pounds on Warrior and he whips him into the corner before splashing him and he continues to pound on him in the corner, and he hits a slam on Warrior and drops a pair of elbows on him for a two count. He hooks a front facelock on Warrior and then he hooks a small package for a two count before hooking another submission on Warrior, and he pounds on Warrior repeatedly and gets a knee in before continuing to pound on him in the corner. Hogan hits a clothesline on Warrior for a two count and then he hits a backbreaker on Warrior for a two count, and he goes back to the submission on Warrior and drives the knee into his back three times before hitting a back suplex for a two count. He goes back to the submission on Warrior who fights to his feet and breaks the hold as both men clothesline each other, and both men manage to get to their feet as Warrior starts to fire up and he no-sells Hogan’s shots. He hits a headbutt on Hogan and pounds on him before hitting a trio of clotheslines and he pounds on him in the corner, and he whips him hard twice into the corners with Hogan collapsing to the mat and he grabs at Warrior’s foot. Warrior hits a snap suplex for a two count and then he hooks a bearhug on Hogan as he grinds down on him, and Hogan fights his way out of the hold and Warrior ducks a shot only for Hogan to avoid a clothesline as Warrior hits the ref by mistake. Warrior goes up top and hits an axehandle on Hogan before going up top again and hitting another axehandle on Hogan, and Warrior bounces off the ropes repeatedly only for Hogan to avoid a tackle as he sends Warrior into the mat though the ref is still out when he goes for the pin. Hogan checks on the ref as Warrior hits a back suplex on him and goes for the pin though the ref is still down, and the ref finally comes to and makes the count though Hogan kicks out before three. Hogan gets a shot in and hooks a rollup as the ref is slow to make the count and Warrior kicks out before three, and Hogan pounds on Warrior and hits a back elbow that sends Warrior over the top to the floor. Hogan goes outside and they trade blows as they attempt to ram each other into the post and Hogan hits a headbutt, and Warrior rams Hogan into the post and both men roll back into the ring as Warrior hits another clothesline on Hogan. Warrior presses Hogan up and slams him to the mat before hitting the big splash for a two count as Hogan starts to hulk up and he no-sells Warrior’s shots, and he pounds on Warrior and hits the big boot only to miss the legdrop as Warrior hits the big splash again which gets the three and we have a new champion. After the match, Warrior celebrates with the IC Title as Hogan goes outside and he grabs the WWF Title before returning to the ring, and he hands Warrior the title and raises his hand in victory as the two men embrace and Warrior raises Hogan’s hand out of respect. Hogan leaves the ring and gets in the cart as he heads to the back and Warrior celebrates in the ring while fireworks go off.

The match itself was amazing as both men worked hard for the time they got and put on a great match that I don’t think anyone expected them to have. It was pretty clear that they had carefully planned this match out down to every detail and it certainly paid off in the end as they had really good chemistry and pulled out one of the best matches in history. Hogan was clearly at his peak in the ring by this point while Warrior was also hitting his peak as well, and as mentioned they had great chemistry and they delivered on the hype that the match had going in. The commentary was top notch as well as Gorilla and Jesse put the match over strong and Jesse at times was leaning towards Hogan which was interesting to hear given his dislike of Hogan, and Gorilla fired off one of his greatest lines after the match when he said that Hogan has taken a giant step to immortality. This really felt like a passing of the torch from Hogan to Warrior and Warrior was clearly now being looked at as the next top guy of the company as he gets probably the biggest win in recent history. The crowd was red hot for the whole match and split down the middle for both men, and they did pop for Warrior when he won though they still show Hogan great respect. Warrior gets the win over Hogan and leaves Wrestlemania as a double champion, and we will see what the future now holds for both men.