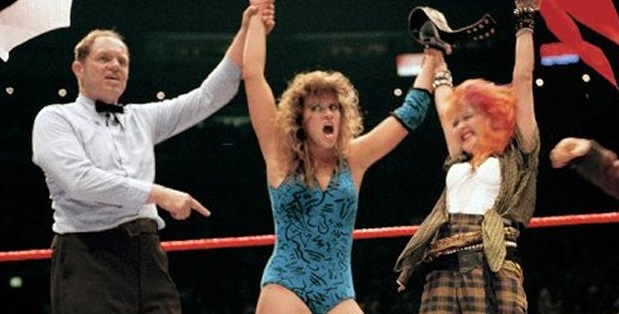 As 1985 started, the WWF was riding high as they were coming off a very successful 1984 thanks to Hulkamania and were gaining more steam with their TV shows on USA and appearing on TBS. Even though the deal with TBS ended up as a failure, it was clear that Vince had big things in his head and was looking to put together a supercard the likes of which had not been seen before. After a very hot show that was the War to Settle the Score a mere month ago, you knew that the events that took place at that show would lead to something even bigger down the line and that takes place here on March 31st. It was a bit weird that they would return to MSG after being in the building only two weeks ago, but there was no question that a show this big had to be in the home office and this was not going to be over run-of-the-mill house show. I don’t think anyone knew what Wrestlemania would end up becoming and it is well known that Vince was banking everything he had on this show, so their future would be defined if this show was a success or a failure.

Heading into this show, there was no question that perhaps the second biggest feud behind the main event was the issue between Leilani Kai and Wendi Richter for the Women’s Championship which was of course an offshoot of the Richter/Fabulous Moolah feud. For those that remember, this issue began just under a year ago between Cyndi Lauper and Capt. Lou Albano which resulted in Richter defeating Moolah at the Brawl to End it All to become Women’s Champion. Even after Lou turned face and allied with Lauper, Moolah continued to feud with Richter and Lauper with Richter continuously turning back her challenges over the year. As 1985 started, Moolah decided to take a young wrestler named Leilani Kai under her wing and use her to finally take out Richter, and at the War to Settle the Score Kai would upset Richter to become Women’s Champion after Moolah attacked Lauper on the outside. It was clear that a rematch between the two was inevitable and it was announced to take place here at Wrestlemania, and the two ladies would build momentum by winning matches on TV and at house shows while cutting promos on each other. While one may argue that the only reason this feud has so much hype behind was because of Lauper, it’s also hard to argue against the fact that this was one of the top feuds in the WWF at the time and was seen as a reason for drawing this many people to the Garden.

Both team gave pretty good pre-match promos and I have to say after watching these last few shows if you didn’t know any better, you would think that Lauper was a valet for wrestling and not a singer as she brought the fire in her promos. After being a buzz for most of the night and especially after seeing Andre the Giant slam Big John Studd to win $15,000 and save his career, they were ready for this match as they shower Kai and Moolah with boos and they were soaking in the heat. But as loud as they were when the heels came out, you almost thought the roof was going to blow off the Garden as Richter came out with Lauper and the crowd is solidly behind them. I thought that Gorilla and Jesse have done a great job in putting over the importance of this match and you could tell that as good as Gene could be on commentary, Jesse was a clear improvement and hopefully they stick with this pairing going forward. Richter and Kai trade insults to start the match and then they lock up with Richter backing Kai into the ropes, but Kai grabs the hair with Richter returning the favor and she blocks a shot before knocking Kai down. Richter takes Kai down with a modified armdrag and works on her arm only for Kai to kick her away, and they lock up with Kai hitting an armdrag and she works on Richter’s arm only for Richter to turn it around and she goes back to the arm. Richter swings Kai around and takes her to the mat while continuing to work the arm, and Kai gets to her feet only for Richter to again take her down to the mat and continues to work the arm. Kai gets to her feet and escapes with a snapmare before snapping Richter over by her hair for a two count, and Kai goes back to Richter’s arm and she yanks Richter to the mat by her hair while continuing to work the arm. Richter gets to her feet only for Kai to again yank her to the mat by her hair and continues to work the arm, and she stomps on Richter’s arm as Richter tries to battle back only for Kai to pound on her. She rams Richter into the buckle and hits a snapmare before pulling back on her hair, and Richter tries to battle back only for Kai to trip her up and choke her only for Richter to counter with a bodyscissors. Kai rolls Richter up and pulls her up by the hair only for Richter to duck a shot and she takes Kai down to the mat for a two count, and Richter again takes Kai to the mat for a two count only for Kai to get a kick in and she snaps Richter over by her hair and pulls at it while taunting Lauper on the outside. She whips Richter into the corner only for Richter to catch her with a pair of boots to the face for a two count, and she backs Kai into the ropes only for Moolah to grab at her from the outside and she tears at her hair until Lauper breaks it up and helps Richter back into the ring. Kai whips Richter into the ropes and hits a big boot as Richter again tries to battle back and she hoists Kai onto her shoulders and slams her to the mat, and then she hits a big splash for a two count and whips Kai into the corner only for Kai to catch her with a pair of knees to the ribs. Kai stomps on Richter for a two count and then she hits a backbreaker for a two count before hitting a slam, and then she goes up top and hits a crossbody only for Richter to roll through which gets the three and we have a new champion. The aftermath is pretty insane as Lauper and Moolah continue to go at it on the apron and Richter tries to get a shot in, but Kai nails her from behind and then Moolah trips getting into the ring in a great funny spot. Richter and Lauper celebrate as the crowd goes crazy and Moolah and Kai retreat to the back.

Overall, this was an interesting situation in that the match itself is pretty basic and is not as good as their match back in February, but this was a case where the crowd and the heat for the match completely carried it. Say what you will about the abilities of both ladies, this was a time where women’s wrestling is not what we know it as today and both ladies had some talent with Kai probably being slightly better than Richter. However as mentioned, Richter was one of the most over stars in the WWF right now and some of that has to be attributed to her association with Lauper. Even though it seemed like the feud did have some legs to go further than this and it was a shame that Kai only got a month reign, considering how big this show was being built it made sense for Richter to regain the title here and run as the face of the division. In a way, this would end up being the peak of the women’s division for this era as Richter would look to have a long reign though a list of challengers may be pretty thin by this point. As mentioned, the crowd was red hot for the whole match and they popped big time for Richter when she won. Richter regains the title from Kai and becomes the first 2-time WWF Women’s Champion, but it would be interesting to see where Richter and the title go from here.