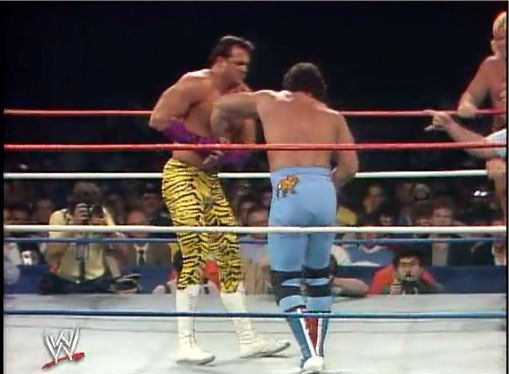 As we head into the month of April, there was by this time very little doubt in anyone’s mind that there would be a second installment of Wrestlemania. Coming off the heels of the success of the very first Wrestlemania back in 1985, the WWF was riding high as they were starting 1986 and they were determined to make this Wrestlemania bigger and better than the previous year. One of the ways that Vince decided that he would make this show bigger than the previous year’s show was to have it take place at three different locations on one night, which on paper seemed like a very daunting task to do. It was not unheard of though as back in November 1985, Jim Crockett Promotions held their big show Starrcade in two separate venues on the same night though they kept them relatively close in Greensboro and Atlanta. Vince had much bigger ideas as he would spread his talent across the country with the show taking place in New York at the Nassau Coliseum, Chicago at the Rosemont Horizon, and Los Angeles at the Sports Arena with four matches taking place at each venue. Each venue would be highlighted with one or two feature matches and would showcase the depth of talent that the company had at the time. While the idea was pretty grand and Vince believed he could get it done, it was perhaps maybe a little too grand as we would never see this again take place for any show, much less Wrestlemania. For the venue of Chicago, they would be highlighted by a giant battle royal featuring the WWF Superstars and several NFL players as well as the WWF Tag Team Title match between the Dream Team and the British Bulldogs, which was the hot tag feud going on at the time.

The match itself was very good as both teams worked hard and put on a solid title match. It was clear that these two teams have built up tremendous chemistry over the last few months of feuding and this was a great way to finally payoff the Bulldogs winning the titles after a great run from the Dream Team. One thing I want to point out is that the ring they used for the Chicago portion of the show seemed to have a lot more bounce in it than the other two, which I thought made some of the moves look even better with the bounce they get. You could also tell that these two teams had no problems being stiff with each other with the highlights being that piledriver that Valentine gives Dynamite which was a nasty one and the nasty spill that Dynamite takes to the floor after he and Valentine clocked heads. I do wonder if Beefcake was hurt because he hardly gets in the match and Valentine does most of the work for the 12 minutes they got, or maybe they thought that Beefcake wasn’t ready for something this big which was strange since he has greatly improved since his debacle with David Sammartino one year ago. One other thing to point out is the fact that Gorilla kept harping on the second ref being involved and yet he doesn’t mention the ref keeping Beefcake from breaking up the final pin and he claimed that Beefcake got tied up on the bottom rope which was a bit bizarre. The crowd was into the match and popped big time for the Bulldogs when they won. The Bulldogs get the win over the Dream Team and are the new tag team champions, and we will see where the feud goes from here as the Dream Team will be due a rematch.