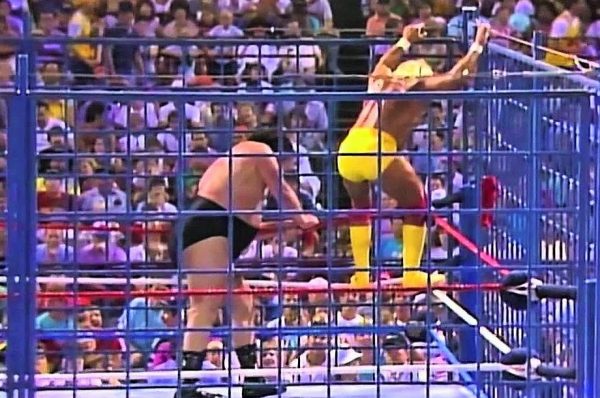 Hulk Hogan vs. Andre the Giant (w/ Bobby “The Brain” Heenan) in a Steel Cage match

So as we come to the end of July and continue on into the summer of 1988, we were about prepared to hit what is been hyped up as a major show which has been dubbed Summerslam set to take place at the end of August in Madison Square Garden. But before we get to that, we have another pretty big show to do and that is the event that was dubbed Wrestlefest, and what made this show even more special was that it was taking place in a baseball stadium. Now doing shows in baseball stadiums was not new to the WWF as they had three big shows at Shea Stadium in New York back in the late 70s and early 80s, and just two years ago they had the Big Event in Toronto which was of course headlined by Hulk Hogan and Paul Orndorff. I always thought it was pretty cool when they decided to do these outdoor shows because it makes it feel special, and doing it in the summer also made sense even though I’m sure it was pretty hot on this day. It did make you wonder why they didn’t do outdoor shows more often and I believe this would be one of their last ones for quite a while, and given how hot the product was throughout the summer it made sense to do a show in a venue like this. It was pretty interesting that they did this show so close to Summerslam as it probably made more sense to do it in June to bridge the gap, but considering that this was the big return of Hulk Hogan it did make sense to have it close to Summerslam and help hype the big main event for that show. I’m sure that many were curious to see how Hogan and Andre would do inside a cage especially since their match at Wrestlemania was not that good and Hogan had been out for several months, but adding the cage I think was a good thing as it would be the definite end to this feud that has been raging for over a year.

Since their last match at Wrestlemania and the fallout of Hogan helping Randy Savage defeat Ted Dibiase to become the undisputed WWF Champion, Hogan would work the next set of tapings before taking time off to film “No Holds Barred” while Andre would feud with Jim Duggan on the house shows and on TV. On the 7/9 Superstars, Savage was doing an interview when he was interrupted by Andre and Bobby Heenan, and they would distract him which allowed Dibiase to attack him from behind. The next week, Savage came out and challenged Dibiase and Andre to a tag match at Summerslam, and on 7/23 the newly-coined Mega Bucks accepted the challenge as it was also announced that Jesse Ventura would be the guest referee. The day before this show, Savage announced that Hogan would be his partner for the match and that Hogan would face Andre here in the cage. It was very interesting that they already announced the tag match as I’m sure many thought this match might take place at Summerslam instead, but this was a fine place to end the single feuds and continue the build towards that tag match.

We see the cage is already erected following the last match and Andre was red hot as a heel as he comes out with Bobby, and Andre’s presence was just amazing as he looked like he was ready to maim Hogan. Hogan gets the big pop from the crowd as they are excited to see him back after being gone for a few months, and the commentary was great at putting this over with Graham making a good point about Andre looking forward to being in the cage. Hogan wastes no time and goes right at Andre to start the match as he chokes him with his shirt, but Andre grabs Hogan’s shoulders and chokes him before hitting a headbutt. He grabs Hogan’s shirt and chokes Hogan with it before pounding on him as he continues to choke Hogan with the shirt, and Hogan tries to battle back as he blocks a ram into the cage and he rakes the eyes. He takes the shirt and chokes Andre with it in the corner before pounding on him and he climbs up and chokes Andre with his boot, and Hogan drives the elbow into Andre’s head three times and continues to pound on him until Andre grabs him in another choke with the shirt. Andre wraps the shirt around Hogan’s neck and ties the shirt to the cage as he pounds on him with stiff chops while laughing, and Bobby calls him over to the door as he unlocks it and opens it up only for Hogan to escape and he keeps Andre from getting out. Andre falls to the mat as Hogan pounds on him and he chokes him with his knee on the ropes, but Andre gets a shot in and he hooks a bearhug on Hogan from his knees only for Hogan to fight out by pounding on him. Hogan tries to climb up the cage only for Andre to nail him first and he knocks him to the mat, and he drops an elbow on Hogan and heads for the door only for Hogan to grab him again and pound on him as Andre takes the padding off the buckle. Hogan continues to tear at Andre’s face and chokes him on the rope until Andre pounds on him, and Andre rams Hogan into the exposed buckle twice and pounds on him as Hogan is busted open. The crowd tries to rally Hogan as Andre hits a headbutt and he bites Hogan on the open wound on his head, and Andre hits another headbutt on Hogan and he rams him into the cage before hitting another headbutt. Andre tries to go out the door again only for Hogan to grab his leg and Andre pounds on him, but Hogan avoids a big boot and hits a clothesline which staggers Andre and Hogan pounds on him before hitting a second clothesline that finally knocks Andre down. Hogan hits the legdrop on Andre and starts to climb up the cage as Bobby comes in and nails Hogan from behind, and Hogan knocks Bobby down as Andre starts climbing up the cage in an awesome and amazing visual. Hogan picks up a pair of brass knuckles that Bobby dropped and he nails Andre twice with them as Andre falls down the cage and gets tied up in the ropes, and Hogan grabs Bobby and throws him into the cage before climbing up and over as he drops to the floor and wins the match.

The match itself was a lot of fun as both men worked hard for the 10 minutes they got and put on a very good cage match. Obviously this doesn’t match up to the atmosphere of their Wrestlemania III match nor the historical importance of the Main Event, and after their Wrestlemania IV match went off like it did there was probably some thought as to how this match would go. To both men’s credit, they went out there and put on a good fight that was nicely paced at 10 minutes and they beat the crap out of each other while using the cage just enough to make it worthwhile. Hogan looked really solid in his first match back since his layoff and Andre looked very impressive here as his presence was still at its highest even after having back surgery. Everything just came together on this night for these two to put on a good match and the visual of Andre climbing up the cage was something to behold, and it was fine to have Hogan win since it puts more heat on the Summerslam match. The crowd was red hot for the whole match and popped big for Hogan when he won. Hogan gets the win over Andre inside the cage, but this issue isn’t quite over yet as they now look to their final showdown in one month at the Garden.