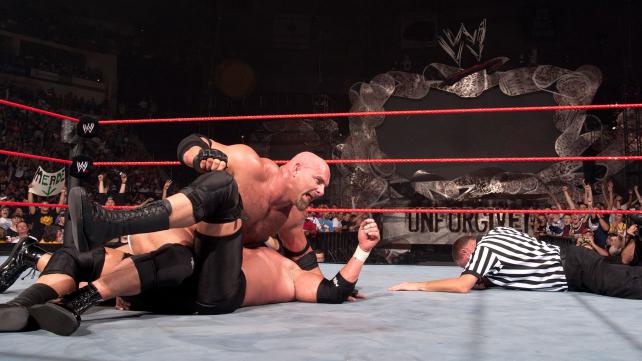 This is the singles match we had to wait for. The build upped the odds from the Elimination Chamber match with a title vs. career stipulation inserted for Goldberg. Also, HHH can lose the title from DQ and count out. Before the match we get JR and Lawler in a somber tone talking about how this will be the last match they call because they just lost the previous tag match to Coach and Al Snow and are being replaced as the Raw announce crew. HHH comes out again first which has been a weird trend for this title reign. He is standing firm on wearing the longer trunks. HHH is still looking a little chubby and Goldberg gets a nice reaction coming out but it is nothing like the electric Phoenix crowd that was rabid for him at SummerSlam.

Early going sees HHH get the initial advantage and pound away before Goldberg powerslams him. JR talks about how HHH was 4-0 at Unforgiven making this, in some respects, his PPV. After regrouping on the outside, HHH again gains a momentary advantage and starts working over the arm. A strike exchange shifts the tide into Goldberg’s favor again. HHH slams Goldberg’s neck on the rope and throws him to the outside but Goldberg no-sells that and comes back with a clothesline. Goldberg charges in for a spear and meets HHH’s high knee.

Perhaps Goldberg should shy away from the spear against HHH given his results the last two times. HHH clotheslines Goldberg on the outside and follows him to the floor. Goldberg gets posted. HHH pounds away on Goldberg, but there isn’t a lot of purpose or sense of peril for Goldberg given the stipulation. As a result, the crowd heat is practically nonexistent. HHH gains a little more focus and goes after the leg of Goldberg. Figure Four is locked on but not one person buys it as the finish and neither man does an admirable job of either applying or escaping the hold.

HHH goes for some grounding knees which Goldberg catches and the comeback is on. Tilt-a-whirl powerslam gets a nearfall. HHH takes his big bump into the corner and out to the floor. HHH is sent into the steps and here is a shock for a HHH 2003 title defense: he is busted open. Goldberg hiptosses HHH back in the ring and HHH is begging off. Low blow and DDT give HHH an opening. I really don’t know if I have heard a deader crowd for a main event. This is putrid. HHH looks for the Pedigree and Goldberg backdrops him over. Conveniently, the sledgehammer is there and HHH clocks Goldberg knocking him out. Goldberg shrugs that off and spears HHH when he gets back in. Finally the crowd stirs a bit. Jackhammer is hit and we have a new champion one month too late.

There was really nothing to this match. It was an uninspired effort that didn’t really try to tell much of a story. HHH’s reign ends and they try to build it up as some epic conquering of an elite title reign as a build for Goldberg to be the guy but it feels completely hollow. Goldberg is a champion but this remains a lesson in not pulling the trigger as the crowd reaction for even the title win was tepid at best. Another disappointing match in what is becoming a huge list of them. I am getting discouraged reviewing these HHH matches.