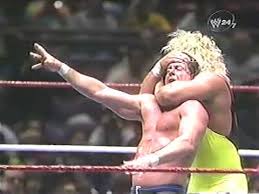 We have finally come to the last MSG house show of 1990 and it has been a very interesting year to say the least. When the year started, the Ultimate Warrior was the IC Champion and all signs were pointing to him and Hulk Hogan at Wrestlemania, and 12 months later Warrior was floundering as WWF Champion while Mr. Perfect was once again the IC Champion. After a brief run with the Texas Tornado as champion, the belt was back to Perfect as he looked to establish himself as a top champion for 1991. On the flip side, Roddy Piper began the year feuding with Bad News Brown and by now was mainly doing commentary for the TV shows, and he would appear at house shows mainly as a guest referee as it seemed like he was ready to move on from being an active competitor. However, he dons the tights once again here to face Perfect in a match that had come out of what happened the previous month when Piper was the ref for the match between Perfect and Tornado.

Since the last house show at MSG, Perfect and Tornado continued their feud with Piper serving as the referee for those matches, and on the 12/15 Superstars (taped 11/19) Perfect would finally defeat Tornado to regain the IC Title with some assistance from the guest ring announcer Ted Dibiase. Beginning on 12/15 in real time, Piper began challenging Perfect for the title in matches which typically ended in countouts or DQs as we come to this show. It is a bit sad that Tornado was quickly pushed aside after losing the title and they moved Perfect away from him, but it was clear that they had bigger plans for Perfect and Tornado was not going to be a main factor anymore.

Perfect was red hot as a heel while Piper gets a big pop from the crowd, and it was interesting that this got the main event spot and not the big tag match from earlier in the night. The two men have a staredown to start the match and Piper spits on Perfect before blocking a shot and he pounds on Perfect, and Perfect regroups in the corner as they lock up with Perfect going behind Piper and Piper hits a back elbow. They lock up again with Perfect backing Piper into the corner and they trade blows with Piper taking control, and he sends Perfect over the top to the apron and then he pulls him back into the ring by his hair before dragging him around the ring. He slaps Perfect in the head and jerks him around before tossing him to the mat by his hair and he stomps on him in the corner, and he continues to slap Perfect in the head and taunts him as he blocks a low blow attempt and he chokes Perfect before tossing him over the top to the floor. Piper comes off the apron with an elbow to Perfect and he pounds on him before ramming him into the guardrail, and he grabs a chair and hits Perfect in the head with it as they head up the aisle and Piper tears at his singlet. He throws Perfect back into the ring and then he tosses him to the mat before continuing to tear at the singlet, and he knocks Perfect down and pokes him in the eyes as he continues to taunt him and he avoids several shots before knocking Perfect down for a two count. Perfect begs off and he ducks a shot as both men clothesline each other and Perfect recovers first, and he takes the padding off the buckle and he rams Piper into the exposed buckle for a two count. Perfect kicks at Piper twice and then he hits a standing dropkick that sends Piper to the outside, and Perfect goes outside and pounds on Piper who tries to battle back and he rams Piper into the guardrail. He pounds on Piper and grabs the chair as he jabs it into Piper’s throat and he rolls back into the ring, and he goes up top only for the ref to force him back down and he pulls Piper onto the apron as he pounds on him. Piper falls back into the ring and Perfect continues to pound on him before hooking a sleeper on, and he takes Piper to the mat as he continues to grind down on him and he uses the ropes for leverage. Piper fights to his feet and escapes the hold with a jawbreaker as both men trade blows until Perfect attempts a suplex and Piper falls on top of him for a two count, and Perfect hooks a small package for a two count before hitting a kneelift which Piper no-sells and he hits one of his own on Perfect for a two count. Perfect hits a clothesline on Piper and then he hits the Perfect-Plex for a two count as he argues with the ref, and Piper hooks a rollup for a two count and they trade blows until Perfect backdrops Piper over the top to the floor. Perfect goes outside and rams Piper into the guardrail before throwing him back into the ring as he goes up top, but Piper shakes the ropes and Perfect gets crotched on the top rope as he falls to the floor and is counted out meaning Piper wins the match though Perfect retains the title. After the match, Perfect grabs the title and gets in the ring before charging at Piper who hits a backdrop and both men dive for the belt, and they struggle for the belt until Piper gets a kick in and Perfect avoids a shot from the belt. Perfect rolls outside and trips Piper up as he pulls him outside and Piper reverses a whip as he sends Perfect into the post, and both men roll back into the ring as Piper grabs the belt and hits Perfect in the head with it. Piper stands over top of Perfect and drops the belt on him before heading to the back.

The match itself was pretty good as both men worked hard and put on a solid title match. Considering he wasn’t wrestling as much as he was in the 1980s, Piper showed that he could still go in the ring as he stands toe-to-toe here with Perfect who was hitting his stride by this point. This was a good house show feud for Perfect to keep his reign going and to give Piper something big even though you knew he wasn’t going to win the title, but even though it wasn’t likely to happen Piper was still a big enough name that you could see him winning especially after Tornado won the title at Summerslam. Again, it was a bit weird that this match was the main event and not the tag match earlier with Hogan, but I guess they did that so they could talk about it for the rest of the night and in honesty, Hogan has become a fixture of the mid-show main event so it was good seeing other matches or feuds main event in MSG. The crowd was hot for the match and Piper, and they pop for him when he won though they are not happy that he didn’t win the title. Piper gets the win by countout and Perfect escapes with the title, and both men move on as we head towards the new year of 1991.