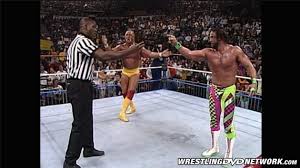 So as we continue down the Road to Wrestlemania VI, this was perhaps the one year where we almost didn’t need to have a Main Event. Unlike the last two years where the Main Event was crucial in setting up the main event of the big show, this year’s main event was already set as we knew that Hogan would face the Ultimate Warrior and that both the WWF Championship and Intercontinental Championship would be on the line. It was almost like they felt that they had to do a Main Event here and add some intrigue by having both men defend their titles as Warrior would defend the IC Title against Dino Bravo, and Hogan would face off with his old rival Randy Savage. However, there was a major hook for this show that was going to make it feel special when it was announced that boxing heavyweight champion “Iron” Mike Tyson would be the special guest referee. Tyson was at his peak in his boxing career and he was set for a major showdown with Evander Holyfield at the end of the year, but first he had what looked like a random title defense against James “Buster” Douglas prior to this show. But in what ended up being one of the biggest upsets in sports history, Douglas would knock out Tyson and become the new world heavyweight champion which would lead to Tyson being pulled from this show and Douglas would take his spot. While some of the heat for the match was now gone with Tyson being out and Douglas being hastily put in, you knew that Hogan and Savage would be able to work around it like pros and put on a pretty good match.

On 1/25, the WWF would hold a special press conference announcing the match between Hogan and Savage while also announcing that Tyson would be the guest referee, but as mentioned on 2/11 Douglas would defeat Tyson to become world champion. Despite this, the WWF ran two pre-taped promos featuring Tyson hyping the Main Event before it was announced that Tyson was out and Douglas was put in. Again, this did hurt the heat a bit as Tyson was at his peak and they had to rush to get Douglas win, but you figured they would make it work somehow.

We get some good promos from Hogan and Savage before the match and a sly dig by Savage by saying that he learned Tyson’s great-grandmother was a Hogan fan, so he had WWF management take him out because he wouldn’t be unbiased as he warns Douglas to be unbiased. We then hear from Douglas as he vows to call it down the middle and I thought he held his own, and Savage was red hot as a heel while Hogan gets the big pop from the crowd and Douglas gets a decent pop as well as he takes his place as the outside official. The two men lock up to start with Hogan shoving Savage to the mat and Savage rolls outside to regroup, and he returns to the ring as they lock up again with Savage hooking a headlock and Hogan whips him off before knocking him down. Savage rolls outside again to regroup as Douglas prevents Hogan from coming out after him and Savage returns to the ring, and they lock up with Savage getting a knee in and he pounds on Hogan before leaping over the top rope as he hotshots Hogan on the top rope. Savage returns to the ring and hits a high knee to the back which sends Hogan to the outside, and Savage goes up top only for Douglas to step in the way as Hogan rolls back into the ring and Sherri gets on the apron. Hogan grabs as Sherri and Savage charges at him only for Hogan to move and Savage hits a high knee on Sherri by mistake, and Hogan pounds on Savage and hits a clothesline before ramming him into the buckle and he pounds on Savage in the corner. He whips Savage into the other corner and splashes him before continuing to pound on him, and then Hogan hits a high elbow and a slam on Savage before dropping a pair of elbows on him and he pounds on him on the mat. He hits an atomic drop on Savage and continues to pound on him only for Sherri to trip him up from the outside, and Hogan grabs at Sherri by the hair only for Savage to slam down on his back and he whips Hogan hard into the corner. He stomps on Hogan and drops an elbow on him before hitting a hooking clothesline for a two count, and he drops a knee on Hogan and chokes him on the mat before continuing to choke him with his boot. Sherri chokes Hogan from the outside as Douglas forces her back and then he ejects her from ringside, and Savage goes up to the middle rope and hits an axehandle on Hogan as Douglas chases Sherri to the back and we go to commercial. As we come back from the break, Douglas runs back down to ringside as Savage hooks a submission on Hogan who fights to his feet and breaks the hold before knocking Savage down. Hogan ducks a shot only for Savage to hit a hooking clothesline for a two count and he tosses Hogan to the outside, and Savage goes up top and hits an axehandle on Hogan on the outside before throwing him back into the ring. Savage goes up top again and hits another axehandle on Hogan for a two count as he chokes him on the top rope, and he snaps Hogan to the mat for a two count and then he drops a knee on Hogan for a two count. Savage kicks at Hogan and pounds on him which knocks Hogan through the ropes to the outside, and Savage goes up top again only for Douglas to again block his way as Hogan rolls back into the ring and Savage drops down to the floor. Savage drapes Hogan on the apron and drives the elbow into the throat before returning to the ring, and he hits a slam on Hogan before going up top again and hitting the flying elbow for a two count. Hogan starts to hulk up as he no-sells Savage’s shots and he fires up on Savage before hitting a big boot that sends Savage to the outside, and he trips Hogan up and pulls him outside only for Hogan to pound on him until Savage rakes the eyes. He rolls back into the ring as Hogan no-sells it and he gets on the apron as he nails Savage who falls back into the ref, and then Hogan hits the legdrop on Savage as Douglas gets in the ring and counts the three as Hogan retains the title though it looked like Savage kicked out before the three. After the match, Savage argues with the ref and then he argues with Douglas about the count before getting in his face, and Savage slaps Douglas in the face and taunts him as he dances around the ring. Savage turns his back to Douglas as he argues with Hogan and then he turns back to Douglas, but then Hogan shoves Savage into Douglas who nails two right hands which knocks Savage down and Hogan celebrates with Douglas.

The match itself was pretty good as both men worked hard and put on a solid title match even though there was pretty much no question that Hogan was going to retain the title. It was pretty weird seeing Savage get the title shot as his feud with Hogan ended definitively back in December, but you could argue that since Savage never got his title rematch from WM V on TV so that is covered here. One could also argue that Mr. Perfect probably should’ve been put in here to blow off the feud with Hogan once and for all, but I guess they still didn’t want Perfect to lose yet so Savage was put in to take the fall. Fortunately, the two still had pretty good chemistry and could put on a solid match which they do here for the 12 minutes that they got. I thought Douglas worked his role pretty well and it was funny after building Tyson up over the last few weeks, they now had to pump Douglas up while also in essence burying Tyson which is funny considered what would happen 8 years later. As I mentioned, the ending was never in question as you knew Savage wasn’t winning the title here and it was more about seeing Douglas knock him out in the end. The crowd was into the match and popped for Hogan when he won. Hogan retains the title over Savage and both men move on.