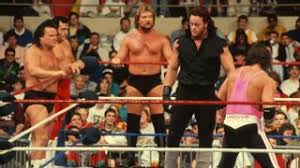 The Dream Team vs. the Million Dollar Team (w/ Virgil, “Mouth of the South” Jimmy Hart, and Brother Love)

We now come to the final PPV of 1990 and needless to say, it has been quite an interesting year that has seen a lot of turnover within the company in terms of the roster. When the year started, many of the guys that were being pushed heavy at the end of 1989 hit their peak by Wrestlemania and now we were starting to see some guys de-pushed while others started getting rejuvenated. When 1990 started, Dusty Rhodes and Ted Dibiase were on opposite ends as Rhodes was having a hot feud with Randy Savage and Dibiase was winding up his feud with Jake Roberts, and now as they start feuding Dibiase seemed on his way back up while Rhodes was sliding down the card. This was one of the big feuds going into this show especially when it was announced they would each captain a team, and knowing that a few of these guys might be wrestling twice tonight was going to add some intrigue as to who would be the sole survivor.

The feud between Rhodes and Dibiase began over the summer when Rhodes’ valet Sapphire began receiving lavish gifts from a mysterious benefactor, and at Summerslam Dibiase revealed himself as the benefactor as Sapphire turned heel and joined him. At the last Saturday Night’s Main Event, Rhodes’ son Dustin was in the front row during his rematch with Savage though Dibiase and Virgil would buy out the seats next to him, and they would attack Dustin during the match which led Rhodes getting counted out as he protected his son. On the 11/3 Superstars, Dustin faced Dibiase in a match where he only had to last 10 minutes against him which he did, and Rhodes and Dibiase would face each other on the house shows including the last MSG house show in October. At the same time, the Hart Foundation and Rhythm and Blues feuded throughout the fall for the titles including at that same MSG house show, and on the Survivor Series Showdown Bret would defeat Honkytonk Man to build momentum for his team. Going into this match, there was also plenty of question as to who the mystery partner was going to be and if that person was going to be the difference maker for the team.

The match itself was pretty good as both teams worked hard and put on a solid Survivor match. The Dream Team were an interesting group because it seemed like the guy that got the most shine was Bret as Ware went down quickly, and then even Neidhart went out fairly quickly and Rhodes got some decent shine though he didn’t even make it to the end. It was a bit weird that they had been doing the thing with Dustin yet he was nowhere to be found, and it would’ve made sense for him to at least be at ringside if not in the match itself instead of Ware. On the heel side, you could tell that Dibiase was being rebuilt as he gets the better of Rhodes while preparing for his big title match the next night, and Rhythm and Blues were just there to fill out the team as Honky goes out quick and Valentine falls to Bret. Obviously, this match is best remembered for the debut of Taker as he looks like an absolute monster in getting two eliminations with one of them being Rhodes, and he was kept fairly protected as he was counted out even though he did tag out so it didn’t make a ton of sense. Other than him, Bret and Dibiase were the stars as they had a good outing in the end until Dibiase got the win which made sense. The crowd was into the match and the Dream Team, but are not happy when Dibiase wins. Dibiase gets the win for his team and would compete in the Grand Finale at the end of the night, but something tells me that big things are going to be coming for the Undertaker.