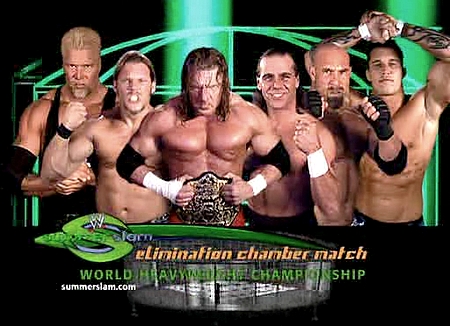 HHH (C) vs. Nash vs. Jericho vs. HBK vs. Orton vs. Goldberg – World Heavyweight Championship

Austin announced this main event on the August 4, 2003 edition of Raw. This was a fairly quick turnaround as the last chamber was only nine months ago. The build shows how damaged HHH was after the last Chamber match where he was in the hospital and lost the championship. Evolution is working to ensure that HHH walks out of the Chamber as the champion which will make Orton’s involvement interesting to watch as the match unfolds. The clips of all six of these men fighting each other is a good use of showing how intertwined they have been for quite some time. I got to say going into this match, I was looking forward to it.

Nash gets a nice reaction coming out which I was surprised of. He just had lost a hair vs. hair match to Jericho on the previous week’s Raw. HHH comes out third, which is utterly bizarre. Speaking of bizarre, long tights? Goldberg comes out next and there is a buzz in the crowd for his entrance with the crowd chanting his name. Looks like the match is starting with Y2J and HBK which is a smart move coming off their classic WrestleMania match.

Thanks for not going with the turd brown tights tonight, Shawn. I was surprised with the wrestling base this match started out with. To me it doesn’t quite fit the tone of the match overall as well as the feud these two men have developed. The crowd starts a chant for Goldberg as Jericho mixes things up with a strike and Michaels paintbrushes him. Jericho works for an early Walls but Michaels reverses into a pinfall attempt. Jericho is in control as our next competitor, Randy Orton, enters.

Orton hits a crossbody for a nearfall on HBK and is looking strong clotheslining Shawn to the steel outside. Orton and Jericho mix it up well. I am impressed with Orton here as his strikes look strong and his high impact moves are hit crisply. Impressive for someone so young in his first big main event match. Orton ends up getting back body dropped onto the outside in the biggest use of the Chamber so far. Jericho slams Orton on the cage then attaches the Walls as Nash enters.

Nash goes right after Orton and sends him straight into the cage. Nash and Jericho pick right up where they left off on Monday. Jericho is sent face first into the cage in a nice spot and a little face grating on the cage continues the damage. Jericho is busted open now. Nash gets a sidewalk slam on Orton for a nearfall. Nash and HBK go after each other now to put over the every man for himself as a narrative. Jericho is straight up getting his ass kicked by Nash as a big boot. Out of nowhere, HBK hits the Sweet Chin Music and Jericho pins Nash eliminating him. Nice knowing you in the main event, Kevin. Goldberg chant #2.

As soon as HHH’s door opens, Michaels hits the SCM in a nice spot. Flair loses his shit on the outside and has the jacket off. Nash delivers the Jacknife to Jericho and Orton before he leaves the Chamber. HBK covers Orton who is able to put a foot on the rope. Jericho does the same. Orton, HBK and Jericho slug it out as Goldberg comes in.

Goldberg unloads from the onset. He powerslams Orton into a spinebuster for a huge pop. HBK looks busted open from something but I don’t know what. Goldberg dispenses of HBK and Jericho and spears and pins Orton. So much for protecting HHH, Randy. I was surprised we didn’t get one spot of dissension between those two the way it was played up on commentary. Goldberg press slams Jericho into the Chamber to another huge pop. Jericho then gets speared through the Chamber pod as the crowd is completely abuzz. HBK nips up and hits the elbow on Goldberg. He goes for the SCM on him but gets a spear for his trouble. Jackhammer eliminates him and it doesn’t look like Goldberg can be stopped.

Jericho is slowly rising to his feet and gets another nasty spear followed up by the Jackhammer and we are down to two competitors. HHH has voluntarily locked himself back in the cage and has only had one bit of interaction so far in this match. Even Flair on the outside tries to keep the door shut. The crowd starts chanting for Goldberg as he stalks HHH. Both Flair and HHH tell Goldberg he is #1. Goldberg punches and kicks his way through the pod and HHH is in deep trouble. Goldberg beats on HHH with the crowd chanting his name. HHH keeps getting ricocheted into the steel cage and is busted open, of course, because this is a 2003 HHH title defense. HHH reverses and sends Goldberg into the steel to huge boos. Goldberg reverses with a clothesline and a big pop. Goldberg looks for the spear but HHH has the sledgehammer hidden and hits Goldberg in the back of the head as he is coming in. HHH then pins him. Huh?

The crowd is completely deflated on this. So far, even though HHH’s reign has not been successful at all from a match quality standpoint, besides Booker T it is tough to argue that either Steiner or Nash should have won the belt against him. This changes completely in this match as there was no good reason for Goldberg not to spear HHH down and win the title with the crowd clamoring for it. Goldberg had some up and downs in the WWE but this was as close to the stigma he had obtained in 1998. All of that was erased with the three count and attack by Evolution after the match. It was a HHH wank fest and an unnecessary one at that. Overall the match disappointed me from the standpoint in that it felt rushed and didn’t heavily utilize the Chamber. Certain portions of the match worked with HHH keeping himself locked in and Goldberg drilling people through the pods, but the opening ten minutes felt like the Chamber was an afterthought. Tack on the ending that is absolutely indefensible and you get another lackluster 2003 HHH match.