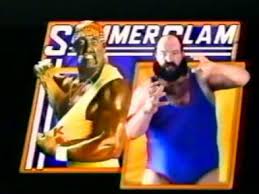 We are now at the biggest event of the summer and there has been a real feeling of change since Wrestlemania VI. While the main event itself was familiar with Ultimate Warrior defending the WWF Title against Rick Rude, the other big match on the card was the return of Hulk Hogan to face the man that took him out back over the spring in Earthquake. It was pretty clear that Quake was being positioned as one of the top heels in the company as they made him look strong at Wrestlemania, and then they had him put Hogan on the sidelines so Hogan could take some time off to film “Suburban Commando”. While logically it seemed like they would push Quake right into a title feud with Warrior, the fact that Hogan came back so quickly kind of forced their hand and they had to have this match here though it was clearly the bigger match than Warrior/Rude.

Since the last time they fought back at MSG on 4/30, the two would have a showdown on the Brother Love Show on the 5/26 Superstars which saw Quake hit Hogan with a chair and then he hit the Earthquake Splash repeatedly, and Hogan was taken out on a stretcher. Quake, Dino Bravo, and Jimmy Hart would brag about ending Hogan’s career and Tugboat would urge fans to send their letters to Hogan and purchase the Hulk Hogan Friendship bracelet. On the 7/1 Wrestling Challenge, a special tribute video for Hogan was shown as various superstars gave their opinion as to whether Hogan would return or not, and it was announced he would return on 7/15 to address his future. On the 7/14 Superstars, Hogan made his return and announced that he was not retiring while also announcing he would face Quake at Summerslam, and he would thank Tugboat for his support as Tugboat said he would be in Hogan’s corner to counter Bravo. On the 7/28 Saturday Night’s Main Event, Hogan cut a promo on Quake who came out with Bravo and they would surround Hogan until Tugboat made the save, and on the 8/18 Superstars Quake and Bravo would attack Tugboat after a match and Quake hit two Earthquake Splashes until the Big Bossman made the save. It was announced that Tugboat would be out for Summerslam and Bossman announced he would be in Hogan’s corner instead, and the two would cut promos on each other leading into the show.

Quake, Bravo, and Jimmy would cut a really good promo earlier in the show as they vowed that Hogan would be stretchered out again and Hogan would also give a good promo, and Quake was red hot as a heel while Hogan got a huge pop from the crowd.  The two men lock up to start with Hogan trying to shove Quake back though he doesn’t move far and they lock up again with Quake shoving Hogan to the mat, and they lock up a third time with Quake again shoving Hogan to the mat and they lock up with Hogan hooking a headlock and Quake whips him off before knocking him down. Hogan rolls outside to regroup with Bossman before returning to the ring and Hogan gets a kick in as he rakes Quake’s eyes, and he pounds on Quake who blocks a slam attempt and he pounds on Hogan. He whips Hogan hard into the corner and continues to pound on him before whipping him into the other corner, but Hogan catches him with a boot to the face and he hits a pair of clotheslines before pounding on Quake. Jimmy and Bravo get on the apron and Hogan knocks both of them down as he knocks Quake down as well, and he knocks Jimmy and Bravo to the floor as Quake rolls outside to regroup with them. Hogan goes outside and pounds on Bravo as Bossman pounds on Quake and they throw both men into the ring, and they hit a double big boot on Bravo as Hogan gets a shot in on Quake and they hit a double big boot on Quake. The ref forces Bossman out as Hogan pounds on Quake until Bravo nails him from behind and pounds on him, and they hit a double slam on Hogan and Bravo slides back outside as Quake drops an elbow on Hogan for a two count. Quake actually goes up top and drops an elbow on Hogan before stomping on his hands and he hooks a Boston crab on, and Hogan grabs the rope to force a break and he rolls outside to regroup as Bravo hits a slam on the floor and throws Hogan back into the ring. Quake hits a slam on Hogan only to miss the elbow and Hogan pounds on him before raking the eyes, but Quake falls on top of a slam attempt for a two count and he hooks a bearhug on as Hogan tries to fight out and he even grabs at the ref while ripping his shirt apart in a funny spot. Hogan manages to fight out of the hold and he knocks Quake back twice only for Quake to catch him on a crossbody and he hits a powerslam for a two count, and he mocks Hogan and hits the Earthquake Splash as Bravo and Jimmy get on the apron and tell him to do it again. Quake hits a second Earthquake Splash for a two count as Hogan starts to hulk up and he no-sells Quake’s shots, and he pounds on Quake and hits a big boot before hitting a slam and the legdrop as Bravo distracts the ref and Jimmy gets in the ring. He pounds on Hogan as the ref yells at Bossman and Hogan picks Jimmy up before tossing him onto Quake, and Bravo and Bossman get in the ring as Bossman nails Bravo and tosses him to the outside while Quake rolls outside to regroup. He trips Hogan up and pulls him outside only for Hogan to rake the eyes and he pounds on Quake who rakes the eyes, and he holds Hogan from behind for Jimmy only for Hogan to move and Jimmy nails Quake with the megaphone by mistake. Hogan picks Quake up and slams him onto the table in a nasty spot before rolling back into the ring as the ref counts Quake out and Hogan gets the win. After the match, Quake and Bravo get in the ring and Quake nails Hogan from behind as he hoists him up in a choke, and Bossman gets in the ring with a chair and he nails Bravo with it before nailing Quake in the back repeatedly with it until Quake lets Hogan go. Bossman pulls the nightstick out as Quake, Bravo, and Jimmy head to the back as we see Quake has some nasty welts on his back from the chair and Hogan poses for the crowd. Hogan gives a pretty passionate promo after the match as he makes his intentions to be WWF Champion again known, and Quake, Bravo, and Jimmy give a great promo too as they show off the welts on Quake’s back and make it clear that they are not done with Hogan.

The match itself was actually pretty good as both men worked hard and put on a pretty fun match. Considering that most of the build was spent building the match up with Hogan on the sidelines and Quake doing most of the heavy lifting, the match was built up very well and the fans were clamoring for Hogan to come back and get his revenge. It was fairly clear that this was the bigger of the two main events though I will give them credit for having Warrior and Rude be the last match, but there is no question that this match was the more anticipated match and a lot of credit goes to Quake for looking like a legit monster. The match itself ended up being very well worked as Quake dominated most of it with Hogan making his big comeback at the end, and Bossman and Bravo played their roles well at ringside and honestly Bossman was a better fit than Tugboat here. The countout was fine as they obviously wanted Hogan to win in his return yet they wanted to keep the feud going, and they kept Quake pretty strong especially at the end when he took the chair shots from Bossman and kept coming despite the nasty welts on his back. The crowd was red hot for the match and popped big for Hogan when he won. Hogan gets the win over Quake by countout and gets a measure of revenge, but this issue is not over yet.