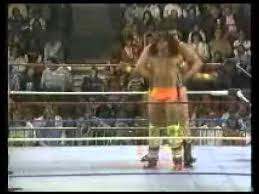 The Ultimate Warrior vs. Andre the Giant (w/ Bobby “The Brain” Heenan) for the WWF Intercontinental Championship

As we come to the final weeks of 1989, it was pretty clear that the stock of the Ultimate Warrior was on the rise as he was rolling as Intercontinental Champion and was the last man standing tall at Survivor Series. While I’m sure many did not know how high Warrior was going to go when 1990 started, it was obvious to most that he was clearly being positioned as the potential successor to Hulk Hogan. On the flip side, Andre the Giant was clearly showing signs that he was nearing the end of his run as an active wrestler and that his body was breaking down quickly. While his last few years have been much better than I think most people expected them to be, by this point he was very limited in what he was able to do and we would see him transition into a new role as 1990 started. However, he would end up getting one more big spotlight match as a singles wrestler at the last Saturday Night’s Main Event of the year which would see him and Warrior finally settle their issues with the title on the line.

This feud has been raging since just before Summerslam when Bobby had Andre try to soften up Warrior prior to his IC Title match with Rick Rude, but it was not enough as Warrior would end up defeating Rude for the title at Summerslam. Warrior and Andre would face each other on the house shows including two matches at Madison Square Garden, and the matches would range from solid affairs to 30-second squashes with Warrior beating Andre in quick fashion. Two nights ago at Survivor Series, Warrior and Andre both led teams into the main event and Andre would end up being counted out within the first 30 seconds of the match, and Warrior would end up being the sole survivor of the match by pinning Bobby to finish off the team. Prior to Survivor Series, it was announced that Andre would receive an IC Title shot against Warrior here at SNME and for the second year in a row, Andre receives a title shot to close out the year. This was a pretty big match for network TV and it was just one big match on what ends up being a fairly loaded card, and it would be interesting to see if Andre would end up walking out as champion or if Warrior will go into 1990 with a lot of momentum.

Both men cut solid promos before the match as we get a quick recap of the feud between the two, and Andre was still pretty hot as a heel while Warrior got a huge pop from the crowd and I thought this was the right match to kick off the show. The two men square off to start the match as Andre mocks Warrior and Warrior poses in the corner, and Andre attacks Warrior from behind and pounds on him before choking him in the corner. Warrior tries to battle back as Andre continues to choke him on the ropes and he hits a headbutt as Warrior falls to the floor, and Warrior rolls back in the ring and gets a shot in as he chokes Andre with his own singlet. Warrior chokes Andre on the ropes and charges at him only for Andre to move as Warrior sails over the top to the floor, and Warrior returns to the ring and Andre kicks at him before pounding on him and he hooks a submission on. Andre hits a headbutt to the back of Warrior’s head and Warrior tries to escape only for Andre to keep the hold on, and Warrior powers his way out of the hold and hits a pair of clotheslines that sends Andre through the ropes to the outside. Warrior goes outside and stomps on Andre before pounding on him and he rolls back into the ring as we go to a commercial break, and back from the break Andre pounds on Warrior from the floor and he chokes him with the bottom rope. Andre returns to the ring and pounds on Warrior only for Warrior to hook a bearhug on Andre, and Andre grinds down on Warrior as he forces his way out of the hold and he hits a headbutt on Warrior. Warrior splashes Andre in the corner and pounds on him only for Andre to hook a bearhug on Warrior, and Warrior tries to fight out of the hold only for Andre to keep it on until he hits a headbutt to the ribs. Warrior gets a shot in and he pounds on Andre in the corner only for Andre to grab him by the hair and he hits another headbutt, and Warrior ducks a shot and hits a clothesline as Andre gets tied up in the ropes and Warrior chokes him. Warrior charges at him only for Andre to catch him with a boot as Bobby grabs the belt and gets in the ring, and he tries to whip Warrior with it only for Warrior to avoid it and he gets a shot in on Bobby. The ref manages to free Andre from the ropes as Warrior pounds on Bobby and he presses him up before tossing him onto Andre, and both men roll outside as the ref calls for the bell and Warrior is awarded the win by disqualification and he retains the title.

The match itself was solid as both men worked hard for the 8 minutes they got and put on a good match for TV. This was a good showcase for Warrior as the top midcard face going up against the force that is Andre, and I’m glad they had them at least work a decent length match as opposed to the squashes they’ve been doing the last month. Warrior was really hitting his stride as a worker by this point and Andre was still giving his all despite breaking down by this point, and they still had some good chemistry though it did seem at times that they were almost working against each other. The ending was a bit of a downer as Warrior honestly could’ve used a clean win over Andre on TV to really put him over, but the DQ doesn’t hurt it too bad as they had some plans for Andre after this and wanted to keep him somewhat strong while still giving Warrior the win. The crowd was red hot for the whole match and they did pop for Warrior when he won. Warrior gets the win over Andre by DQ and retains the title as both men finally move on.