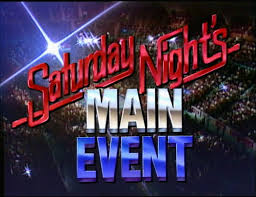 Demolition vs. the Brainbusters (w/ Bobby “The Brain” Heenan) for the WWF Tag Team Championships

So after having our first Vintage Vault take place outside of the hallowed halls of Madison Square Garden, we now have back-to-back shows to talk about and that is the double shot of Saturday Night’s Main Event. After giving it a bit of thought, I thought it would only be fair that I review a match from each show and it makes it even easier that both shows features the same match. In this case, we have the double shot here of Demolition defending the tag team titles against the Brainbusters as the tag division by this point was at its zenith in terms of depth and talent. It was pretty clear by this point that the Brainbusters were now positioned as the top team on the heel side of the ladder and it looked like Demolition were pretty untouchable after being tag champions for over a year now. It was going to be interesting to see how the two teams would be able to mesh and if they could have some good matches, but knowing how good the Brainbusters were and how solid Demolition were at the time there was no question that these two teams would tear the house down.

Both teams cut good promos before the match and the Brainbusters had solid heat as heels while Demolition got a big pop from the crowd. Smash starts off the match with Blanchard and they lock up with Smash shoving Blanchard to the mat, and Blanchard avoids a big boot only for Smash to hit a clothesline on Blanchard. Blanchard rolls outside to regroup and Smash chases him back into the ring before catching him in a bearhug, and Bobby gets on the apron and distracts the ref which allows Anderson to come in and knee Smash in the back. They pound on Smash in the corner and whip him into the other corner only for Smash to catch both men with a clothesline, and Smash grabs Anderson and tags Ax who pounds on Anderson and he hits a back elbow. He hits a slam on Anderson only for Anderson to rake the eyes though Ax reverses a whip and Anderson avoids a shot from Smash, and Ax clotheslines Anderson in the back and puts him on the top rope as Smash tags in and they pound on Anderson. Smash hooks a headlock on Anderson who whips him off and Blanchard knees Smash in the back from the apron, and Smash grabs at Blanchard as Anderson knees him in the back and he hits a suplex on Smash who no-sells it. He gets a kick in and hits a slam on Anderson as Blanchard comes in only for Smash to hit an atomic drop on him, and Ax comes in and hits a slam on Anderson before hitting a slam on Blanchard. The Brainbusters regroup on the outside as Blanchard returns to the ring and he pounds on Ax who no-sells his shots, and Ax pounds on Blanchard in the corner and whips him into the other corner only for Blanchard to catch him with a pair of knees to the face. Blanchard goes up to the middle rope only for Ax to catch him and ram him into the corner before whipping him into the other corner with Blanchard sailing over the top to the apron, and Smash fakes Blanchard out as Ax hits a back elbow that knocks Blanchard to the floor. Smash presses Blanchard up and tosses him back into the ring as Ax clotheslines Blanchard over the top to the floor with Blanchard landing on top of Bobby, and Bobby tries to get in the ring and the Brainbusters hold him back as we go to a commercial break. Back from the break, the Brainbusters return to the apron as Ax slings Blanchard over the top back into the ring, and he knocks Blanchard down and hits a snapmare before hooking a submission on. Smash tags in and pounds on Blanchard before whipping him into the corner as he hoists him up in a choke, but Anderson comes in behind the ref’s back and stomps on Smash’s knee as he lets go of Blanchard and Anderson tags in. Anderson tags in and hits a snapmare before stomping on Smash and Blanchard tags in, and Anderson trips Smash up as Blanchard goes up top and hits a seated senton on Smash. He hotshots Smash on the top rope and tags Anderson who hits the spinebuster on Smash for a two count, and Blanchard tags in and kicks at Smash before doing a strut to taunt Ax and he chokes Smash on the top rope. He pounds on Ax and holds him up as Anderson chokes him from the apron and Anderson tags in as Blanchard keeps Smash from tagging, and Anderson knees Smash in the back and hits a snapmare before dropping a knee on him for a two count. He hooks a submission on Smash who fights to his feet and he powers Anderson to the mat, but Anderson hits a drop toehold on Smash as Blanchard tags in and gets a shot in on Ax before tossing Smash to the outside. Anderson hits an axehandle off the apron onto Smash and tags in as he pulls Smash back into the ring, and he pounds on Smash in the corner as Smash tries to battle back and they knock each other down. Smash reaches for the tag as Anderson holds him back and Blanchard pulls Ax off the apron while Anderson hits an axehandle on Smash, and Anderson knocks Ax off the apron and pounds on Smash as Ax gets in the ring. Blanchard gets in the ring as well and the two teams brawl with Ax hitting a clothesline on Anderson, and Ax throws the ref to the mat and stomps on Anderson as Smash whips Blanchard into the corner. Demolition toss the Brainbusters over the top to the floor as the ref calls for the bell, and he awards the match to the Brainbusters by DQ which means Demolition retain the titles.

Following this match, both teams would go back to their house shows feuds with Demolition feuding with the Twin Towers and the Brainbusters feuding with the Bushwhackers, and it was announced on TV that the Brainbusters would get a rematch against Demolition at our next SNME though this time it would be a 2-out-of-3 falls match. It was good continuity for TV purposes that we see this match again, but it would’ve been nice to see them face off on the house shows between the two SNMEs.

The matches were both pretty good as both teams worked hard and put on a pair of solid matches with the July match clearly being the better match of the two. You knew that the Brainbusters were the kind of team that could mesh well with anyone and they prove that here as they put on two good matches with Demolition, but Demolition also held up their end of the bargain in both matches and were hitting their stride as a team by this point. The match from May was an interesting match in that Demolition pretty much dominated the match only to get DQ’ed in the end after losing control, and after that happened you had a feeling that if they had a rematch the Brainbusters might win the titles. Sure enough, that happens in the July match which was a great match that built off the May match and both teams went all out for the 13 minutes they got, and it was cool seeing Andre get involved and help his fellow stablemates get the win. It was a shocking moment seeing Demolition finally lose the titles after having a stranglehold on them for so long, but it was a great win for the Brainbusters and the Heenan Family in general as they now had two belts in the Family. The crowd was hot for both matches though they were hotter for the July match, but they are not happy with both decisions especially in the July match as they are stunned that Demolition lost the titles. The Brainbusters get a pair of wins over Demolition with the second win earning them the tag titles, but this issue is not over yet.