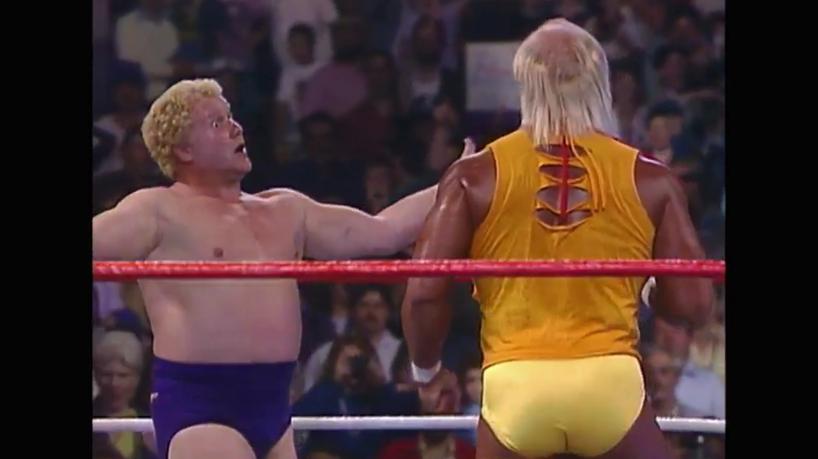 So we were now a mere 15 days away from Wrestlemania IV and there was a lot of buzz surrounding that show, specifically the big tournament to crown an undisputed WWF Champion. Following the controversy that surrounded the Main Event match, it seemed pretty obvious that the tournament was going to see Hogan face either Andre or Dibiase in the finals and reclaim the title he had been screwed out of back in February. I’m sure it was pretty jarring for fans to see Hogan without the title after having a stranglehold on it since January of 1984 and they wanted him to get his revenge and be champion once again. On the other side of the coin, Race seemed to finally be losing a bit of steam after a pretty solid 1987 to the point that he’s not even in the tournament and was set to compete in a battle royal at Wrestlemania IV. It was pretty clear that he was probably not going to be hanging around much longer so he was going to do all he can to still put on good matches. It was pretty cool to see these two hook up here for this show as I’m sure most probably didn’t know they had the brief summer feud during 1987, so it would be interesting to see if they can put on a good match though I don’t think it would match up to their previous matches last year.

Following the last MSG show in February, these two men pretty much stayed away from each other as Hogan would continue teaming with Bigelow against Andre and Dibiase while Race would work the house shows with the new young stud in the company that was the Ultimate Warrior. On TV, it was announced that the two men would face off here at this show while also hyping their involvement at Wrestlemania with Hogan being in the tournament and Race being in the battle royal. It was pretty cool to see Hogan in a match like this as Race was still seen as a top heel despite having lost some steam, so it would be interesting to see how the match would go and if Race could pull the upset win especially after what happened at the Main Event.

Bobby and Race give a good promo before the match as Bobby is beaming with pride about Andre defeating Hogan back at the Main Event and they vow to have Hogan bow to Race, and Hogan gives a fired up promo saying that he says he will go through Race to get to the tournament. Hogan gets the big pop from the crowd while Race was still pretty hot as a heel, and I thought Vince and Jesse were bringing up some good points about if Hogan is mentally ready for this match after losing the title last month. Hogan chases Bobby around the ring and to the back before the match begins as we take a quick commercial break, and back from commercial Hogan charges the ring and Race drops a pair of elbows on him to start the match though Hogan no-sells them. Race begs off before catching Hogan with a headbutt and he hits three more headbutts though Hogan no-sells them as well, and he gets a kick in and he pounds on Race before knocking him down. He stands over Race and tears his shirt off before hitting a clothesline on Race as Bobby returns to ringside, and Hogan hits a second clothesline before hitting a third that sends Race over the top onto the timekeeper’s table. Hogan goes outside and rams Race into the apron before hoisting him up and ramming him into the post, and Hogan stalks Bobby again only for Race to nail him from behind and he sets up for a piledriver on the floor only for Hogan to backdrop him onto the floor. Hogan hits an atomic drop on Race and rams him into the post before breaking the count and he hits a slam on the floor, and he stomps on Race and throws him into the ring before nailing a high elbow and he knocks Race down twice. He pounds on Race and takes the tape off his wrist before choking Race with it and he hits a clothesline with the tape, and he continues to choke Race on the mat and pounds on him before choking him on the ropes. Bobby grabs at Hogan’s leg and Hogan pulls him onto the apron before choking him only for Race to nail him from behind, and Race hits a headbutt on Hogan before hitting a falling headbutt and he drops a knee on Hogan. Race hits a belly-to-belly suplex on Hogan and drops a knee on the throat before hitting a piledriver, and Race stomps on Hogan and throws him to the outside before going out himself. He nails Hogan and lays him on the table before moving it around and going up to the apron, but Hogan avoids the diving headbutt and Race crashes through the table in a nasty spot. Amazingly, Race recovers first and throws Hogan back into the ring before pounding on him, and Race goes up top and hits the diving headbutt for a two count as Hogan starts to hulk up. He no-sells Race’s shots and gets a kick in before pounding on Race as he whips him into the corner and splashes him, and Hogan hits a clothesline and the legdrop which gets the three and he wins the match. After the match, Bobby gets in the ring with a pair of brass knuckles and nails Hogan from behind though Hogan no-sells it, and he chases Bobby out of the ring and poses for the fans. We then hear from Hogan one more time at the end of the show as he hypes the tournament and vows to win the title back.

The match itself was pretty good as both men worked hard and put on a fun sprint of a match that could’ve reached the next level if given a few more minutes, but for SNME standards this was perfectly fine. It was cool seeing Hogan work with such aggression in the match to the point that Vince and Jesse bring it up on commentary, and Jesse had some great points about how Hogan has lost his mind due to losing the title and it could cost him in the end. It made sense that the match almost came about like a squash as Hogan pretty much dominates Race with Race getting a few shots in though not looking particularly strong. Obviously, the match is best remembered for the bump that Race takes through the table and it would lead to him suffering a severe hernia that took him out of action, but being the tough bastard he is Race continues the match and even goes a few more months before being forced to the sidelines. That was pretty revolutionary for the time as you never saw anyone go through a table like that and the visual of the table being bent when Race went through it is still one of the most memorable moments in SNME history. The crowd was red hot for the match and popped big for Hogan when he won. Hogan gets the win over Race here on SNME and both men move on as Hogan looks to the tournament and the chance to regain the WWF Title.