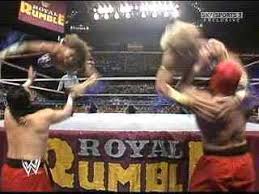 The Rockers vs. the Orient Express (w/ Mr. Fuji)

We now begin a brand new year in 1991 and as 1990 was coming to an end, the tag division in the WWF was in a real state of flux as you had a couple of teams that didn’t seem to know where they were going. One of those teams was the Rockers who had a pretty pedestrian 1990 though part of that was due to Shawn Michaels’ injury, and then they even had the phantom title change in October that was completely whitewashed and now they are looking for some direction as the year started. It felt like they were running out of time to be considered the top team of the company especially after the phantom title change, and you had to wonder how much longer they were going to last either in the company or as a team. Another team that had some question marks surrounding them were the Orient Express as they started 1990 fairly well, but they quickly nosedived over the months and by the end of the year Sato was gone and Kato was brought in. These two teams faced off at Wrestlemania VI which the Express won by countout in what was deemed a pretty subpar match, and now they face off here on the first PPV of 1991 in a rematch and you would hope that maybe it would be at least somewhat better than the WM match.

As 1991 started, the Rockers were surprisingly MIA on the house shows while the Orient Express would feud with the Legion of Doom, and on TV it was announced the two teams would face off here and they would cut promos on each other leading to the show. It was interesting that they didn’t put a lot of focus on the fact that this was a rematch from WM even though the Orient Express had gone through a change, and they really treated this like it was the first time these two teams are meeting each other.

The match itself was great as both teams worked hard and put on a fantastic match which to this point has to be one of the best openers in PPV history. With all respect to Sato, it was clear that Tanaka and Kato had much better chemistry together going back to their days as Bad Company in the AWA and you could argue that the Rockers were about to have one of the best years of their run. There was no question that this match was much better than their WM match though to be fair, the WM match was on a much more stacked card and wasn’t given much time so this match had a low bar to clear to begin with. It was also smart to have this be the opener and they gave them a lot of time as the match goes over 19 minutes, and this was a big win for the Rockers as they haven’t gotten a lot of wins on PPV and this was a good bounce back for them after a blasé 1990. The crowd was red hot for the match and popped for the Rockers when they won. The Rockers get their win back over the Express and both teams move on.