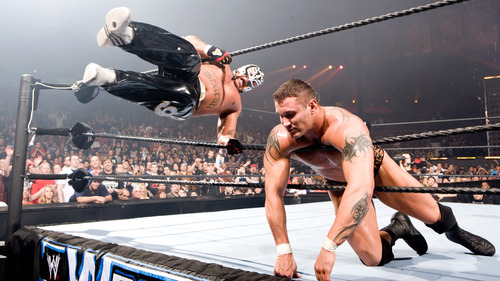 Following the tragic passing of Eddie Guerrero the past October, the WWE has done a lot to push Rey Mysterio into that role that Eddie once had. Rey had been dedicating his career to Eddie and that was very prevalent when Rey dedicated his win at the Royal Rumble to Eddie’s memory. While one might think it was just a nice way to keep Eddie’s memory alive, I believe that it only added more pressure to Rey and implied that he only got pushed because of his relationship with Eddie.

On the other side of the coin, Randy Orton was coming off a year long feud with the Undertaker and there were strong beliefs that he was going to be in the main event of Mania. However, it was around this time that his backstage attitude was not the best as he believed that he deserved to be treated like a star. This was furthered implied when Orton did not win the Royal Rumble though again that was more to further Rey’s story. Despite this, there were still many that had the belief that Orton would still get the title shot and compete at WM.

The feud between these two began right after the Rumble when Rey thanked Eddie for being there in spirit to help him win the Rumble, but Orton demanded a match against Rey for the WM title shot. Rey looked up to the heavens looking for an answer from Eddie though Orton got to Rey when he said that Eddie was not in heaven, but in hell. The next week, Orton rode out in Eddie’s low-rider to further taunt Rey and also attempted to read from Eddie’s book to prove he wasn’t a saint. Rey would jump Orton from behind and in a pretty vicious move, he dropkicked Orton’s head against the post and gave him a concussion. Orton would get one more jab in at Rey by saying that unlike Eddie, he would never be in the main event of Mania. As much as it was done to really put Orton over as an asshole and give Rey sympathy, it did get uncomfortable at times due to the exploitation of Eddie’s death.

Before the match, Rey is met backstage by Chavo and Vickie Guerrero as well as Chris Benoit who had just won the United States Championship minutes ago, and they all gave support to Rey. Rey does get a big pop from the crowd as the “Eddie” chants began almost immediately while Orton was pretty hot as a heel. Orton plays up the confidence and cockiness perfectly while Rey is very stoic in his approach, and they lock up to start with Orton backing Rey into the corner and taunting him. I like how early on Cole and Tazz play up how Orton would have the size advantage over Rey as Orton continues to be cocky, and he takes Rey to the mat and rides him until Rey grabs the ropes. I think it’s interesting how they kept it basic early on considering how much Orton has tweaked Rey over these last weeks, and Rey keeps it on the mat before hitting the modified bulldog on Orton. Rey now starts throwing punches and quickens the pace until his misses the springboard crossbody, and some in the crowd now starts chanting “RKO” though Orton yells that he doesn’t need them.

He starts to slow down the pace by methodically stomping and pounding on Rey, and now the majority of the crowd chants “Randy Sucks” as Orton drops a knee on Rey. He continues to taunt Rey by slapping his head around before whipping him hard into the corner, and the “Eddie” chants fire up again as Orton continues to pound on Rey. At one point, you have to note that the “Eddie” chants may hurt Rey more than help him as the crowd should chant “Rey” or “619” instead of just “Eddie”. Rey surprises Orton with a stiff kick which makes sense as they finally play up the concussion that Orton sustained, and then he hits a headscissors that sends Orton to the outside. In probably the nastiest spot of the match, Orton catches Rey on a senton and blocks a hurricanrana by swinging Rey right into the post. Orton throws Rey into the ring and wisely goes after the arm by hooking an armbar on, and Rey tries to battle back by using his quickness to keep Orton off balance. But Orton slows it right back down with a kick and he hoists Rey onto his shoulder before hitting the neckbreaker, and he goes right back to the arm of Rey. Another note here is as great as they have been for the last several year, Cole and Tazz were starting to feel like a bit much as they constantly rooted for Rey and accosted Orton for his actions.

Some of the crowd finally start chanting “619” to try and rally Rey back as Orton continues to work the arm, and Rey again tries to fire up by catching Orton with a hurricanrana. Orton recovers first and stomps right on the arm as Rey rolls to the outside, and then he stomps on Rey’s hand while its laying on the steps before slamming the arm down onto the steps. I do like how Orton took a unique tactic here of working the arm instead of doing his usual chinlock spots. Orton uses the ropes to continue to work on the arm and again tries his elevated neckbreaker, but Rey escapes with an armdrag and sends Orton to the outside. Orton returns to the ring only for Rey to meet him with a flying forearm, and then he hits a drop toehold that sends Orton into the buckle with Orton doing his usual groggy sell to play up the concussion. Rey goes up top only for Orton to nail him first and he puts Rey on shoulders as he goes up to the middle rope, but Rey escapes with a nice sunset flip off the middle rope which the crowd popped for. Rey hits a spin kick and does the Eddie shimmy which again the crowd pops for as he fires up on Orton, and then he hits a perfect springboard senton on Orton as Orton is bleeding a bit from his head. Rey hits a nice reverse neck snap on Orton and escapes a powerslam before kicking at Orton’s leg, and Orton catches him on a springboard moonsault only for Rey to hit a modified swinging DDT. Orton pokes Rey right in the eyes though Rey battles back with kicks and goes up top, but Orton catches him coming in with a nice dropkick. Orton sets up for the RKO only for Rey to catch him right in the face with the dropkick, and Orton falls into the ropes as the crowd starts pops since they know what’s next. Rey looks for the 619, but Orton ducks it and rolls Rey up while grabbing the ropes which gets the three and Orton is heading to Mania.

After the match, Rey is left in utter shock as is the crowd while Orton is soaking it up, and Orton further rubs it in by saying that he’s going to Mania and asks where Rey is going. Rey does a great job in selling his frustration as he heads to the back and that is furthered when he meets up with Chavo, Vickie, and Benoit as they try to tell Rey that he did his best. Rey continues to sell his frustration as he is slamming his fists against the wall as he feels that he let everyone, including Eddie down.

The match itself was actually very good as both men worked hard and put on a solid match. Despite his backstage reputation not being the best, Orton still busted his ass here as he was completely embracing the cockiness and arrogance of his character. He shows that throughout the whole match though he would get serious when he needed to, and after he won he is completely arrogant to the point that he probably believed Rey never stood a chance. Rey was pretty good here as well by taking the beating from the bigger Orton and he sold the arm pretty well, and as mentioned I was glad Orton mainly worked the arm instead of doing the chinlocks. The crowd was pretty hot for the start and picked up at the end, but there were some portions in the middle where they were a bit more quiet than they should’ve been. Considering they wanted Rey to be a sympathetic face by tying him to Eddie, there were some in the crowd that did side with Orton. I thought Cole and Tazz were very good too even though I did say that they were a bit much at times, but they put the story over strong and also sold the ending very well in that they knew Rey was blaming himself for losing. Of course, the whole idea of using Eddie’s death to help prop Rey up was a bit much though I do feel it didn’t bog down the match. It really came to the forefront after the match when we saw Chavo and Vickie backstage trying to console Rey after his match. The question now is what will happen to Rey as it seemed like they wanted Orton in the WM match anyway, but does Rey just get brushed to the side after all that build from the Rumble? It would be interesting where they would go from here and what they ended up doing after this almost made this match unnecessary, but the match as a standalone is a very good and oft-forgotten match for both men.