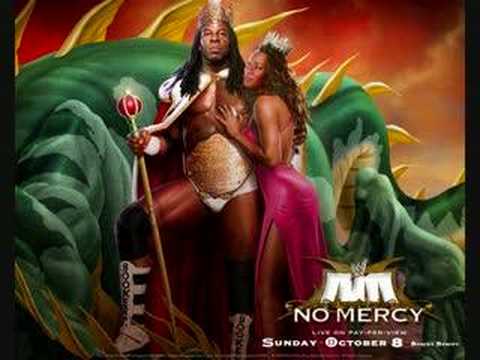 As we know when it comes to wrestling, one of the things that is completely unavoidable is someone being forced to the sidelines due to injury. Whether it be a legitimate injury that can keep someone out for an extended period of time or a worked injury to keep a feud simmering, there is always more than one way to right someone out of the angles. In the case of Chris Benoit, he was written off TV back in May thanks to Mark Henry as he wanted to heal up his body and recharge his batteries. It was also revealed that Benoit wanted to tend to some personal issues with his family and little did anyone know that this would essentially lead to the events of June 2007, but we have some time before we get to that. After about 5 months of being out of action, Benoit was ready to make his return and he would get a good challenge to get back in the groove.

There was no build on TV for this match as the build occurred on the PPV itself with William Regal telling King Booker that he would talk to Finlay and try to get him to work with Booker in their fatal 4-Way match. Later in the night, Regal was looking for Finlay only to run into Vito who was working out with a jump rope while wearing a dress, and a disturbed Regal ended up running into a cart of condiments and got his suit ruined. Later in the night, Regal was getting cleaned up in the showers when Vito appeared again which freaked Regal out again, and he ran through the halls in just a towel while unintentionally exposing himself. He would run into GM Teddy Long who reprimanded Regal for his actions, and he would put Regal in a match tonight to teach him a lesson. This whole show-long angle was pretty amusing seeing the uptight Regal get so freaked out by Vito to put his gimmick over.

Regal was still pretty hot as a heel as he comes out for this impromptu match and his opponent is revealed to be the returning Chris Benoit, who gets a big pop from the crowd. The two men lock up to start as the crowd chants “Benoit” and Benoit gives a clean break in the corner, and they lock up again with Regal working on the arm only for Benoit to quickly escape. They lock up again with Regal hooking a headlock and he takes Benoit to the mat, and Regal transitions to a front facelock only for Benoit to escape and he takes Regal to the mat. Regal dives for the leg and Benoit works on his arm only for Regal to turn back into the headlock, but Benoit counters and they engage in a test of strength with Regal taking control and he trips Benoit up. He tries to force Benoit’s shoulders to the mat for a two count and Benoit gets to his feet, and they engage in another test of strength with Benoit taking Regal down only for Regal to bridge up and avoid being put on the mat. Regal hits a series of stiff kicks to Benoit’s head and nips up before hitting a monkey flip on Benoit before rolling through, but Benoit catches him in a bodyscissors as Regal tries to force his shoulders to the mat again. This has been an impressive first few minutes as Benoit looks like he hasn’t missed a step and Regal gets to show off his abilities.

Regal escapes the hold and works on Benoit’s leg while grinding his boot into Benoit’s face, and he goes back to the arm only for Benoit to hit a series of stiff chops, and the two men trade blows with Benoit taking control and he hits a German suplex. Regal grabs the ropes to block another one and hit a back elbow, and they lock up with Benoit hitting a series of stiff headbutts that busts Regal open. Benoit hits another German suplex before going up top and he hits the diving headbutt for a two count, and Regal rolls onto the apron and gets a kick in only for Benoit to block a suplex attempt and he hits a series of knees. Benoit attempts a German suplex off the apron only for Regal to block it, and he hits a pair of back elbows before hitting a stiff DDT on the ring apron. Both men roll back into the ring and Regal drops an elbow on him for a two count, and he hooks a submission on Benoit before hitting a series of knees to the head and he knocks Benoit down with a stiff punch. He drops a knee on Benoit’s head and chokes him on the mat, but Benoit battles back and knocks Regal down only for Regal to block a Sharpshooter attempt by kicking Benoit in the head repeatedly. Regal hits a running knee on Benoit for a two count before hooking a modified abdominal stretch on, but Benoit escapes by ramming Regal into the corner and he gets a knee in before hitting a pair of stiff chops to the head. Regal gets a kick in on Benoit and hits a pair of T-bone suplexes before dropping a knee on Benoit for a two count, and Regal looks for the Regal Stretch only for Benoit to grab the arm as Regal grabs the ropes. Regal gets a headbutt to the ribs in and hits a stiff kick that knocks Benoit down for a two count, and Regal hooks a surfboard submission on Benoit who escapes the hold with a trio of stiff forearms. Regal stomps on Benoit and attempts a dragon suplex only for Benoit to turn it around, but Regal takes Benoit to the mat and he attempts another suplex only for Benoit to hit the dragon suplex on Regal. Benoit then attempts the Crossface as Regal tries to block it only for Benoit to clinch the hold on, and Regal is forced to tap out and Benoit wins the match.

The match itself was very good as both men went all out for the 12 minutes that they had and put on a fun, old school grappling match. It was clear that the time off for Benoit was good for him as he looked to be in pretty good shape, but you do have to wonder if this was the best match for him with so many stiff shots he took to the head. This was also a good spot for Regal after spending most of the summer as one of King Booker’s stoolies, it reminded everyone that he could still go and was still very vicious in the ring. It was also the perfect capper to his night as he looks like a fool for most of the night and then has to get in the ring with Benoit, and he does give him a fight before tapping out clean to him. As mentioned, the crowd gave Benoit a big ovation when he came out though they were a bit quiet throughout the match which was a bit surprising and disappointing, but they do pop big for Benoit when he won. Benoit gets a big win in his return over a game Regal and both men move on.