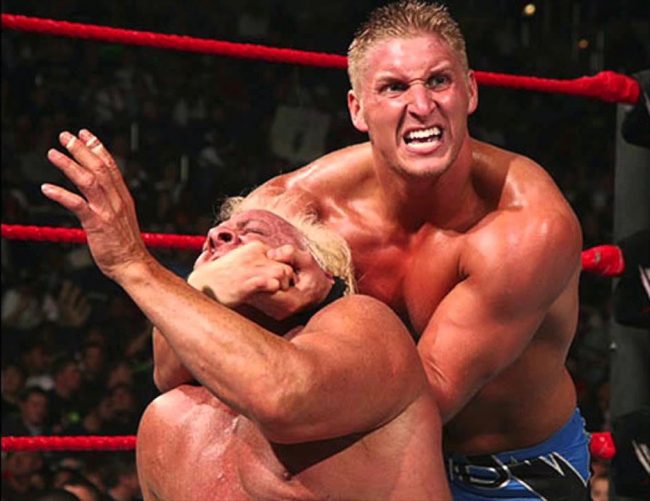 As 2006 started and 2007 was beginning, there were two guys on the RAW brand that seemed to be at a crossroads in their respective careers. On the one hand, you have Ric Flair who seemed to have no real direction at this point and you almost had to wonder if maybe he was nearing the end of the line in terms of being a wrestler. As we would end up seeing, 2007 would be one of his least active years and there was a feeling that he was probably going to be hanging it up soon. On the flip side, you have Kenny who had spent 2006 as part of the Spirit Squad and the group had some potential despite the goofy gimmick, but they would end up being the punching bags of DX and were pretty much treated as jokes. With the group coming to its end by the end of the year, it was clear that Kenny was looked at with the most promise of everyone in the group and looked to recover from the Spirit Squad and have a breakout year in 2007.

The feud between Flair and Kenny was pretty much a continuation of the Flair/Spirit Squad feud that raged through most of the fall of 2006. The night after Survivor Series on the 11/27 RAW, the Squad would lose a handicap match to Flair and DX and later in the night, the Squad were put into a box addressed to “OVW” and shipped out of the main roster. It was an interesting way to officially put an end to the Spirit Squad, but it also felt like a burial which was something that DX did regularly throughout the year. The next week, Kenny would make his return under the name Kenny Dykstra and offered his assistance to Rated RKO during their match later that night, and he would help Rated RKO and MNM defeat DX and the Hardys in the main event only to be destroyed by DX after the match. The next week, Kenny would resume his feud with Flair as Flair would pin Kenny in a six-man tag only for Kenny to assist Rated RKO in destroying Flair and DX after the match. On the 12/18 RAW, Kenny would defeat Flair clean and Flair offered a handshake to Kenny after the match, but Kenny refused and on the 1/1 RAW Kenny would again defeat Flair in a tag match which would lead to this match being made. This was an interesting feud as they’ve now had Kenny pin Flair twice in separate matches to try and put him over as being smarter than Flair, but I think it would’ve made more sense for Flair to steal a win from Kenny to set up this rubber match. I’m sure that it was also weird to see Flair job like this to a former cheerleader, but again it was clear that Kenny was looked at very highly and using Flair to put him over was an interesting tactic.

Flair gets his usual big pop from the crowd while Kenny was still pretty tepid as a heel, and he comes out wearing a mock-Flair robe to further taunt Flair and he says that Flair will cry that he lost their upcoming match due to Flair being attacked the previous Monday. The two men lock up to start with Kenny hooking a headlock and he knocks Flair down before doing a strut to mock him, and they lock up again with Flair hooking a headlock and he knocks Kenny down as the crowd chants “Kenny Sucks”. Kenny leaps over Flair and hits a dropkick for a two count before dropping a fist on Flair, and he pounds on Flair in the corner and rams him into the buckle. The two men trade blows with Kenny taking control only for Flair to reverse a whip into the corner and he hits a backdrop on Kenny, and he pounds on Kenny on the ropes before hitting a back elbow. He knocks Kenny over the top to the floor and then he hotshots Kenny on the top rope, but then Kenny trips Flair up and pulls him outside before hitting a suplex on the floor. He throws Flair into the ring and gets a two count before hitting another suplex for a two count, and then he drives the elbow into Flair’s back three times for a two count. Kenny hooks a Boston crab on and sits back on Flair who refuses to tap and he crawls towards the rope to force the break, and Kenny drops a fist on Flair and stomps on him before mocking him. He pounds on Flair in the corner as Flair battles back with super stiff chops and the two trade blows again, and Kenny knocks Flair down and pounds on him on the mat. Kenny again mocks Flair and attempts the figure four only for Flair to surprise him with a small package for a two count, and Flair fires up on Kenny with chops and pounds on him in the corner. Kenny reverses a whip into the corner only for Flair to catch him with a back elbow before going up top, but Kenny catches him first and tosses him to the mat. Kenny goes up top and hits a missile dropkick on Flair for a two count only for Flair to block a whip and he rakes the eyes, and then he hits a pair of chop blocks on Kenny’s knee before dropping a knee on him. Flair steps on Kenny’s groin briefly before hooking the figure four on to a pop, and the crowd continues to get hot for Flair as he slaps Kenny in the face only for Kenny to drag Flair to the ropes and he grabs the rope to force the break much to the crowd’s displeasure. He pounds on Kenny in the corner and shoves the ref away when he tries to back him up, but this allows Kenny to hit a low blow and he hooks a small package which gets the three and Kenny wins the match. After the match, Kenny celebrates like he won the world title while being helped to the back and Flair is left in the ring not knowing what happened in the end.

The match itself was decent for the ten minutes that it got as both men worked hard and put on a solid, if somewhat underwhelming match. It was interesting because you could tell there seemed to be flashes of promise with Kenny and that he did have some potential, but I think it was becoming clear that Flair was starting to wind down as he was not looking the best and the last year really took a toll on his body. Obviously, the main issue that will probably be discussed is whether Flair should’ve been in this spot to begin with and if Flair at this point should be putting young guys over. Some might argue that Flair is the type of legend that shouldn’t be used in this manner, but given that he was nearing the point that he was probably going to be hanging it up soon this was a good spot to give some rub to young guys. Plus, Flair was always a guy willing to make his opponent look good as he was doing the same thing even in his prime in the 80s and 90s. On the flip side of that argument, you could argue that beating Flair at this point actually doesn’t mean as much as it would’ve during his prime as he has been wrestling often in the 2000s and was also losing a lot on TV and PPV. So while the intention of this might have been positive, you do have to wonder if it really helped Kenny to beat Flair three times in a row and if it really helped get him over. Also adding to that is that they wanted Kenny to seem like a main event player by aligning him with Rated RKO and feuding with Flair, but he had been beaten down badly during his Spirit Squad run that he wasn’t going to be taken seriously. Plus while he did have some ability in the ring, I always thought that Kenny lacked something to help push him to the next level and we will see that play out over the year which in essence makes these wins against Flair pretty much useless. The commentary was pretty spotty throughout the match as well though they did try to put Kenny over in the end that he used a Flair-like move to outsmart Flair and beat him at his own game. The crowd was a bit in and out for the match and did pop for Flair in spots, but they were not happy when Kenny won and the reception was pretty bland when he did. In any event, Kenny does get his third win in a row over Flair and both men finally move on from this feud as Kenny looks to step up further while Flair would head off in a different direction to help another young guy.