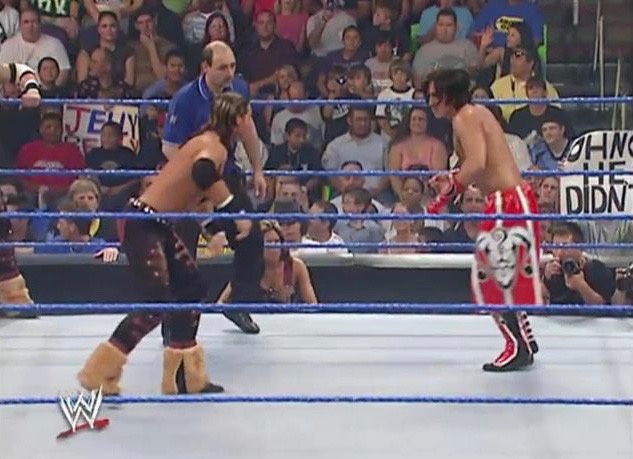 Since debuting last year, MNM has been the standard bearer for the tag division on Smackdown and have already been tag team champions three times. They have been considered a main event tag team due to the teams they have faced though by this point it seemed like they were running out of credible challengers. On the flip side, London and Kendrick first began teaming up in 2003 before Kendrick was released though he would return in late-2005 at which point they reformed their team. They would update their look with matching tights and masks which was pretty cool as it showed their unity as a team, and it was good for both men as they could now stand out instead of being background players in the Cruiserweight Division.

I thought this was a great choice to have as the opener for this show as London and Kendrick were pretty over as faces while MNM were still pretty hot as heels as they still had their usual swagger despite coming in on a losing streak. It is pretty sad knowing that this is Michael Cole and Tazz’s last PPV together as the commentary team for Smackdown, and they come right out of the gate by putting London and Kendrick over and how desperate MNM is. London starts off the match with Nitro and they lock up with Nitro backing London into the corner, and they exchange shoves as they lock up with Nitro going behind London and hooking a headlock. Nitro knocks London down and MNM pose in their corner to put over their cockiness much to the crowd’s hatred, and Nitro gets a kick in on London and goes back to the headlock. He knocks London down again only for London to trip him up though it almost looked like a slight botch, and London hits a beautiful armdrag before working on the arm. Kendrick tags in and comes off the top rope with a blow to Nitro’s arm before tagging London back in who does the same, and it makes sense that London and Kendrick would want to keep things at a quick pace. London and Kendrick hit a double flying forearm on Nitro for a two count and Kendrick goes right back to the arm, but Nitro backs Kendrick to his corner and tags Mercury who nails Kendrick and rams him into the buckle. He whips Kendrick into the corner only for Kendrick to leap over him and hit a hiptoss, and then he hits a dropkick for a two count. Tazz makes a good point here how MNM are supposed to be tag team specialists, but they are getting outworked by London and Kendrick as they have for the past month.

Kendrick goes after Mercury’s arm and Mercury whips him off only for Kendrick to slide under him and hit an armdrag before going back to the arm. London tags in and they hit a double hiptoss on Mercury before both men drop an elbow on him. They scare Nitro from the ring as Mercury rolls outside and MNM look to regroup, but then London backdrops Kendrick over the top onto MNM in an awesome spot to a pop. He throws Mercury into the ring as London goes up top, but Mercury avoids the crossbody as London hits the mat hard and gives MNM the advantage. Nitro tags in and stomps on London before stepping on him and tagging Mercury as they hit a double gutbuster on London, and Melina does her primal scream which does get a bit grating on the ears. Melina then gets involved when she hooks a headscissors on London from the outside while using the ropes for leverage, and Mercury gets a two count before hooking a submission on. London fights to his feet and breaks the hold before hooking a headlock on, but Mercury whips him off and both men clock heads. Kendrick gets the hot tag and hits a nice springboard dropkick on Nitro, and then he hits a pair of flying forearms on MNM before hitting a clothesline on Mercury and a back elbow on Nitro. He whips Mercury into the corner and hits a flying forearm only for Nitro to come from behind and hotshot Kendrick on the top rope, and then MNM hit the Snapshot on Kendrick only for London to break the pin up. Mercury knocks London out of the ring as Nitro goes for another pin attempt, but Kendrick kicks out and Nitro tosses him out of the ring. That was a nice flurry by Kendrick as he was looking good until MNM caught him and almost took the win with the Snapshot, but it was here that the turning point may be coming for the match.

Mercury drops Kendrick throat first on the apron and Nitro throws him back into the ring for a two count, and then he hooks a submission on Kendrick to again slow the pace down. I like the double heat segment here as it continues to put MNM over as a strong team though they can’t seem to figure out these two upstarts. Kendrick fights to his feet and breaks the hold before knocking Mercury to the floor, but Nitro gets a kick in only for Kendrick to block a suplex with a small package though Mercury distracts the ref which allows Nitro to kick out. Nitro drops an elbow on Kendrick and tags Mercury as they hit stereo legdrops on Kendrick, and then Mercury hits a delayed suplex on Kendrick and looks to be favoring his shoulder as he gets a two count on three straight occasions. He tosses Kendrick to the outside where Melina kicks at him and Nitro throws him back into the ring, and you can now see the desperation in the champions as they are trying anything to keep Kendrick down. Mercury hooks a chinlock on Kendrick while driving the knee into the back, and he drops an elbow on Kendrick before going back to the same hold as the crowd tries to help Kendrick get fired up. Mercury rams Kendrick into Nitro’s boot and tags him in as he goes for an arrogant pin only to get two, and he pounds on Kendrick for another two count. Nitro pounds on Kendrick and rams him into Mercury’s boot before tagging him in as Melina does another scream, and he stomps on Kendrick before hitting a snapmare and hooking another submission on. At this point, the restholds should’ve been more sparse as MNM could’ve used effective double team moves to wear Kendrick down instead of relying on restholds. Kendrick fights to his feet and tries to break the hold only for Mercury to get a knee in, but Kendrick then sends Mercury into Nitro’s boot and then he kicks Nitro into Mercury.

London gets the hot tag and knocks Nitro down twice before knocking Mercury down, and he pounds on MNM before kicking at Nitro and hitting a jumping back elbow. He whips Nitro into the corner and splashes him only for Mercury to catch him with a boot to the face, and MNM attempt a double team only for London to hit a double clothesline on MNM. London rolls Mercury up for a two count and Mercury sends London through the ropes, but London rebounds and knocks Mercury down before returning to the ring. Nitro comes up from behind and holds London only for London to dropkick him off the apron as he hits the moonsault on Mercury, but Melina screams right in the ref’s ear to stop the count in a pretty funny spot. Mercury rolls onto the apron and London tries to suplex him back into the ring, but Nitro trips London up with Mercury falling on top and Nitro holds the leg only for London to still kick out. This has been a great, fast sequence as MNM are trying anything they can to escape with the belts as it looks like London and Kendrick are going to pull this off. MNM pound on London until Kendrick comes in and tosses Nitro to the outside, and then Kendrick attempts a plancha only for Melina to shove Nitro out of the way and Kendrick hits the floor hard. Mercury whips London into the corner only for London to catch him with a pair of boots to the face as Nitro gets on the apron, and London goes after him only for Nitro to duck the shot and he holds London. Mercury charges only for London to move and Mercury knocks Nitro off the apron and onto Melina on the floor, and London rolls Mercury up which finally gets the three and we have new tag team champions. That was a great ending sequence as you almost bit on MNM stealing away the win, but it finally backfires on them and their losing streak as now cost them the belts.

After the match, MNM can’t believe what has happened and things finally look to start boiling over as Mercury argues with Nitro and Melina, and the crowd chants that they suck as Melina blames Mercury for the loss and Mercury shoves her back as Nitro tries to keep things calm. Melina shoves Mercury back and slaps him in the face as Mercury grabs her by the arm, but then Nitro knocks him down and the two men brawl with the crowd siding behind Mercury. Melina kicks Mercury in the head and goes after him as the ref pulls her off, but Melina hits a low blow on the ref as Nitro continues to pound on Mercury. Nitro and Melina leave the ring only for Mercury to follow them and he continues to pound on Nitro, and officials come out and finally separate the two men. It was a pretty sad end to such a dominant run for MNM and it seemed a bit out of nowhere, but as we will find out there was a reason behind it and they would eventually reunite down the line.

The match itself was very good as both teams worked hard and put on a really solid opener to this show. MNM has really hit their stride over this last year as the top team of Smackdown while London and Kendrick have also gelled incredibly well, and these two teams had some great chemistry after all these weeks and put on a great tag title match. It was a bit sad to see MNM’s run end after only a year, but as mentioned there was a reason behind it and you knew that they would get back together as some point. The crowd was pretty hot for the match and gave London and Kendrick a pretty big pop when they won the match. The question now becomes will London and Kendrick be just transitional champions to the next big heel team, or will they become the stalwarts of the tag division on Smackdown? We will see how things pan out over the year, but as for this match it is a great match and one of the best openers for the year 2006.