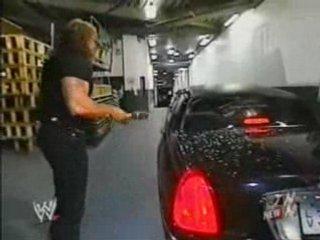 Ugh, I wasn’t looking forward to this one coming in. After their terrible performance in the six man mess at Backlash, WWE still plowed ahead with this ill-advised World Title feud. Nash didn’t look like a credible challenger after taking the pinfall defeat at Backlash and HHH really needed a good workrate challenger to play to his strengths and make this championship reign advance. Steph gives HHH a warning backstage to be careful. In storyline, they were still divorced at this time. Since Backlash, Nash took out his frustrations by destroying a limo and Jericho was helping HHH with an attack on Nash during a Highlight Reel segment. HBK is in the corner of Nash and hugs Earl Hebner as he parades around the ring. Nash’s music around this time was absolutely dreadful and as generic as you can possibly get. Since they are in Charlotte, Flair gets a bigger pop than any of the other participants.

Nash meets HHH in the aisle and HHH has his purple tights on again. We throw away the notion of this being a traditional NWA style title match right at the onset with Flair and HBK fighting to the back so they are gone after just coming out. Nash sends HHH into the steps shoulder first. Both men are in the ring and the match has officially started with HHH in a heap of trouble. Crowd reactions don’t mean a ton to me as examined in my Royal Rumble review but they can’t possibly give less of a shit about this match than they do right now. It was embarrassingly silent. Nash hits a back body drop and big boot and HHH is reeling. Nash hits three elbow drops and a clothesline, but HHH finally gets some offense with a swinging neckbreaker. This segment by Nash was awful because he didn’t have any focus and he just wasn’t mobile or able to convey enough intensity to get the crowd to buy that he wanted to get his hands on HHH at all costs. HHH’s flurry was short lived as Nash hits a clothesline out of the corner. Nash mounts HHH and rains punches and even gives Earl a shove. Earl responds by pulling Nash up from HHH by his hair. Crowd again breathes a sigh. Nash ducks a forearm and Hebner gets hit for a ref bump. Already? Is this a SmackDown main event? HHH hits Nash in the balls and he goes down for the first time in the match. HHH removes the turnbuckle pad to expose the steel. Nash blocks that attempt and finally we get a small smattering of applause at the sidewalk slam Nash delivers.

The problem inherently with this match is how much JR keeps yammering on about how these guys want to tear each other limb from limb. Nash goes for the Snake Eyes with boos and he again shoves Hebner. HHH sends Nash into the exposed steel and hits a pedigree. Notice how quickly HHH covered his buddy here. 1, 2…. NO, giving Nash some hope and somewhere Booker T was backstage shaking his head. Nash sends HHH to the outside but is still down from the pedigree damage. HHH finds his sledgehammer that the ring crew desperately needs for setting up the ring and he whacks Hebner with it. The bell rings and Charlotte shits all over this one. Nash hits the Snake Eyes on the exposed steel followed by a Jackknife Powerbomb. Nash then grabs the sledgehammer but for some reason all the other referees and officials save HHH by taking him backstage. Nash won’t stand for that and fights HHH to the announce booth as Flair returns with some chops that don’t do any damage. Nash decks Flair to some boos. Nash shoves HBK down and then powerbombs HHH through the announcers table. JR WAY oversells this as we have seen way too many announce table spots at this point.

Yeah, this was shit and not even entertaining shit like the Rumble match could be. After seeing this disaster, they still decided to go with a rematch. Bone headed decision making.