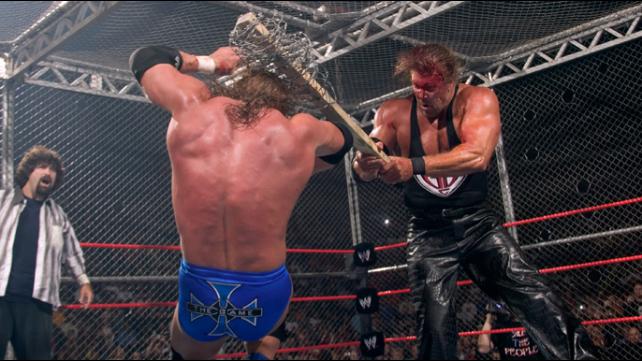 HHH (C) vs. Kevin Nash – Hell in a Cell for the World Heavyweight Championship with Mick Foley as special referee

Last month was a lifeless, terrible affair so this match needed everything in its power to try to inject some juice into it. The buildup involved Steve Austin announcing the Hell in a Cell stipulation to HHH. We also had confusion among the referees that goes all the way back to the Hell in a Cell match last May with HHH vs. Chris Jericho. Insert the return of Mick Foley. We get some nice WWE revision with them pretending the No Way Out 2000 match was Mick’s last one. Still, it was good to see Mick back as he had been gone for around 18 months when he returns here and still has a vendetta against HHH as shown in a Raw leading up to this show where him and HHH battle in the Cell. This allowed Nash to come in, powerbomb HHH and get the three count from Mick showing he can win this match.

Nash comes out first and looks more trim and ready to go than he did last month. He gets a decent response too so already things have improved. HHH comes out second in some cool blue tights giving Foley the big spotlight as the final person to enter the Cell. I really hated Mick’s makeshift official shirt and sweat pants as it looks so lazy and unofficial. Immediately, Nash gets a big boot and tries to send HHH into the cage. HHH blocks that attempt and quickly retreats back inside. A shove from Nash sends HHH into Foley. The action spills outside again and this time HHH goes back first into the cage off an Irish whip. A big back drop on the floor shows the early focus of Nash’s attack to be on the back of HHH. This has been problematic for HHH in matches we have seen on this journey for him to sell this body part with consistency. Nash maintains the attack with a sidewalk slam for a nearfall. A nasty steel chair shot to HHH’s back inflicts more damage. On the outside again, Nash keeps pounding away. Nash is certainly limited at this point in his career, but so far he has done an admirable job doing as much as he could with his limitations. HHH for his part has been selling the damage well and retreating at the appropriate moments. Nash hurls the steps which HHH is able to avoid.

HHH gets his first substantial offense of the match and sends Nash face first into the steps. Nash stops this and goes for a Jackknife which HHH is able to avoid mercifully. HHH busts out the toolbox under the ring which seems more sensible than a kendo stick or sledgehammer being down there. A hammer shot to the thigh and face gives HHH the hearty advantage. HHH rolls inside and gets in a shoving match with Foley. Nash is busted open which feels like an extremely rare occurrence. HHH grates the lacerated forehead across the Cell. One critique is that HHH isn’t selling any damage from the previous back work. That body part overall is harder to convey than a leg or arm you can limp or dangle, but him reaching back and stretching would have been appreciated. HHH drives the screwedriver into the forehead and they have added a gore aspect to this Cell match to increase the watchability. HHH grabs a 2X4 wrapped in barbed wire and hits Nash in the stomach. Good insult to Foley having to watch this.

Nash hits a right hand and starts mounting his comeback. Really weak transition there back to Nash on offense. Nash hits HHH with the 2X4 and HHH hits an absolute gusher as blood starts pouring and a grotesque amount. HHH has always been a great bleeder and this is one of his better efforts again trying to add a gore aspect to some less than athletically inspiring action. Nash hits the Snake Eyes face first into the barbed wire board mounted on the post and gets the closest count of the match. Nash retrieves the steps right in front of a Big Lazy sign. Awesome. HHH rolls out to the opposite side and whacks Nash with the crate that was housed under the ring. Now we have the sledgehammer in earnest being entered into the fray. Foley stops this and HHH goes for the steps again but gets dropped toe hold onto them. Nash grabs a chair and HHH hits the damaged leg again and then hits two knockout shots to Nash and then Foley. Foley is busted open now. Mick responds by getting out Mr. Socko and applying it to HHH. HHH hits a low blow to escape from that and I am not a fan of this interaction with Foley at all as it feels like shoehorning in a three year old feud with a decisive finish. Nash hits the steps on Foley and HHH and Foley is dazed while Nash covers him. Foley then takes another crazy bump from the apron into the Cell. HHH looks for the pedigree but gets catapulted into the 2X4 board. Jackknife powerbomb is hit and HHH is able to kick out which shows huge resilience for HHH. HHH hits a sledgehammer shot and one pedigree later ends this decisively for HHH.

Let’s look at all the gimmicks injected into this match:

That is a pretty long laundry list for a mediocre output. Thankfully, this feud can now be laid to rest.