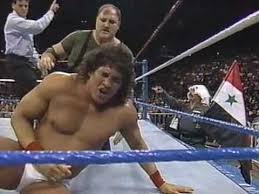 As we come to the end of 1990, there seemed to be a lot of flux occurring within the roster of the WWF as just a year ago, the roster was pretty loaded on about every level and now one short year later things have thinned out pretty badly. Since his return earlier in the summer, Sgt. Slaughter has been slowly climbing his way up the ladder though by this point he was still stuck in a feud with Nikolai Volkoff and it wasn’t sure what his future would end up being. However, the thing that would inadvertently help him is the ongoing crisis going on in the Middle East as he was taking his role as the Iraqi sympathizer and running strong with it as he was becoming one of the hottest heels in the company. On the flip side, Tito Santana was a man with no direction as after his brief mini feud with Mr. Perfect for the IC Title in the summer, he has pretty much been on cruise control and mainly putting people over. Going into the Survivor Series, Slaughter was going to lead a team against Volkoff and his team which included Santana and here on the Showdown, Santana and Slaughter would face each other to build some momentum for their team.

Since our last Saturday Night’s Main Event in September, Slaughter would continue his feud with Volkoff on TV and on the house shows while Santana would bounce between various guys on the house shows. On the 10/20 Superstars, it was announced that Slaughter would captain the team of the Orient Express and Akeem dubbed the Mercenaries and they would face the Alliance of Volkoff, Santana, and the Bushwhackers. A week later, it was announced that Boris Zhukov would replace Akeem on the Mercenaries and it was then announced that Santana would face Slaughter at the Survivor Series Showdown. Of all the potential matchups, this was easily the best one because you were guaranteed to at least get a decent match even though the main feud was between Slaughter and Volkoff, but thankfully they decided to go with this match instead.

Santana gets a good pop from the crowd while Slaughter was pretty hot as a heel as both men come out by themselves and the rest of the teams are forced to stay in the back. Slaughter stalls in the ropes to start the match and they lock up with Slaughter backing Santana into the ropes, but Santana avoids a shot and Slaughter stalls in the corner as they lock up with Slaughter hooking a headlock. Santana escapes and they engage in a test of strength as Slaughter reaches the ropes to force a break, and Slaughter gets a knee in and he kicks at Santana repeatedly before ramming the knee into his ribs. He catches Santana with a back elbow to the ribs and hits a snapmare before hitting a double stomp on him, and he hits a gutbuster on Santana for a two count and pounds on him as Santana tries to battle back only for Slaughter to rake the eyes. He rams Santana into the buckle and puts him on the top rope as he pounds on him and chokes him in the corner, and Santana kicks at Slaughter repeatedly and pounds on him only for Slaughter to catch him ducking with a kick. Slaughter hoists Santana up for a suplex and drops him on the top rope before stomping on him twice, and he pounds on Santana who surprises him with a sunset flip for a two count and Slaughter pounds on him. Santana battles back on Slaughter and pounds on him in the corner before whipping him into the other corner as Slaughter hits the post and tumbles over the top to the floor, and Santana goes outside and stomps on Slaughter before stalking Adnan and he rolls back into the ring. Adnan helps Slaughter back into the ring and Santana sets him up for a piledriver only to slam down on the back of Slaughter’s neck, and Santana goes up to the middle rope and drops a fist on Slaughter before dropping a knee on him for a two count. He hooks a submission on Slaughter who tries to fight to his feet only for Santana to grind down on him, and Slaughter gets to his feet only for Santana to bring him back down to his knees and Slaughter fights to his feet again before escaping with a backbreaker. Slaughter hits a delayed suplex on Santana and goes up top only to miss the big splash though he avoids a dropkick as Santana hits the mat, and Slaughter goes up top again only for Santana to grab him and toss him to the mat. Santana hits the flying forearm as Slaughter is sent through the ropes to the outside and Adnan assists him, and Santana pulls them onto the apron and rams their heads together only for Adnan to trip him up on a slam attempt and Slaughter falls on top which gets the three and wins the match. After the match, Slaughter and Adnan head to the back as Santana goes after them and he pounds on Slaughter as the ref keeps him at bay while Slaughter and Adnan escape to the back.

The match itself was decent as both men worked hard and put on a solid match. It’s funny because both men had been around for quite a while to this point yet Santana looks like he could still compete at a top level while Slaughter was not as good as he once was. To his credit, Slaughter did his best to keep up though it did seem like Santana slowed down a bit for him and it did feel like the match could’ve been better and it ended up being fairly average. But again, considering who was on the two teams this was probably the best combination to have because they didn’t want to blow off Slaughter and Volkoff yet, and no other combo would’ve resulted in a good match so you take what you can get. For what it was, the two men did have decent chemistry and Adnan ends up being the difference as he helps Slaughter win though maybe Slaughter could’ve used a clean win going into the PPV. The crowd was into the match and Santana, but are not happy when Slaughter gets the win. Slaughter steals the win over Santana and gives his team an advantage as both men ready to face each other at the PPV.