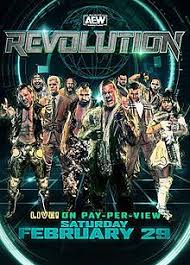 This is the column that ‘broke the internet’ and made me the most unpopular man in the nation in the process.  If you read the name of the column, that’s the whole point though, that I will write about something that flies in the face of the popular view.  I think a few people chose to ignore the fact that Cena-Umaga still made my list so I thought it was one of the best 100 WWE matches ever just no a super high placing.

This edition was going to be about Wrestlemania but then something more current took place that I wanted to focus on instead.  Apart from a couple of weeks over Christmas I have been watching and enjoying AEW dynamite, I decided on the strength of the last 3 weeks I was going to order AEW Revolution.  I was so excited going into the show but afterwards thanks to some of the matches underperforming, I felt flat.  I then read most of the reviews and opinions on social media that were describing it as almost a perfect show. My opinion is:

AEW Revolution was a 7/10 show at best

My first issue comes with the placement of the first match.  I have loved Dustin Rhodes so far in AEW and I’m sure Hager can still go but no way should this have been the opener.  In Sammy Guevara and Darby Allin you had the perfect match that should have been the opener for this show. Guevara-Allin is a very good sprint with about 5-10 minutes of high impact spots before the bell for the match even rings.  If you swap these two matches around I think you have a much better experience as a fan.

Even though this column is called ‘Unpopular Opinion’, I’m not going to swerve you all by claiming the tag title match is rubbish.  In my opinion, it’s my favourite match of 2020 so far and it will take something truly great to beat it for match of the year.  It is very rare that you have a match that is such a huge spotfest that also has such great storytelling within it.  The angle to lead up to the match was superb with such nuanced character work that you just don’t get nowadays.  The actual match is superb and well worth the 5 star ratings it has gotten.  The next match on the card was the woman’s match and for me this was the match that I had the lowest interest in which was reflected in the live crowd and the bookers placement of the match on the card.  The match wasn’t bad it was just there and no one was particularly bothered by it.

Our next match was between MJF and Cody, it was also the match I was looking forward to the most.  It has been a superb feud building up from costing Cody the title at Full Gear through to MJF putting down hurdles for Cody to climb over to get the match.  I appreciate the car this is chapter one of two in the feud but that didn’t stop me in being disappointed in how the match was structured.  This was a blood feud that was going to have a minute long headlock and armbar in it.  The result with MJF basically winning on a fluke was right because there would be no point having further matches if the face wins the opening match.  The journey that we got to get there could have been so much better though.

There are few wrestlers if you know about them that divide opinions more than Orange Cassidy.  You either love or hate him with seemingly no inbetween.  I definitely fall into the ‘love’s category, it’s always nice to try something different and not have everyone look and act the same.  In PAC, you had the perfect opponent because he is the angry counterpoint to Oranges laidback style.  I really enjoyed this match as you can tell PAC took it as a badge of honour to go out there and have Cassidys first match for the company.  This match over delivered on what I thought it could have been.

The main event between John Moxley and Chris Jericho closed out the show.  I know it won’t win me many points around here but I actually don’t mind Moxley and I even liked the Full Gear match with Omega.  I have been a huge fan of Le Champion during this AEW run, his promos have been great for the most part and the in ring work hasn’t been too shabby either.  My main issue with this match is it was no different than what we got out of two of them in the WWE.  I will say this for Moxley though: it was definitely the right time to put the title on him.

As you can probably tell this was a good show and even the matches I didn’t really like at least had the right results.  If you read some of the reviews for this show, some people were calling this an all-timer or a better show than Takeover: Portland which I just couldn’t agree with.  Revolution was a good show but it was missing that extra ingredient to make it a great show.  I would probably be even more down on the show if I would have had to pay $50 to watch it like you had to in North America.  I will continue to watch as I have been on the whole very impressed with AEW, I just wasn’t blown away on this night.

You can reach me on Twitter @benl1981. In the next column, I will be talking about a classic WrestleMania that I don’t think gets the credit it deserves.