Simply put, we don’t know. Many speculated in the run-up to this fight that George St Pierre would walk away from the sport after this fight, and after overcoming his toughest test by far I’m not sure who would have begrudged him that. Well, apart from Dana White. However, after the fight and some prodding from Joe Rogan St Pierre tentatively told the audience that he was stepping away from the sport for a while and hanging up his gloves temporarily, while he addressed some personal issues in his life. We still don’t know exactly what St Pierre meant by that, either in terms of how long he intends to be away or what exactly it is that is causing St Pierre to make this decision. It is entirely possible that GSP is just burnt out and beat up, especially after a bruising performance against Johny Hendricks. St Pierre admitted that, in the immediate aftermath, he could not remember most of the fight that had just taken place, and this is deeply concerning and should certainly be an alarm bell for the powers that be in the UFC. Just a week after Matt Stanmyre’s excellent piece on brain injuries in the New Jersey Star-Ledger, it is clear the UFC does not take these sorts of things as seriously as they should. Even if not suffering from a physical injury, it is possible that GSP’s mental health is not where it should be and that is not to be taken lightly. If a fighter doesn’t feel mentally capable of competing then that is a potentially dangerous situation – unless both competitors are physically and mentally fit to compete, especially in combat sports, they shouldn’t do it. 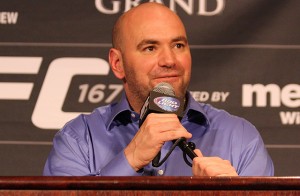 Is Dana White getting this one right?

Dana White was borderline apoplectic once the UFC 167 post-fight press conference began. Without even hearing St Pierre’s reasons for wishing to take a break from fighting, Dana White had decided that that wasn’t the sort of thing people, let alone professional fighters, should do. According to White, St Pierre owes it to the UFC, Johny Hendricks, the belt and the fans to come back and rematch the grueling fight he just went through. An odd statement indeed from the man who states often that he does not partake in matchmaking in the immediate aftermath of a fight. Dana White’s position on this seems rather shaky – if St Pierre flat-out will not fight in the immediate future, White has two choices: live with it, or cast him out. It seems unlikely to be the latter, given that GSP makes the UFC more money in pay per view terms than any other by some distance, and Dana White can’t exactly force St Pierre to step into the cage with Hendricks again in four months time. St Pierre has given so much to the UFC and make the company so much money that it seems distinctly off for White to be a) so cavalier about a fighter’s wellbeing and future and b) so insistent that he owes them anything. Pretty much anyway you slice it, an independent contractor owes his employer nothing he hasn’t signed a contract for. Perhaps even more concerning was White’s attitude maybe 45 minutes later in the press scrum where, after talking to St Pierre privately, he had decided that GSP’s problems weren’t as bad as the champion believed them to be. Whatever those problems or issues may be, one thing is for sure: Dana White telling GSP that he’s being silly about it isn’t going to make getting over them any easier.

Now, when it comes to the belt, Dana White does have some credibility. The belt is his (or the UFC’s), and if St Pierre is not willing to defend the belt in a reasonable timeframe then the UFC are well within their rights to either strip him of the title, or create an interim belt. The latter was the UFC’s preferred course of action with bantamweight champion Dominick Cruz, and after two years away from the cage due to knee injuries Cruz is set to step back into the Octagon in a few months. Will St Pierre be afforded the same time and consideration to overcome his personal issues that Cruz was for his physical ones? All signs make that seem unlikely.

God, no. ‘Robbery’ is a word that, at this point, basically has no meaning in MMA. Hendricks broke Dana White’s number one rule: “never leave it in the hands of the judges.” While some have claimed this is the biggest travesty in MMA history, it’s hard to see how in the cold light of day that holds up. While the vast majority of fans, fighters and reporters had the fight scored as 48-47 for Hendricks, it is entirely possible to see how the first round (the round which decided the fight) would go the champion. According to FightMetric, St Pierre landed 19 significant strikes to Hendricks 18 in that round, while Hendricks landed one more strike in total than the champion. On grappling the two  had a takedown each with one failure for the champion, while St Pierre had the only submission attempt of the round. While there are of course other factors to be considered in how that round is scored, those statistics alone show how not clear-cut the first round was. Everyone is entitled to their opinion, and I’ve seen pretty much every possible combination of scoring argued for by someone. Close, yes. Controversial, probably. Robbery? Please. Stop. 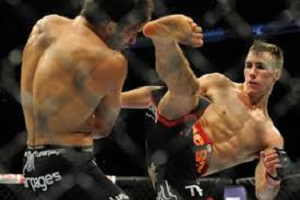 What next for Rory MacDonald?

The Rory MacDonald hype train came to something of a grinding halt on Saturday night, as the Canadian dropped a split decision to veteran Robbie Lawler. Lawler pushed the pace in a way that MacDonald had not really dealt with in a fight before, and did not allow MacDonald the distance and time to work the same sort of cagey offence that won him the fight against Jake Ellenberger. The striking of Lawler was a constant threat and the takedown defense prevented MacDonald from neutralizing that threat for most of the fight. MacDonald never looked like a winner or, for that matter, a potential title challenger for the winner of the night’s main event. Lawler on the other hand looked every bit as focused as he has in his previous two fights since returning to the UFC, and took a well deserved victory.

For MacDonald, perhaps a fight with Martin Kampmann, Demian Maia or Tarec Saffiedine (should he overcome Jake Ellenberger in January) would allow him to regain some momentum. For Lawler, I think I speak for most MMA fans when I beg the UFC to make a fight between Lawler and the winner of Carlos Condit .vs. Matt Brown. 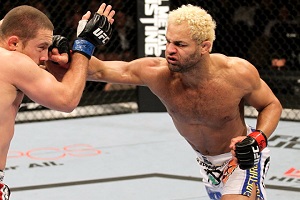 How long does Koscheck have left?

This question could be taken one of two ways – left before what? Well, maybe retirement. That was the suggestion from some on Saturday night as the 36-year-old drops to his third straight loss and second straight first round knockout. Dana White was unsupportive of these calls however, saying that he thinks Koscheck is “still one of the most talented guys out there.” He did however reveal that Koscheck had sent him a long message after the fight that, according to White, “sounded like retirement”. One thing is for sure, no amount of pressure will force Dana White to cut Koscheck. While just one loss was enough to signal the inevitable decline of fellow welterweights Yushin Okami and Jon Fitch in White’s mind and see them bounced from the UFC, White is unashamedly biased towards cast members from the original Ultimate Fighter season, admitting as much in the post-fight press scrum. Another TUF 1 alumni who is on a three fight losing streak is Chris Leben – he fights Uriah Hall at UFC 168 next month.