Three years after their first meeting, Anthony Pettis and Benson Henderson once again did battle for the championship – only this time they weren’t bringing down the curtain on the WEC in a spectacular finale, they were headlining UFC 164 for the right to be mentioned in the same breath as lightweight legends like Penn, Edgar, and Pulver. Henderson was on the cusp of history, a win in Milwaukee would have given him the record for most defenses of the lightweight title and avenged his loss to Pettis on the final WEC card, the only loss at 155 pounds in his entire career. However, he was unable to get that “Pettis stain off his soul”, and Anthony Pettis continued his streak of being the only lightweight to beat Henderson. Right at the end of the first round, after some good back and forth exchanges, Pettis managed to lock in an expert armbar that left Henderson with no option but to submit.

This was not the same highlight reel performance from Pettis, with his hard body kicks a far cry from the Showtime Kick, but his ability to unsettle Henderson and execute a gameplan against one of MMA’s top grinders and get a submission victory against a BJJ black belt makes him a worthy winner indeed. This now leaves the UFC and matchmakers Joe Silva and Sean Shelby with some very difficult paths to negotiate – Pettis had been due to go down to featherweight to fight champion Jose Aldo before suffering a knee injury that forced him out of the fight in early August. Similarly Henderson had been due to defend against TJ Grant who also got injured, allowing Pettis to step into the spot at UFC 164. So really, there are three very plausible match ups for Pettis that could be made – Aldo, Grant, or Henderson. The first would be interesting in terms of UFC management – Joe Silva manages the 155 division and those above it, while Sean Shelby is in charge of the lower weight classes. Is it likely that Shelby is allowed to book one of Silva’s champions? We shall see, maybe. The re-match with Henderson is maybe a fight for further down the line, as Pettis is now 2-0 against Benson Henderson. If Henderson can put together some more wins, maybe in a re-match against Gilbert Melendez or the previously scheduled fight with TJ Grant, he could be in line again given his previous dominance. Similarly Grant still has a claim on a title shot that he was promised, and has an impressive recent record. A Pettis/Grant match-up for the title would probably make the most sense in the immediate future, though perhaps in this “year of the superfight” we might actually get to see one with Pettis/Aldo. 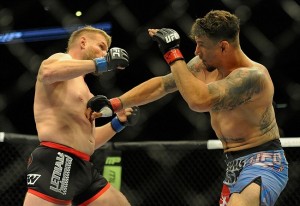 In the co-main event, Josh Barnett made up for his eleven year UFC absence by making light work of fellow former champion Frank Mir. The stoppage, coming just ninety seconds into round one, was somewhat controversial as Mir popped straight back up after the referee waved the fight off, but it did appear that he was out when he hit the ground. Still, perhaps he could have been given a little more of a chance to get back into it. Barnett proved that despite being around for a long time he is still a major player in the UFC’s heavyweight division who can put on very exciting fights. As for what lies in store for him, what about a fight with Alistair Overeem? The Reem needs a big win to get back in contention in the heavyweight division after losses to Bigfoot Silva and Travis Browne, and Barnett is the perfect scalp for him to try and take. Similarly, for Barnett, a former Strikeforce champion and number one contender in Overeem is likely to be the sort of opponent to get him highly motivated.

The main card provided entertainment from top to bottom last night, with Chad Mendes and Dustin Poirier putting on very impressive performances to defeat Clay Guida and Erik Koch respectively in the featherweight division. Much like 155 pounds, and even without the spectre of Anthony Pettis looming from above, the 145 pound division is quite possibly the most competitive in the UFC today with Poirier, Mendes, Cub Swanson and Ricardo Lamas all on impressive runs. Swanson was active on Twitter today, congratulation his fellow featherweights and throwing out the suggestion of a featherweight tournament. It’s been a while since we’ve seen a tournament in the UFC, and if I could pick any four contenders to put together in that format right now it would be hard not to pick those four. Spare a thought however for poor Erik Koch, who was at one point set for a fight with Aldo for the 145 pound belt before getting injured – only for the with between Aldo and Koch’s replacement Frankie Edgar to be moved to a card where Koch was fit to fight. Now on a two fight losing streak, Koch has quite a way to climb to get up the ladder again. 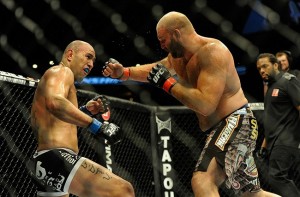 In other heavyweight action Ben Rothwell got the TKO victory over Brandon Vera on Vera’s return to the 255 pound division. Vera undoubtedly had the speed advantage in this fight, and used that to keep Rothwell at distance for most of the fight. However early in the third round Rothwell had clearly had enough of Vera’s evasiveness, and kicked into high gear with some flashy head movement and impressive flurries to get the win. This was Rothwell’s first fight since getting permission to use TRT and while we obviously can’t say for sure that was a defining factor – it certainly doesn’t hurt. Rothwell took home the award for best post fight promo, calling out Travis Browne for a fight the fans would go crazy for. After the Overeem win I’m not sure Rothwell is the most logical opponent for Browne, but Big Ben is right – that would certainly be a very entertaining scrap. 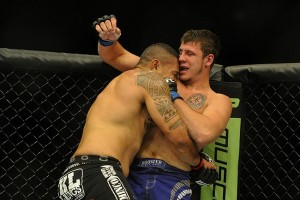 On the prelim card there were some equally entertaining fights, with veteran Gleison Tibau taking a split decision victory over former WEC champion Jamie Varner, Tim Elliot domination Louise Gaudinot to win 30-26 on two scorecards, and hometown boy Chico Camus taking a unanimous decision over Kyung Ho Kang. Fight of the Night however went to Hyun Gyu Lim’s TKO victory over Pascal Krauss. Despite the fight lasting just under four minutes, the intensity on display clearly caught the attention of the UFC brass. On the early Facebook prelims second generation star Ryan Couture came up short against Al Iaquinta who was coming off a year long lay-off following a stint on the Ultimate Fighter and Magnus Cedenblad submitted Jared Hamman with an expertly executed guillotine choke from the top mount after just 57 seconds. However, the stand out fight of the Facebook card has to be Soa Palelei’s TKO victory over Nikita Krylov – though for all the wrong reasons. Pictured above just a few minutes into the second round, it took a matter of minutes for both fighters to become completely exhausted and much of the fight was comprised of them lying on each other is varyingly uncomfortable positions. When finally Palelei was able to knock Krylov down, it took the referee what seemed like an eternity to stop the fight – Krylov was doing nothing but covering up, but Palelei had no energy left to make his strikes in any way impactful. Definitely not one that was ever going to be replayed on the pay per view, I would imagine both will be getting a stern lecture on conditioning.