Do you remember when John Cena won the world title from Edge, by finishing two laps ahead of him in the men’s freestyle swimming main event at the Royal Rumble?

Neither do I, yet apparently swimming ability plays a HUGE part in whether or not someone is “tough enough” for the WWE.

Two episodes into the season, I am struggling with the show’s format. As I already described in detail during my episode 1 review, Tough Enough seems to struggle greatly from not knowing what it wants to be as a show. The upside of a show that feels disjointed and almost like 3-4 different shows in a way is that the actual contestants are delivering for the most part. Good personalities and people to root for (and against!) is usually strong enough to combat any flaws of the show or contest itself.

Let’s jump right into things-you don’t need to know what happened last week, but some forgettable muscleman went home. First let’s talk about the challenges: A “courage” challenge required the contestants to swim through a swamp to a boat, retrieve an NXT title belt, and swim back. Why would this take courage? Because there was an alligator off in the distance. Not surprisingly, everyone found the courage to take a swim. Diana (by the way, I swear last week it was spelled Dianna) destroyed everyone and it wasn’t even close. Winning the challenge earned her….well, nothing really. This was mostly uneventful except for the following things: Tanner may or may not have cheated, ZZ didn’t finish last and Daria dropped the belt, which infuriated Billy Gunn because of reasons.

Here’s where I disagreed with what the edit was trying to get me to feel: Alex couldn’t even finish the challenge, and he was portrayed as being a quitter, but the guy could barely swim! If it’s truly a COURAGE challenge, wouldn’t the guy who CAN’T SWIM attempting to swim anyway be the most courageous effort? I truly felt for Alex after this challenge and thought they piled on him unnecessarily.

AND THEN HE STARTED TALKING BACK AT THE HOUSE. Spoiler alert if you haven’t watched the episode yet: Alex is eliminated this week. Why? Probably because this guy has the stupidity to state in an argument with Patrick that he doesn’t need to know anything about pro wrestling to be a successful pro wrestler. That sound you heard was the collective groans of longtime indy wrestlers everywhere, hoping immediately for Alex’s demise. Meanwhile, Patrick was the voice of fans everywhere.

Now, I need to stop for a second and explain that I think this is the fundamental flaw with the format of this show. In reality TV, while everything that happens is “real”, the editing team still has a narrative that they choose to go with. Take Survivor for example — the season is played out, then they have months to edit the show. Knowing how it all plays out, they can choose to make anyone the hero and anyone the villain, sometimes using small, inconsequential moments but presenting them as massive shifts in the dynamic of the story. Sometimes the hero loses, but more often than not, they win and vanquish the bad guy.

The problem with Tough Enough is not that they have no characters. They are certainly editing contestants as villains — Alex, Tanner and especially Diana are being shown to be very unlikable. On the other side of the coin, they’re giving us some clear cut good guys in Patrick, ZZ and Sara Lee. I’d also throw Daria and Mada into the good guy camp, but to a smaller degree. But for a story to be satisfying, the good guy needs to BEAT the bad guy. After two weeks, I would say the best ending for Tough Enough would be Patrick beating Tanner in the finals and Sara Lee beating Diana. Yet, they never get to “beat” them, because the eliminations are done via fan voting.

Ultimately, the eliminations are not that satisfying because, yes, a bad guy went home in Alex, but not at the hands of the good guys. Patrick had no say in Alex’s elimination, and neither did ZZ. It was a hashtag that did him in. I feel like if they keep this show going with fan vote eliminations, then there needs to be some challenge/talent element to it. Bumping, working a match, cutting promos, SOMETHING. I feel like this is a major flaw in how the show is edited and produced.

Now that I’m done ranting, back to the episode, we had a second challenge of sorts, where the contestants did some flat back bumps and then one off the top rope. This is what they need more of! Fans would love to get more looks at what it takes to BE a professional wrestler, not who can swim the fastest. Show us the bruises from running the ropes, show them learning how to do collar and elbow tie ups. Yes, it’s a reality show, but it’s still edited, and the WWE has the power to craft whatever story they want with it! Make it a story of how grueling professional wrestling training is and the winner is the only one who is truly tough enough to survive it! It’s not rocket science!

This was a nice segment and showed what the show can be — bringing in stars (Roman Reigns this week) to show the contestants some tricks of the trade and walk them through it. We also got Bull Dempsey on TV for some reason. He jumped on a guy….and that was about it. It was weird and I’m not even sure what to say about it. 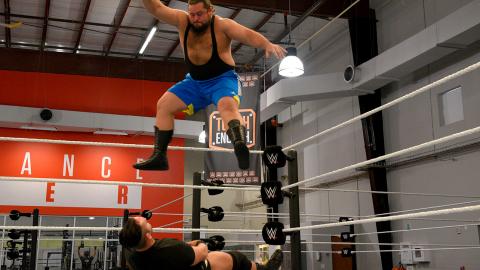 Beyond the challenges, we’ve got some developing stories in the house: Diana is greatly disliked, Tanner and Josh are ready to go at each other, Patrick respects the business, and ZZ is ZZ. When they focus on the relationships and the characters, the show is easy to watch and entertaining. But we don’t get enough of that. They’ve got to share time with pointless challenges and….the judges.

I’m not quite sure what purpose the judges serve that Billy Gunn, Booker T and Lita couldn’t already do. I guess it gives Paige a chance to show personality and depth, but there’s not much else. Daniel Bryan smiles and laughs too much and Hogan is kayfabing it way too much. Paige comes off as someone who is serious about choosing a winner at least. I can’t say I liked her pick this week — she chose Sara Lee because she wasn’t on screen enough. Unless Sara Lee edited the episode herself, I’m not sure how that’s her fault. But that’s a minor gripe, as she was safe, and Paige did a good job.

Overall, we’re still in the early stages of the game and while I have major problems with the format of the show and the voting procedures, I am happy that we are losing dead weight and keeping the personalities. Could you imagine if ZZ and Diana had been the first two eliminated? This season would be flatlining already. As it is, it’s got a pulse, but the contestants are fighting an uphill battle trying to entertain in a show that focuses heavily on challenges that don’t matter, judges that weigh in solely on the edited material and fans who have just minutes to vote.

Now, let’s see where the remaining contestants stack up in our weekly power rankings! Just like last week, I watched the episode with my son Isaac, and we’ve both compiled our list of who we like the most/think have the best shot at winning.

1. Patrick – Being shown as a true wrestling fan will bode very well for him in getting votes from other wrestling fans. (+1)
2. Daria – Billy Gunn yelling at her for losing the belt only helped her IMO, as we saw her softer side from crying. (-1)
3. ZZ – I wanted to put him up this high last week, but was wary that the judges would just keep putting him in the bottom three. Thankfully, they didn’t this week and his personality continues to shine. (+4)
4. Tanner – Developing into a nice cocky heel which is bad once the fans can vote for him, but I can see the judges being instructed to keep him around for tension (+1)
5. Mada – He sucked at the challenge, but that doesn’t matter in this show. We also saw his family and that he’s got a kid. Keep pulling on those heartstrings, Mada! (-1)
6. Sara Lee – I think the viewers will keep her around, and I really liked her answers to the judges, but Paige holding it against her that the show didn’t include her in the edit was jarring. She may get picked on by the judges and take ZZ’s spot of the perennial elimination nominee. (-3)
7. Amanda – Her biggest downfall is that she looks like Dianna, but she’s doing a very good job so far. (-1)
8. Giorgia – Bumped pretty well, but still seems very bland. (+2)
9. Josh – The big fellas aren’t holding up too well in fan voting, which doesn’t surprise me. It’s interesting that in the Tanner-Josh rivalry, Josh comes off as the babyface. But I don’t think it’s because he’s all that likable so much as Tanner plays the heel. (+2)
10. Dianna – In the biggest shock, Dianna isn’t last. (+2)
11. Gabi – I said last week she would be kept around for drama, but Dianna took that spot right away from her. What else does Gabi have to offer now? (-3)

Dianna is still near the bottom of the list; let’s see if she can survive another week and send another one of the boys home!