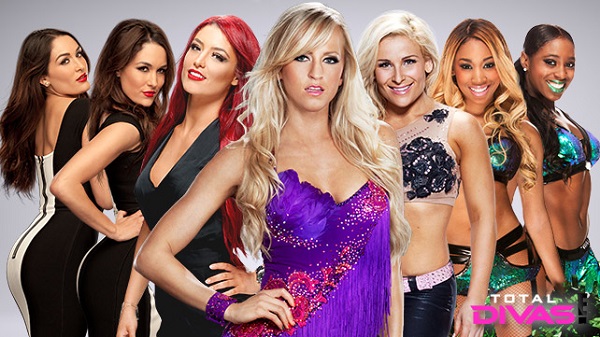 When Place to Be Nation sought out a correspondent to watch and write about the new WWE/E! reality show Total Divas each week, they initially wanted a “female voice.” Unfortunately for them, lifelong wrestling fan Ben Morse also happens to count Melrose Place among his all-time favorite shows and already has every other E! show on in the background via his lovely wife Megan, so he whined until they let him do it.

Jen Engle doesn’t watch wrestling or E!, but the Powers that PTB roped her into this anyway.

Find out what happens when one overly enthusiastic dude and a lady who has no idea what’s going on talk about a weekly “reality” show focusing on the female side of WWE.

Brad: Hi Jen! It’s great to be back talking Total Divas. As Ben noted last week, we sent him on a no-expenses paid trip to New Orleans so he’s off enjoying WrestleMania week in the Big Easy. He’s doing some Total Divas work while he’s on assignment as our legal department received a release form from him so he can appear on the show! I’m not even making that up.

Jen: Hi Brad! Thanks for stepping in! Although, maybe next time you should volunteer to go on assignment. Ben is clearly having a great time down there. That is awesome! Hopefully he doesn’t leave us to be on camera with them full-time though…

Brad: Last time on Total Divas, Bryan got a bus and they invited the bulk of the cast to ride along. Eva Marie went through the ringer (do they still use that expression?) when Ariane shared some Google images of her from a darker time in her life. And Nikki avoided the man she desperately wants to have marry her because she lost a tooth. The show ended with Eva Marie flat-out telling Ariane off and not accepting her apology; a moment that I had a ton of respect for.

Jen: A lot of strange things happen when you put a bunch of people together on a bus apparently. I may not like Eva Marie all that much, but I was definitely on her side. I wouldn’t have accepted that apology either, and I’m glad to see that she didn’t stoop to Ariane’s level.

Brad: BUS UPDATE: Jon Uso has an out of this world sex drive that is being stunted by Bryan’s bus rules. Summer Rae and Eva Marie have bailed given the drama from last episode, which just gives them more time to complain about Nattie. The whole gang is touring around Texas right around the holidays at this point. Brie complains to Nikki about all the other girls just wanting this to be about magazine shoots and not about wrestling. I’m not sure Nikki is one that will sympathize here.

Jen: I have to wonder if the producers pushed for and paid for this bus just for the drama that would ensue. It’s pretty clear that Summer and Eva Marie are all about the magazine covers, but yeah I don’t think Nikki is the right person to complain to in this situation. Nattie may have been a better choice.

Jen: As inappropriate a conversation this was for work, it was pretty hilarious.

Brad: Back on the bus and Ariane is complaining about the party on the bus being dead and Bryan absolutely zings her by asking if anyone wants to talk about contemporary global issues. The whole group teases her a bit about her god-awful song and Bryan just piles on with the “tingle, tingle” line and asks if she wants that to be the message she’s sending to her future daughter.

These hijinks segue into Nattie screaming from the bathroom. But before we find out what’s wrong, I have to ask: What is up with these Rock in Rio commercials for a concert that will be in Las Vegas sometime in 2015? And there are TONS OF THEM.

Jen: Ariane’s song is awful. Go Bryan for asking her if that’s the message she’d like to send to her future daughter. Ariane is clearly in all of this for the magazine covers and the “fame”. Maybe she thinks that she’s the next Paris Hilton? I’m sure her long-lost sex tape will be out soon.

There were so many commercials for that concert, I have to wonder why when it’s over a year away! I mean, who is playing at this concert? I don’t recall any confirmed acts. If I’m going to spend a few days at a festival, I am not going to buy tickets unless I know who I’m going to see. They probably want to build up the hype so they can entice the big acts to actually play it.

Brad: I’m with you there, although my festival days are long behind me at this point. So Nattie got Icy Hot in a sensitive region (multiple regions apparently) and Bryan is all over her for pooping on the bus and then trying to change her story on where she was rubbing. I think we all learned a real-life Icy Hot disclaimer notice here. But then in a nice moment, Nattie grants her first wish for the Make-A-Wish program. Really cool stuff.

Jen: Poor Nattie! Yeah, so she broke Bryan’s rule #1, but I think she paid for it dearly. That sounds like it was awful and painful and it was probably very uncomfortable for a while. And there wasn’t much that she could do about it because…she was on a bus.

Jen: I guess he lives up to his nickname then, doesn’t he? The look on Trinity’s face when he said that was fantastic. He was definitely in trouble that night.

Jen: We didn’t see Summer’s entire conversation with Bryan, but she was clearly flirting with him. I’m sorry but I can see where her reputation is coming from. I think Brie had a right to tell her to stay away from her man, but I do think it got a little out of hand. I am surprised whenever I agree with Eva Marie. And I did again here. What is going on here?

Brad: Bryan coaches up Brie to “be the better person”. I have to say, the one week Ben isn’t around we get a LOT of Daniel Bryan. Summer tries to apologize to Brie with Nattie around but Brie isn’t having it. We get some clips of Bryan wrestling the Usos and he takes a nasty bump which concusses him. In real life (we’re into January now) there were reports of the concussion and we were all worried he’d miss the Royal Rumble. But it’s just a five-day break and Bryan heads home. (Site note: we get a Bruno Lauer sighting here as he takes Bryan to the airport. Justin and Scott interviewed him previously).

Jen: I think Summer needs to learn to read the room and not push Brie when she clearly doesn’t want to talk to her. Plus, her fiancé was in the ring with the Usos at that exact moment and I think it’s safe to say her mind is on other things. I’m glad Bryan is doing okay, that was a pretty scary bump!

Brad: Eva Marie is thrilled her action figure is in and in her words “someone can legit play with me now”. Which was weird. Summer joins the party and throws some blatant shade Nattie’s way about the action figure looking so much better than Nattie in real life. So forced. But more importantly, Summer Rae is 30 years old and a former Ladies Football League player. I’m not making that up.

Jen: Summer was being a catty bitch to Nattie for the cameras and it was stupid. This is the sort of crap I can’t stand about “reality” shows. In the real world, this stuff doesn’t get you anywhere. Good luck growing up, Summer.

Brad: Nikki and Brie talk about how toxic the other girls have been so in lieu of a sit-down brunch, we get a circle of folding chairs in the empty catering area. Summer sucks up to Brie and she forgives her. Eva Marie, a beacon of wisdom, shoots Ariane down during her apology, stating it wasn’t the pictures, it was the malice and intent to hurt her. Damn right. Summer claims she always been respectful to Nattie but Nattie isn’t buying. With the pow-wow over, Nattie goes and talks about Summer to Total Divas-favorite Fandango (her tag team partner). Fandango, all about candidness, shares what Nattie said as what Summer does affects him (truth). This will not end well.

Jen: I’m glad they had this little pow-wow, but I doubt it did any good in the long run. Ariane doesn’t deserve forgiveness yet if you ask me. Nattie isn’t helping her rift with Summer in this episode. She doesn’t have to like her but she doesn’t need to spread the gossip around, especially to Fandango (his creepiness factor was maybe a 7 out of 10 this episode, I’d call that an all-time low for me).

Brad: Summer Rae WILL NOT LET THESE GIRLS PUSH HER AROUND ANY LONGER. She shows up at Nattie’s house (!) to call her out for gossiping. Summer then breaks out a “if you spent all that time you gossip into your career, you’d be somewhere else” (inferring a much higher status). Nattie calls Summer phony, and then says she’s on the verge of being a stripper and that’s why she’s 30 and single. And then we get the slap heard around the WWE Universe as Summer belts Nattie, who then pushes Summer off her porch. Wow. Was anyone right here? Both came off as pretty crappy.

Jen: There are so many things wrong with this situation. You don’t show up to someone’s house to call them out like that! They both had some pretty low blows and some cheap shots. Summer is calling Nattie out for being unprofessional, but what does she think she’s doing?! And the slap! Wow, is right Brad. Great message to send to all the kids that look up to you Summer. Looks like she and Ariane are going to be great role models.

Brad: Next time we have Nattie playing up a bloodied nose and apparently needing some kind of surgery. What a slap! Jen, it’s been fun. Thanks for letting me sit in for the irreplaceable Mr. Morse. I’ll keep you posted if he ends up signing a contract with the show.

Jen: Looks like that slap was a little more serious than we though. I am sure that this going to make the Summer/Nattie situation even worse.

It was great having you Brad! Don’t be a stranger! And I’m not just saying that in case Ben doesn’t come back to us…