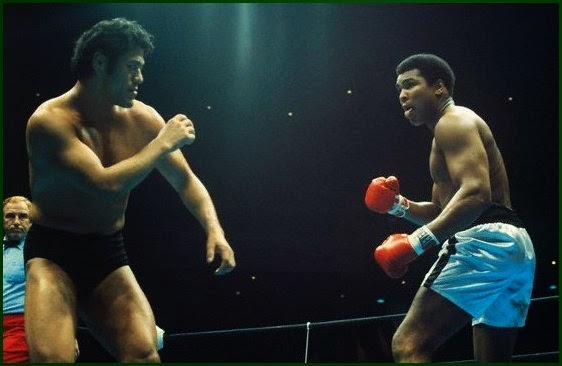 As part of the first Titans-Two-In-One, Kelly and Johnny discuss the road to the infamous boxer vs wrestler match between Muhammad Ali and Antonio Inoki from June 25 (26 in Japan), 1976! Among the fantastic footage discussed:

And then, Mystery Titans Theatre has Kelly and Johnny look at, not only all 15, um, interesting rounds of Ali vs Inoki, but also the forgotten classic (seriously!) between Andre the Giant and heavyweight boxer Chuck Wepner from Shea Stadium. Here’s the audio track (Titans Extra! – also on the feed) for the Ali vs. Inoki fight and the video for Andre/Wepner:

So listen to the road to the fight discussion on Titans #62, then watch the fights on Dailymotion, and finally come back to the pod as Kelly and Johnny wrap things up and make some important announcements regarding future podcasts.

Titans-Two-In-One! Because JUST a podcast on one of the worst matches of all time is not enough!

As heard on the show, you can support Johnny’s friend in her battle against cancer here: