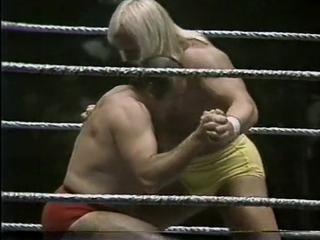 Join the Titans as their world is turned upside down when they venture into the realm of total pro wrestling absurdity. (No five-star matches here folks!) Kelly assumes the hosting seat and is joined by the rest of the Fabulous Four–Johnny, Pete and Parv–for a look at wrestling that would cause smarks to break their fingers on their keyboards from pounding away in disgust faster than the latest rant about the misuse of Daniel Bryan. Yes! This is the Unspecial.

-Johnny’s take on the “Champagne Man” Gerry Morrow and, arguably his masterpiece, Robert Shaw describing the Shark Cage match
-Opinions on legendary wrestlers who keep working the indy circuit
-A bio for Pete Doherty, the “Terry Funk of jobbers”
-A couple of stoned clowns convince Ken Patera to wrestle for the first time in 18 years, despite him now looking like Pete’s uncle
-Dominic DeNucci: Don Rickles to Bruno’s Frank Sinatra

BONUS! Video playlists of the matches for this episode of Titans of Wrestling can be found here and here.

Don’t forget to check out the entire Titans of Wrestling archive, as well as subscribing options here.