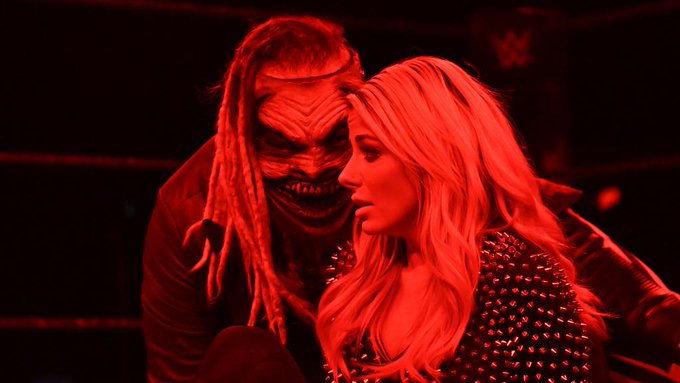 Last week, I called for a bit of reflection and honest from the WWE. And I think they delivered a solid week on the rebound.

I’ll admit, it didn’t start well as the first couple hours of RAW wasn’t exactly must see TV with Nia Jax and some questionable booking messing things up. But, Sasha Banks title win and Dolph Ziggler vs. Drew McIntyre’s Extreme Rules match changed the momentum. Add in The Legend Killer’s new lust for the WWE Championship and they were off in running!

Keith Lee carried the torch over to NXT with a career best promo on Karrion Kross along with a strong presentation in the ring Wednesday night.

And how about SmackDown on Friday! The Fiend unleashed again, FINALLY!

Plus, I’ll say this – the shows “sounded” better with some renewed energy. It’s a good start and no, one week doesn’t make everything ok, but it sure makes everything better than it was 7 days ago.

It’s a positive sign as we head to the year’s next major PPV at SummerSlam. I wonder if the rumors of the WWE trying to hold it outside on a beach or in the NorthEast somewhere in front of a small crowd come true. If nothing else, it would be a visually pleasing change for a night. And what’s with the announcement of a Payback PPV just one week after SummerSlam? Brings back shades of Tuesday in Texas back in the old In Your House Days as The Undertaker took on Hulk Hogan in back-to-back weeks on a PPV.

Dominik Mysterio – OK, I’ll admit it’s a bit of a stretch, but damn, that was some nifty kendo stick wielding Monday night. It looks like the kid might be able to handle himself. We’ll see in the upcoming weeks and we’ll have to see if Dear Ol’ Dad sticks around to see it. See what I did there…

Drew vs. Dolph II – While I don’t think we needed a rematch one week later, I give big time props to Drew McIntyre and Dolph Ziggler for putting on another amazing match. This time it was Extreme Rules for everyone and they did not disappoint. Kudos to both for putting themselves through another brutal physical match just one week after their first one at the Horror Show at Extreme Rules PPV. Dolph, even in defeat, helps steal the show.

Randy vs. Drew – The two hottest stars on the men’s side of Monday Night RAW are now set for a collision course at SummerSlam. Sure, once Randy Orton made his feelings for the WWE Championship known at the start of the show, we all knew an RKO was coming to end the night for McIntyre. Still, out of nowhere, a feud that could be one of the year’s best has begun!

The Main Event – There’s nothing wrong with Sasha Banks and Bayley holding all the Women’s Gold in the WWE! Sasha has earned it now with a win over Asuka Monday night. The odd part of it is that the WWE used Bayley’s attack on Kairi Sane to make it happen. Of course, this tactic has been used time and again over the course of wrestling history. No shame there. It’s the fact that Sane is now gone from the WWE and they let Sane tweet about it during the show. Very strange indeed to those on both screens at the same time. But, mind you, only 13% (give or take) of Americans are actually on Twitter so take it with a grain of salt. It just shows lack of detail. Great feud somewhat overshadowed by a sidelight. Now, what does Asuka do next?

Nia vs. Shayna – Why on Earth did they waste my time with not one, but two segments that settled nothing. Jax just lacks depth on-air and it’s the same ol’ story. A battle between Baszler and Jax would be fine if they just let them go. But, to give me a short brawl followed later in the night by a useless (and short) count out was pointless. If you want them to fight, let them fight. Don’t waste our time.

Monday Night Messiah – If Seth Rollins is that influential and The Messiah, why does he only have one minion? You would think after months of saying he’s a cult leader, he would have a bigger following. Plus, what exactly in this continuing obsession with people’s eyes? I was hoping that would be left in the past with Rey Mysterio, but now it’s Aleister Black’s turn as he is on the shelf with arm and eye injuries after this week’s attack by Murphy and Rollins. I guess it’s Dominik Mysterio’s turn to take on the MNM. Let’s hope he continues to bring us to the Extreme with more than kendo sticks. But, it was a nice start for the younger Mysterio.

Tag Team Titles – I love what The Street Profits bring in and out of the ring and now they have a new challenger in Andrade & Angel Garza. They are so many ways they can go to get to their Tag Team Title Match at SummerSlam too. Maybe we’ll get a Bianca vs. Zelina side story too to make things interesting. Either way, the matches should be fun and if done right, it’s a pairing that could (and should) last on and off for the rest of the year.

Where’s Apollo – C’mon WWE – just be honest and let us know the deal with Apollo Crews. If it was just a neck/disc injury, wouldn’t Crews have done an interview segment at least? Maybe the rumors of Crews having COVID-19 are true and if they are, the WWE would be serving the superstar and its audience better by being honest.

Keith Lee – Hands down, the best promo of Keith Lee’s NXT career. No BS. Straight forward. This killer feud with Karrion Kross and Scarlett will be epic!

Io & Friends – What a start to the night! Io Shirai is such a bundle of non-stop energy in the ring! It was a very strong tag team match in which Shirai goes over Candice LeRae after Dakota Kai leaves LeRae stranded alone in the ring.

Shotzi – I get a smile when Shotzi comes on the screen. Even knowing she would face a tough battle against Mercedes Martinez, Blackheart brings the tank-riding run to the ring. I really want a Blackheart vs. Sasha Banks match if not for the hair color battle alone! She’s entertaining each and every week.

Triple threat ending – What was a decent main event and a fine match (how’s that for underplaying the main event!), it sure turned out to be a very clunky finish. With Timothy Thatcher trying to submit Finn Balor and his injured knee, Dexter Lumis puts out Thatcher to get the victory. It’s an easy way to skirt out Balor from being pinned or submitted and it’s another week of a “surprise” winner heading to TakeOver:XXX for a chance at the North American Title. This new land of opportunity is making a look for the underdog winner each week now.

Johnny vs. Roderick – No pun intended, but these two put on a hell of a match.

Looking forward to it:

Imperium vs. The Undisputed Era – After a few months on the backburner, we finally get our Imperium vs. TUE match next week for the tag team titles.

Pat McAfee vs. Adam Cole – While I think it’s a smart idea to bring that social media/reality drama to the TV side with Cole going ballistic on McAfee’s show, it did seem odd that Cole was on the show but didn’t have any comment on it. Something to watch down the road and probably just a product of late editing to the show.

Sonya’s Surprise – She’s back and not done messing with Mandy Rose! Deville’s dominance continues as she not only beats on Rose, but mocks up her make-up and cuts her blonde locks too! It’s one of this year’s best feuds and I’m glad it is back on as we head to SummerSlam. I’m guessing we get a Hair vs. Hair Match coming soon.

Firefly Fun House and more – It was stale and then awesome! At the beginning, we’re asking ourselves how many times is Bray Wyatt going to tell us no one is safe when “he,” The Fiend is set free? When’s the last time The Fiend, or Wyatt for that matter, did anything heinous as when he first started out? Then, to end the night, he’s out there giving the mandible claw to Alexa Bliss! Awesome! It’s only a matter of time before she’s trying to turn Braun Strowman in person, right?! Well done!

AJ’s Title Match – Nobody really tough Gran Metalik would beat AJ Styles for the I-C Title, but we knew it would be a good match. And that it was. A very solid way to kick-off the night.

Big E – The build to a possible title run in the future begins now for the biggest member of The New Day. A nice victory over The Miz, who seems to be there to put people over at the moment, is a decent way to get things going without Kofi Kingston and Xavier Woods. It is kind of odd though how Michael Cole and Corey Graves act like Big E has never wrestled singles before and won. He’s a former NXT and Intercontinental Champion.

Bayley vs. Nikki Cross – A good back-and-forth match that was really never in doubt. Of course, it did get us to plant another seed in the Cross/Alexa Bliss splitting and The Fiend’s attack on Bliss. So, in that, it did its job.

King Corbin – Is the King about to build a band of merry men around him? Corbin was courting Shorty G Friday night and I’m sure he’s not done. I like the idea of KC being the leader of a not-so-sunshine band.

Moving on – Just in case you were wondering where some of those who left the WWE have gone to these days, here’s an update. The Good Brothers, Karl Anderson and Luke Gallows have joined Eric Young, EC3 and Heath Slater in Impact Wrestling. Matt Cardona (a/k/a Zack Ryder) is now with AEW. Lio Rush wrestling this past weekend for GCW.

Coming up this week:

Thanks for letting us share our thoughts! Shoot me an email at jcrowe567@gmail.com. We’d love to hear your comments and suggestions! You can also check out my blog, The Crowe’s Nest as we delve into more pro wrestling, sports entertainment and the World of Sports. My apologies ahead of time – I AM a Patriots, Red Sox, Celtics and Bruins fan! If you’re not down with that, I’ve got TWO WORDS for you… NEW ENGLAND