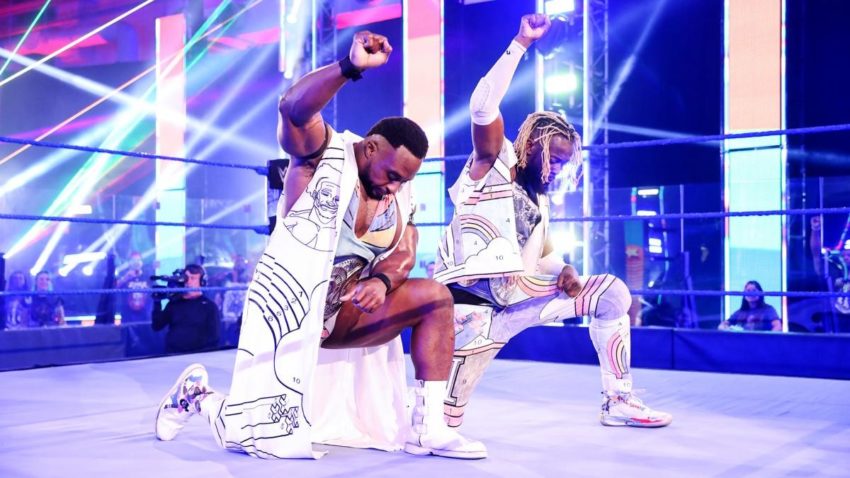 If nothing else, the times are busy in the WWE these days. Two PPV’s within a week of each other with NXT TakeOver: In Your House and Backlash bookending our Sundays, a change in the creative of RAW and of course, the three shows themselves. Never a dull moment indeed.

First, let’s take a look at the NXT PPV.

Another solid night as Adam Cole not only survived seeing his two teammates from The Undisputed Era, Roderick Strong and Bobby Fish kidnapped by Dexter Lumis, but triumphed over The Velveteen Dream, cementing his final shot at Cole’s NXT Championship. I thought the Backlot Brawl was well done as I had reservations, they were using the whole cinematic match genre too much lately. But the use of the cars as weapons worked and it brought Lumis into the feud too. Most thought, unlike me in my predictions, that TVD would come out on top, but I like the fact Cole remains on top for his next challenge.

Plus, Io Shirai stole the night and stole a sneaky pin to win Charlotte Flair’s NXT Women’s Championship, flying off the top rope to pin Rhea Ripley while Ripley was in the figure 8 from Flair. Keeps Flair strong and unpinned and brings the NXT Championship back full-time to Wednesday nights.

Surprised that Keith Lee beat Johnny Gargano, but as we saw on Wednesday night, there’s still more to be done in this feud.  And yes, while Damian Priest brought a good fight to Finn Balor, Balor needed the win as he sets his sights a bit higher in the future.

As for the creative change, I was hopeful when Paul Heyman was put in charge of RAW but still thought that it was handcuffing a genius. Heyman is awesome with guiding the edgy storylines and pushing some superstars that need it. We saw that in the rise of Andrade, Angel Garza, Austin Theory, The Authors of Pain and Dana Brooke. But it just seemed like some of the details were missing and we had a lot of 50-50 booking on RAW. With Bruce Pritchard now overseeing both RAW and SmackDown, let’s see if the ideas are still split or if there’s more of an umbrella type booking for the time being. Needless to say, no crowds have hurt and that could be changing with more things opening up around the Country as we try to get back to normal, whatever that is, due to the COVID-19 pandemic. A few words of advice for Pritchard move forward – think out-of-the-box, have common sense and don’t forget the details, they matter.

The New Day – Kudos to Big E, Kofi Kingston and Xavier Woods! Not only are they the SmackDown tag team champions, but they are leading the way in the WWE with their leadership and voices they’re leading to the Black Lives Matter movement. Symbolically, Big E and Kofi kneeled with one hand raised during their ring entrance on Friday night. But before then, on their podcast, there were powerful words. I just wish the WWE would put this kind of content on their shows to bring to a wider, mainstream audience than just what’s on social media. Like CM Punk’s opinion last week on WWE Backstage, it would bring a whole new dynamic to the type of change we as a Community are looking and hoping for.

Predictions are below….after we take a look at the Week that Was for RAW, NXT and SmackDown.

Asuka & Charlotte – Anytime you can get Asuka & Charlotte in the same ring twice in one night, it’s a good thing. Plus, we get the Women’s Tag Team Champions in on the fun as Bayley & Sasha Banks come to RAW for a night. The only downside of the night, and yes, we know it was a predictable one, was Nia Jax interfering in the main event costing Asuka a win over Flair. I don’t love the fact that the RAW’s Womens Champion loses on the go-home show before a PPV, but I understand why they did it.

Peep Show – Christian was spot on putting Edge in his place before pumping him back up for his Greatest Wrestling Match Ever against Randy Orton this Sunday. There’s no substitute for chemistry my friends.

Drew vs. Bobby – Nice build up to their title match Sunday with both looking strong all night. Lashley gets a win with MVP over The Viking Raiders while Drew makes the save after the match. Can’t wait for the physicality Sunday night!

Triple A: Apollo vs. Andrade again – Do we really need to see this match again? I’d rather see Crews vs. Kevin Owens get some more time than they did on RAW a few weeks back. Plus, I think we can all see Angel Garza getting a little payback on his faction brother, right?

Just for grins and giggles:

Charly and Angel – Can we just get these back together on the love train already? It was fun with the flirting but it’s kind of been put to the side the past few weeks. Charly Caruso needs her love and so do we! And oh by the way, not enough Zelina Vega this week. The Ariana Grande look rocked, but she was oddly quiet after being “injured” by Andrade.

Tick. Tock. Challenger – That was a seriously special moment to end NXT as Scarlett brings the hourglass to the ring after Adam Cole’s successful NXT Championship Title defense against Dexter Lumis. The look on Cole’s face of fear not that Karrion Kross is in his crosshairs was awesome. This should take the title picture on Wednesday nights to a whole new level.

Kacy gets a shot – Yes, I’m biased since I’ve watched Kacy Catanzaro since her American Ninja Warrior days, but I loved that they gave her some time in the ring against Dakota Kai and actually got some good offense in too. Kacy’s better than just being used as a person in the crowd, so I’m glad they saw that. I hope it continues.

Hello Mr. Escobar – El Hijo del Fantasma is not only the new NXT Cruiserweight Champion, but now he’s the new Santos Escobar and is the leader of the Mexican Masked Mafia. With an unmasking and a beatdown of Drake Maverick, it’s a whole new chapter for Mr. Escobar.

Balor vs. Lee – So, Finn Balor wants a shot at the NXT Title he hasn’t won yet – the North American Title. I’ll take it. I wonder what Johnny Gargano thinks of all this as I don’t quite think he’s done with Mr. Lee just yet.

Simply Phenomenal – I think we can all agree that if there were to be a Greatest Wrestling Match Ever this weekend, it would not be Edge vs. Randy Orton, but the one Friday night between AJ Styles and Daniel Bryan. Anytime these two hook up, it’s good, but with the I-C Title on the line, this one was top notch. I’m hoping it’s not just a one-off either. Give these guys an Iron Man Match or a best of three series.

The New Day – While we didn’t love the champs losing again on TV, something the WWE is seemingly in love with these days with their champions, we applaud The New Day’s tribute to the Black Lives Matters cause as we said above, making them the stars of the week.

You’re In – See what we did there?! The Jeff Hardy/Sheamus drug test to start SmackDown was just silly. Shades of the Attitude Era silliness with not enough edge. Plus, you can say “pissed off” but you can’t say “pissed on” on broadcast TV? Well, that just makes no sense. At least the backstage brawling was better to put the spotlight on Sunday’s PPV match.

Main event – If the 6-man tag team match with Braun Strowman joining Heavy Machinery to face The Miz, John Morrison and Dolph Ziggler was supposed to make me want to see the Universal Championship Handicap Match at the PPV, it didn’t. There was more of a spotlight on Otis/King Corbin and Mandy Rose than the champion, the Miz or Morrison. A total miss right there.

Overall: I don’t see much changing on Backlash as far as titles go. Drew is too strong right now on RAW, but expect the feud with Lashley to continue. It would be foolish for Strowman to lose again in another handicap match. Look for Randy Orton to get some revenge on Edge for WrestleMania. There’s no way Nia Jax is beating Asuka – same can be said for the Women’s Tag Team Titles as the new champs shouldn’t lose their first title defense. Apollo Crews’ push should continue as well.