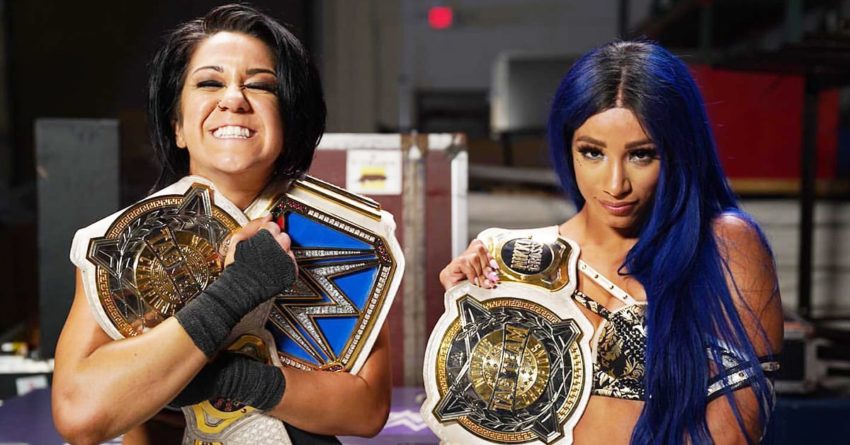 Happy 4th of July everyone! It’s surely a much different Holiday this year as COVID-19 has put all of us in a new normal for our daily routines. So, no, there won’t be the huge July 4th fireworks crowd, but instead more intimate backyard bbq’s and yes, unfortunately no baseball.

It also means no big wrestling extravaganzas around the Summer to celebrate either. Any thoughts of getting crowds back into the WWE have been seemingly set aside by the spikes around than 30 states in the past two weeks. So, let’s enjoy what we have and that my friends was a very strong week on all three shows. My nod to the tops of the week – NXT with a holiday themed Great American Bash!

Sasha Banks & Bayley – Three shows again this week and they were standouts on each and every one of them. Banks taps out Asuka on Monday night before the green mist gets the revenge on Wednesday night as the Empress trumps the Boss. Bayley rounds out the week with a DQ win over Alexa Bliss due to Nikki Cross’ blindside on the champ. Week in and week out they are carrying the women’s division at the moment. They even gave themselves a nice little tribute to boot too!

Double contract-signing chaos – Loved, loved, loved getting both contract signings out of the way to start the show and instead make it an in-ring main event as champions Asuka & Drew McIntyre took on their Extreme Rules challengers Sasha Banks & Dolph Ziggler. Contract signings are things of the past and predictable as hell. So, I appreciate the out-of-the-box thinking having Samoa Joe in the ring with chaos already ensuing to start the program. Plus, the main event was very good to boot!

Welcome back Ricochet – It’s nice to see Ricochet back, even in defeat to Bobby Lashley.

How many times can we…

Get Seth Rollins, Murphy, Aleister Black & Humberto Carrillo together? – It’s getting stale. Plus, here’s a thought to Rollins character of the Monday Night Messiah. If he truly is a Messiah, shouldn’t he have throngs of followers by now just not the same two guys to do his bidding? Either go full in cult or not.

Have MVP win – For a guy who seemingly retired after one match against Rey Mysterio in his WWE return, MVP sure does wrestle a lot and win. Now, we get a victory over the US Champ? Hmmmm. I get it, he needs Bobby Lashley to do it, but still. Can we make Apollo Crews look a bit stronger first before we tear him down? Ultimately, I think he makes the turn to heel town and joins MVP down the road.

Pay tribute to The Undertaker – Damn, they are really try to sell us that that Boneyard Match was his final match, I guess.

Where was Liv Morgan – Sure thought Liv Morgan was going to save her former friend Ruby Riott against The IIconics but I guess that vacation took precedent.

Andrade & Angel Garza – Another week of win one, lose one for the Zelina Vega boys. I think it’s time to let these two fight it out for better or for worse. And speaking of that, can we get Angel & Charly Caruso together already! LFG!

The entire show. I thought that night 1 of the Great American Bash was entertaining from start to finish. The only thing I would’ve done differently is maybe to roll in some historical highlights of GAB of the past. Sure, Mauro Ranallo gave us some historical context during the Strap Match between Dexter Lumis and Rodrick Strong which was nice, but some video could’ve put the cherry on top of the sundae.

So, what stood out?

Two amazing matches starting out of the box with the #1 Contender’s Fatal 4-Way Match. Who honestly saw Tegan Nox winning? Not me for sure! The back-and-forth was well done. Candice LeRae getting triple-team was expected and sets up next week’s street fight vs. Mia Yim.

The main event between Io Shirai and Sasha Banks was top notch including a wonderfully placed shoulder slam against the barricade by Banks to Shirai. Asuka’s arrival with the Green Mist was nice surprise too to help Io get the win.

In between, the Strap Match was better than expected although I thought for sure Strong was going back in the trunk!

Thatcher vs. Locan was a damn physical old school match too.

Rhea Ripley continues to win me over while adding some personality to her in-ring skills. Beating Aliyah and Robert Stone brought some levity to the show.

First hour – That was SOMETHING! If you are a wrestling fan, that was some kind of first hour with two amazing matches! Matt Riddle backs up his upset over AJ Styles two weeks ago with a second SmackDown victory, this time over John Morrison that was athletic as hell! Then, on the heels of that, Drew Gulak and Styles brawl it out before their match that was equally as good. Plus, I LOVED that they made AJ look strong with the victory. A very strong and smart 60 minutes, probably the best hour of the week.

Second hour – After such a strong hour, it seemed like hour two was just more set-up than quality. Getting just five minutes of Alexa Bliss vs. Bayley before Nikki Cross interfered for the DQ was a little disappointing, but set up next week’s tag match and of course, leads more for Cross vs. Bayley at Extreme Rules. The same can be said for Kofi Kingston vs. Shinsuke Nakamura. It was all to set up next week’s tag team title match.

A Toast to Jeff Hardy – Just not into the whole storyline of Sheamus mocking Jeff Hardy’s trouble with alcohol and substance abuse. Week after week of the same message just isn’t appealing for me. Plus, it’s just in bad taste IMHO. It was fine for a hook for one night, but they need to move on. Plus, was that main event slot worthy? I think not!

Back to the Swamp – I’m just intrigued how they will put it all together in the swamp when old friends Braun Strowman and Bray Wyatt take the Horror Show to Extreme Rules.

Sasha & Bayley – LOVED that Sasha finally got back at Bayley for all her “Sasha will fight you now” by having Bayley fight Bliss Friday night. The back-and-forth between these two over three shows each week has been very entertaining.

Renee Young’s big announcement – Well, she definitely had the internet buzzing with the rumors of a big reveal this week. Could she be joining hubby Jon Moxley in AEW? No, just putting out a cookbook! Should be tasty! Congrats Renee and here’s to a speedy recovery from COVID-19!

Wednesday Night War – Well, for the second straight week, NXT beat AEW in total viewership – 792,000 vs. 748,000. In the demo ratings, AEW is still the victor so still lots of stuff to crow about on each side. Quality stuff from both continues if you ask me.

Coming Up This Week: